Did Tiger Woods Give Jason Dufner a Stanford-Red Car? 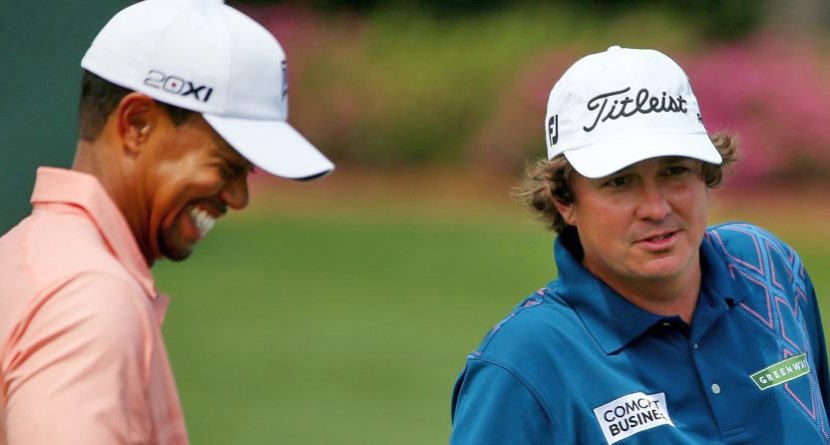 Surely Jason Dufner was honored, initially, when he was selected to play in Tiger Woods’ charity event this weekend, the Northwestern Mutual World Challenge. It’s an 18-man invitational with only players from the top 30.

But he’s made such a stink about not being able to watch his beloved Auburn Tigers, who play on Saturday, that he may have gotten what he deserved.

On Monday, the Duf Daddy tweeted to Tiger, asking that he reschedule the tournament to run Thursday and Friday with 36 holes each day. That would leave Saturday open for Dufner to watch the SEC Championship Game. “Petition denied,” came the surprisingly swift reply from Woods.

Later that night, Dufner reached out to John Daly, who once had a TV installed in his golf bag.

Since @TigerWoods is not being nice, I need your bag @PGA_JohnDaly that has the TV on it for next Saturday. pic.twitter.com/JeKC2TsoYX

That, of course, was inspired by the legendary “Caddyshack” movie:

It could be a Caddyshack kinda day, Saturday in Thousand Oaks. Let’s dance ! pic.twitter.com/DoPChMSJ3c

Woods, it appears, had enough of Dufner making a mockery of his tournament. Whether or not Woods himself is in charge of doling out the courtesy cars for players at his event, we don’t know. But Dufner thought it was suspicious that he was the only one to receive a redish-maroon car.

@TigerWoods is the color of my courtesy car some kinda joke? Everybody else has a silver one. Not cool. pic.twitter.com/nWTgWNtWrq

Is that Stanford red to show that Woods’ alma mater is also playing this weekend, in the Pac-12 title game? We think it is. And we think that’s awesome.

Or it could just be a red car to make sure Dufner has to drive around in the host’s favorite color. Either way, well played Mr. Woods.