Did We Just Witness Greatest Ryder Cup Match Ever? 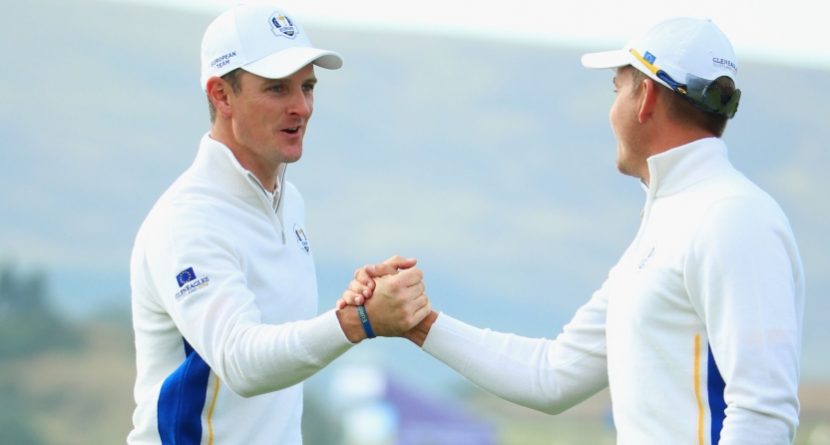 GLENEAGLES, Scotland — “Where legends are forged.” The words adorn every grandstand at Gleneagles. And in the greatest match ever played in any Ryder Cup anywhere, at least four legends were forged in steel Saturday during the morning four-balls on the second day of the 40th Ryder Cup.

Justin Rose, Henrik Stenson, Bubba Watson and Matt Kuchar scored 21 birdies between them in 16 holes — 12 for the European pair, nine for the Americans. The Europeans also recorded 10 successive birdies. Every one of those statistics represents a record. On top of that, Rose managed seven birdies on his own.

Before we go any further, let’s get a couple of things straight. First, the Centenary Course at Gleneagles is not easy — far from it. Second, there was a stiff breeze blowing at Gleneagles, so scoring conditions were far from ideal.

How then is it possible for four golfers to produce such an astonishing display of stroke-making and putting? And make no mistake about this: All four men contributed to a round that nobody wanted to finish and that everybody who witnessed it will remember for the rest of their lives.

Watson is a one-off, and the crowd just adores him. As is his wont, he worked the crowd into a frenzy once more and the noise was deafening as he stood over his opening drive, smashed it miles and opened up with a birdie that put the U.S. ahead straight away.

There are signs that Rose may well have inherited the Ian Poulter mantle this time. He played beautifully on Friday and was quickly off and running again Saturday. A birdie at the second squared the match. Watson, reveling in the atmosphere, hit back with a birdie of his own at the third. Rose and Watson each birdied the fifth before Kuchar made a two at the sixth. Then it was Stenson’s turn to birdie the seventh. Rose then holed a 20-footer for a three at the eighth. It was breathless stuff. They had managed eight birdies in eight holes and were all square.

The sensational golf continued, with the ninth, 10th and 11th holes all halved with birdies. Rose and Stenson had reached turn in a better-ball score of 31, but still couldn’t shake off Watson and Kuchar. By the time they reached the 12th, Rose had already managed five birdies of his own.

When Stenson birdied the 12th and Rose the 13th, and Stenson the 14th and 15th, the Europeans had managed nine birdies on the trot and were 11-under par but just 2-up. Inevitably, Rose came up with another birdie at the 16th to close out the match 3 and 2.

So what is it about the Ryder Cup that brings out something in golfers that perhaps even they don’t know they have? Consider this: Rose and Stenson have both had their problems. For Rose, there were all the missed cuts at the beginning of his career and a couple of spectacular slumps in form. And exactly the same thing applies to Stenson. At times during his career he has played like a world-beater; at others, he has looked like he couldn’t hit a barn door if it was six feet in front of him.

Both players have a terrific work ethic and a sense of knowing how lucky they are to be at the top of their profession. Rose is not a demonstrative man, and he probably won’t recognize himself when he watches coverage of the past couple of days. Stenson is different. He possesses a will of iron and, like Tiger Woods in his prime. If you had to bet your life on somebody holing a 10-foot putt, Stenson would be the man.

Watson is different. Very different. He is all bash and bluster. Hit it, find it, hit it again and hole it out. He loves being the center of attention, he is highly emotional and deeply patriotic. Many see him as an individual but he loves the team ethic, enjoys being with his buddies. And he gets along really well with Rickie Fowler and Hunter Mahan. He is a mass of bubbling adrenaline and he has somehow found a way to control it.

The other Ryder Cup star is Ian Poulter. What you need to know about Poulter is that he played off a handicap of five when he turned professional and nobody gave him a prayer of making it on tour. So he loves proving people wrong — and he is very good at it. He wanted to be a soccer player, and was devastated to learn that he wasn’t good enough. Soccer in England is followed by loud and passionate supporters, and Poulter is a typical football fan. Like Watson, he also loves the team environment and if you cut him the chances are that his blood would be blue and yellow.

He admits that he finds it difficult to get as motivated for the majors as he does for the Ryder Cup, and that is a great pity. So you can imagine his disappointment when he played so poorly in the opening four-balls with Stephen Gallacher. A birdie at the first got him going when he partnered with Rory McIlroy on Saturday, but we had to wait until the 15th and 16th holes to see the bulging eyes and the chest beating, a holed chip for birdie and a miraculous birdie four bringing out the very best in him.

Sure these guys are different. But they are also different from one another. It is the Ryder Cup that brings out whatever special qualities it is that they each possess. And long may it continue to do so.