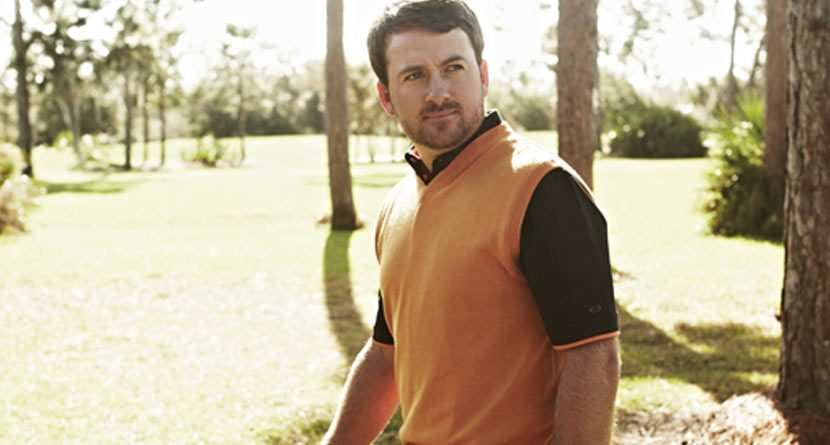 My head is still reeling after visiting the U.S.A. for the PGA Merchandise Show a few weeks ago.

The standout moment of the show for me was a chance to meet up with Graeme McDowell at the Kartel booth where he was launching his GMac By Kartel apparel collection for 2013. It’s funny that I have to travel 4,000 miles to meet up with a guy who lives just up the road but that’s global warming for you.

Amid the literally hundreds of booths that dot the white carpets of the two football fields that make up the apparel section of the show, you could count on one finger the amount of PGA players that actually show up personally, let alone spend two hours chatting, shaking hands and posing for photos with clients and fans. Yes, ladies and gents, GMac is one classy guy. The boss at Kartel, Karl Swan even showed me Graeme’s SMS to him after the show in which he expressed his excitement at the day and his prediction of a great year on and off the course. Like I said, classy.

I got the opportunity to do some video with GMac at the booth and we filmed the “60 Second Beer Mat Challenge,” which consisted of 30 rapid-fire questions devised by drunk people around the bar the previous night at the Bahama Breeze and frantically scribbled on a stained beer mat. “Fail to prepare, prepare to fail,” as my daddy always said.

Before I left Orlando, I got the chance opportunity to meet again with Karl Swan and we chatted about the GMac By Kartel range and the positive impact it was having on the company. It’s less than two years since Graeme sat down with Karl to discuss the prospect of designing a clothing range and this year was only the company’s second time showing it’s wares at the show. Now GMac is the standout fashion guy on the PGA Tour and the GMac By Kartel range is in every pro shop in every top golf club in America.  While the island of Ireland in deepest darkest recession, this a truly remarkable success story.

Even before he had his own clothing range, Graeme was well known on the Tour as a fashion expert. For any young pro wondering what colours matched, how many millimetres the slits at the bottom of the trousers should be, what were the best fabrics, they asked GMac. He himself at the time was purchasing cashmere sweaters and cardigans from Kartel after inquiring to Padraig Harrington as to where he was getting his snazzy outfits!

But in chatting to Karl, I was quickly reminded that overnight success usually takes years to happen. Karl’s dad, Alan, has headed up Kartel since before the wheel was invented and it has been there at some of the greatest moments in the sport.  Take for instance in 1999 when Jean de Velde took off his socks and messed up the 18th at Carnoustie; the winner Paul Lawrie wore a cashmere sweater with the words “KARTEL” neatly embroidered on the chest.  Major No. 1!

Then there were the glory years with Padraig Harrington as he added two Open Championships and a U.S. PGA wearing exclusively Kartel clothing.  And probably the nicest story was when amateur Shane Lowry won the 2009 Irish Open in a playoff.  As he was carried shoulder high in the rain from the 18th green, Lowry peeled off his raincoat to thank Alan and Karl for their support by showing off the Kartel logo.

So keep an eye out this year for Graeme McDowell in his GMac by Kartel Tour apparel as he attempts to become the fifth Kartel Major Champion. Now where did I leave that beer mat?!