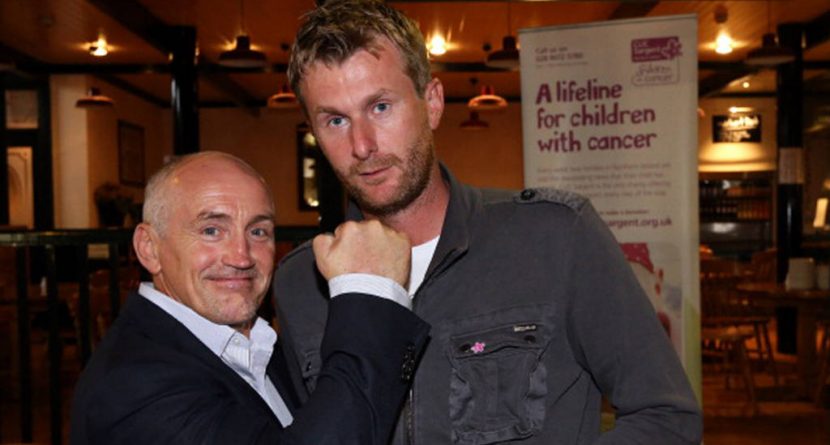 This week, one of the European Tour’s brightest characters and biggest pranksters is set to kick off his PGA Tour career at The Humana Classic.

David (follow him on Twitter @davelynndawg) sat down with me for one of those cryptic Q&As before he boarded his transatlantic flight. Be warned neither man is noted for speaking the truth. Doc: Why the PGA Tour, mate? You’re a legend in Europe, the King, the Don. Why are you leaving us?
Lynn: Finchem asked me to go out. He says they are running low on crazy bastards over there and they need me. Apparently the only comedian they have since Tiger got caught is a guy called Ben Crane. I heard he even stole my helmet and goggles look.

Doc: How long are you headed out for? Did you have to get a visa sorted?

Lynn: I’m going out there for two months starting at the Clinton event this week. I have an American passport. But don’t worry, as Arnie says “I’ll be back.”

Doc: You have an American passport? Seriously?

Lynn: Yep and a British one. Dual nationality, Doc. Was given U.S. citizenship a few years back by Bill. I helped broker a fragile truce between two warring countries over a game of golf. I can’t even remember who they were, mate; I’m rubbish at geography. I think one of them might have been Israel but don’t quote me on it. Anyway I got summoned to Capitol Hill by the big man, we shared a fat cigar and I got handed my U.S. passport. I’ve been back several times since on consultancy work. I sat down with Obama a few weeks back; we talked about using a wedge to get over a fiscal cliff.

Doc: Amazing stuff. So what’s your aim on the PGA Tour?

Lynn: Aside from trying to earn a shed-load of cash and somehow getting it all back into my bank account without paying so much as a single cent of tax on it, my main aim is to qualify for the U.S. Ryder Cup team. Then when I get back home, I’m going to try and qualify for the European Team. If everything works perfectly, I should be playing myself in the final day singles at Gleneagles in 2014. That’s the plan. Doc: Sounds logical. So what’s your biggest fear about living in America?

Lynn: Electrocution, that’s the big one. And snakes. Besides that my biggest fear is how Americans will see me. I’m 7 feet tall, as you know. The American golfing public will have never seen an athlete as tall as me before; they may react violently. I’ve heard the fans can be hostile to foreign players who are not Irish. It may be difficult for the American audience to take when they see me open a whole can of comic whoopass on guys like Bubba Watson. I’m talking videos, tweets, hit singles – the works. Who is Bubba Watson anyway? He’ll look more like Tom Watson when I’m finished my stand-up routine.

Lynn: No. I’m saying he’ll look really serious and uninteresting next to me.

Lynn: Oh I give up dude, I’ve a plane to catch. Next stop America!