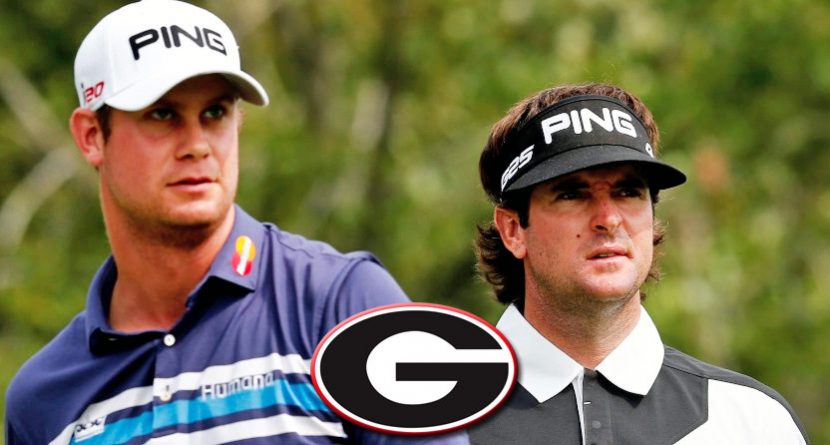 The 2014 PGA Tour season is almost over and while many are quick to tag it as “the year of Rory,” that hasn’t necessarily been the case. Sure, as an individual, McIlroy’s performance has been tremendous — but it’s nothing like the year the University of Georgia Bulldogs have had on the PGA Tour.

Since the 2013-14 season began last October, UGA alums have done nothing but win. Everyone knows about Bubba Watson and have come to expect him to win, but what has been most impressive in this Bulldog run is the depth of talent the school has turned out. According to Rivalscup.net, Georgia alums have racked up more than $21 million in earnings this year — more than twice the amount of Georgia Tech, the No. 2 school on the list.

Here’s a look at the six Georgia Bulldogs who have tasted the sweet nectar of victory this year on the PGA Tour: Bubba Watson (Graduated 2008) – Northern Trust Open, Masters:
Beginning with the most obvious and most notable UGA alum, Bubba Watson has been one of the tour’s brightest stars since he broke through at the Travelers Championship in 2010. Since then, he’s collected five PGA Tour wins — including two Masters titles. One of those green jackets was won this past April during a stretch of golf that saw the long lefty post only two finishes worse than T-9, collect two wins, two runner-up finishes and a third-place showing during the first six months of the season.

Harris English (2011) – OHL Classic at Mayakoba:
Harris English may not be playing the quality golf he’d like to be right now, but early in the year, the highly-touted Georgia product played brilliantly. From late last October until the end of February, English showed the golf world what he was capable of, rattling off eight top-11 finishes — including his second PGA Tour win at the Mayakoba Classic. In 2011, English joined then-Bulldog teammate Russell Henley as one of the three amateurs to ever win a Web.com Tour event when he was victorious at the Nationwide Children’s Hospital Invitational. Russell Henley (2011) – Honda Classic:
Speaking of Henley — the guy who won in his maiden PGA Tour voyage at the 2013 Sony Open in Hawaii — he also collected a win this year on tour. In March at the Honda Classic, Henley fended off Russell Knox, Ryan Palmer and Rory McIlroy to raise the trophy and celebrate career win No. 2. Like English, Henley joined the tour following a highly decorated career as an amateur that saw him win the Haskins Award in 2010.

Brian Harman (2009) – John Deere Classic:
Brian Harman’s dreams came true this summer at TPC Deere Run when he held of Zach Johnson in a playoff to collect his first PGA Tour win — and the seventh of the season for UGA alumni. Harman’s win earned him an invitation to the Masters this coming April, which will be just his fourth start in a major championship. In 31 starts during the 2013-14 season, Harman has eight top-25 finishes, including a T-3 showing at the Northern Trust Open. Chris Kirk (2007) – McGladrey Classic, Deutsche Bank Championship:
Though there may be nearly 10 months between them, Chris Kirk has won twice on the PGA Tour this season. His first triumph came at home in Sea Island, Ga., when Kirk captured the McGladrey Classic. Almost 300 days later, Kirk collected title No. 2 on the year (and the third of the 29-year-old’s career) at the Deutsche Bank Championship. Along with the two wins, Kirk has four top-10s and has finished in the top 25 in nearly 50 percent of the tournaments he’s started. He also posted a runner-up finish at the Sony Open in Hawaii.

Brendon Todd (2007) – HP Byron Nelson Championship:
Brendon Todd played out of his mind from about the middle of May until the second week of July. The stretch began with him picking up his first career win at the HP Byron Nelson Championship and ended with a T-4 at the Greenbrier Classic. During that time, Todd added two top-10 finishes, a top-5 and a very respectable T-17 at the U.S. Open.

Related Link: 5 Things You Need To Know About Russell Henley