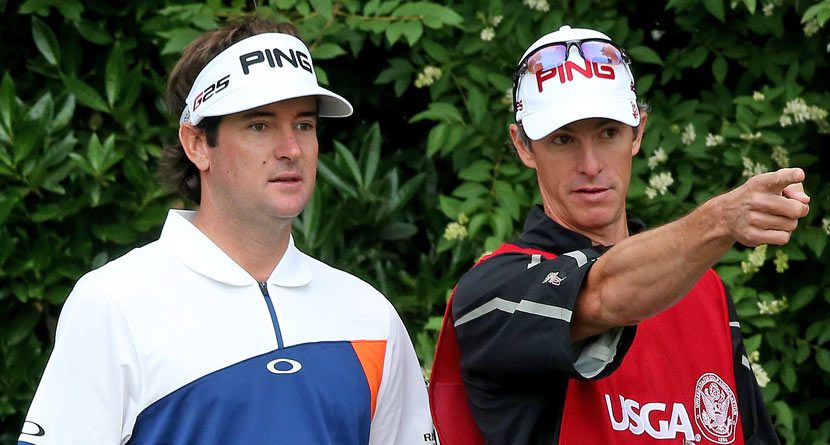 I am one of the few people, it seems, who felt more sympathetic towards former Masters champion Bubba Watson following the conclusion of last week’s Travelers Championship (the first half of which, incidentally, my hibero-anglophone brain insists on pronouncing either tra-veel-ers or tray-veel-ers) than at the tournament’s outset.

Having read countless irate blog posts and comments in the days since that fateful final round, during which furry, cigar-shaped microphones listened in as Bubba admonished his caddy for making a catastrophically poor club selection on TPC River Highlands’ 16th hole, thereby sending the Floridian plummeting from the summit of the leaderboard,  I realize this places me in an infinitesimally small – or perhaps just silent – minority.

Yes, as much as it pains me to do so, I’m coming out in support of the multimillionaire with a penchant for on- and off-course tantrums, public displays of the most vulgar ostentation and ignorance, not to mention a “heritage not hate” approach to the deployment of Confederate flags.

But hear me out.

More often than not, we’re guilty of expecting that little bit too much of athletes, seeing in the ease with which they drive a ball 320 yards or spend hours grinding a bike through mountain passes the hallmarks of some comic-book super humanity.

By this, I mean it’s not enough they routinize feats of neuron-melting coordination and stamina; we’re accustomed to demanding that little bit more. Super-tact, for example. Super-politeness. Super-standing-outside-the-practice-ground-in-the-rain-signing-baseball-caps-for-parents-who-will-probably-just-sell-them-on-Ebay.

That the bar is currently set impossibly high seems of little concern to anyone; we’re too busy setting our guys against the trophy-hoisting gentlemen of yore and finding them wanting. On the one hand, it’s a coding error that can be traced to our own slightly warped reading of the past; on the other, it’s a flaw we’re building into the athletes themselves.

Our vision of sporting history tends to be telescopic, more interested in perpetuating outsized myths than any living, breathing reality. After all, who wants Ben Hogan, the troubled obsessive-compulsive, when you can have The Hawk, his mythic alter ego? And having made that leap from a complex past to a simpler, more reassuring one, the present can only look poorer by comparison.

Especially when – and here events take a turn for the ironic – we insist our stars make ever greater personal sacrifices in the pursuit of so-called greatness.

Where was Bubba Watson while you were in getting your head dunked in high school toilets or imploding during job interviews – in short, ingraining all the sweet, sweet neuroses that define a 21st-century adult?

He was touring the elite amateur circuit as a shot-making, long-hitting savant, living a life illuminated solely by his own megawatt talent. That he should have emerged more adept at hooking a short-iron 30 yards through the air than crafting a tactful and compassionate response to unforeseen failure is hardly surprising.

To admit as much is hardly to excuse his behavior, merely underscore the extent to which we insist on making impossible demands of would-be heroes.

Hogan never had to endure the Orwellian tyranny of the digital age, where smartphones and cameras hover in a state of constant readiness; nor did he live his life as filtered through a protective barrier of agents, coaches and surrogate parents.

At best, our tendency towards myth-making is half the problem for the wide-eyed naifs we insist on calling role models. More fundamental is our insistence sports stars speak and act like more dignified versions of ourselves.

Ted Scott, the bag-toting unfortunate at whom Bubba leapt on Sunday evening, understands the nature of these contradictions better than most. Like his long-suffering colleague Bones Mackay, Scott is tasked with nudging and coaxing an impulsive prodigy around the world’s most challenging golf courses. If nothing else, it’s a role that offers an interesting vantage point from which to witness the capacity of pressure and small, nameless injustices to wreak havoc on the human mind.

His emergence in the hours after the incident to both counsel forgiveness and assume responsibility for that card-wrecking triple-bogey struck many as overly generous, even suspiciously so. We might be more prudent, however, to take it at face value, and in so doing, steer clear of well-worn hypocrisies.