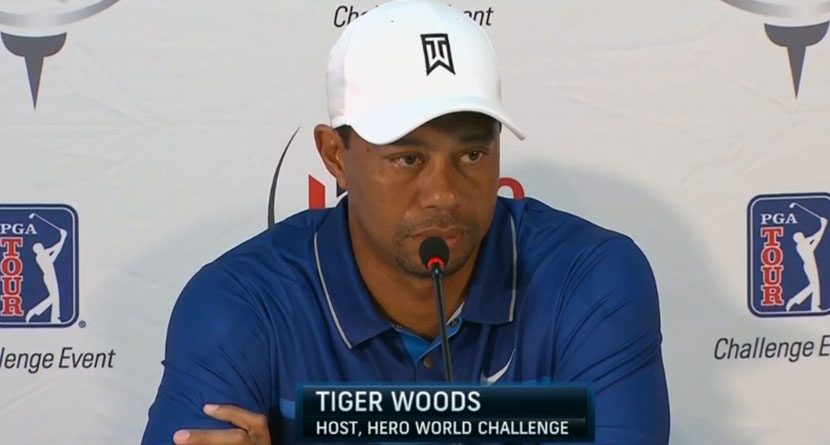 Success is addicting and when the process of getting better becomes similarly enticing, great things can happen; that’s how Tiger Woods built his legacy.

His talent, like his work ethic, were unmatched. He rose from bed at 5 a.m. to get to the range, the course, wherever, in an endless pursuit to perfect an imperfectable game. All the while, his body took the brunt of the force.

On Tuesday in the Bahamas, behind a desk alongside a CEO and rising star in the game, Woods talked about his second and third microdiscectomies in hushed tones, openly questioning whether the same body that took him to the highest heights in the game would allow him to tee it up again soon, if ever.

What Woods called a “mindset adjustment” did not appear to have taken hold as he answered questions from assembled media two days before his foundation-hosted event, the Hero World Challenge. Visibly beleaguered, Woods confirmed a few commonly held assumptions: he had three procedures on his back, all in the same spot; he hasn’t played golf in months, not even swinging a club since late September — that just a one-handed, left-handed chip; he hasn’t begun any rehab yet, walking is the extent of his physical exertion; and there was no definitive timetable for when he could expect to return to competitive golf.

It was a lot to digest, but not necessarily anything too revealing. Yet, the tone and body language that accompanied Woods’ lack of definitive information gave a glimpse into the psyche of a man who had allowed doubt to creep in. Through the roller coaster that has been the last six years for Woods, his steely resolve and almost comedic routine of pronouncing unrealistic expectations were ironclad. Wherever he showed up, he expected to win. Never mind if it was his first tournament since a life-altering scandal, or his first event since a knee surgery, or his first start with yet another reinvented swing, Woods expected to win. Whether he truly believed what he was saying or not, he gave the impression that he did.

That impression was gone on Tuesday. And while the doubt and uncertainty must be disconcerting for Woods, it’s hardly unusual and shouldn’t be construed as a preamble to retirement. Gone are the days of 2000 Tiger, of 2005 Tiger and maybe even of 2013 Tiger, but the one thing that each of those versions have in common is that they don’t have much in common at all. Woods has reinvented himself and his game repeatedly, perhaps to his detriment and more than likely, to the detriment of his body.

Now, the only question that remains is whether or not the body that allowed himself to be reinvented is up for another reboot. He’s aging — about to turn 40 years old at the end of the month — and slower rehabilitations at older ages is natural. But Woods’ isn’t a patient patient.

We saw that at Albany: an impatient performer sidelined by a body that is not cooperating. It’s frustrating; likely much more so for Woods than the people who yearn to see him play again. For once, he was caught with his guard down. He showed some insecurities, some uncertainties and revealed the doubts that will continue to build with each passing day.

What we will see over the next weeks, months and years will be interesting. Can Woods’ body bounce back? Will he give it the time it needs to do so? And if those two things can happen, what does his golf game have left in the tank? The answers to those questions were basically the thesis of Woods’ press conference…