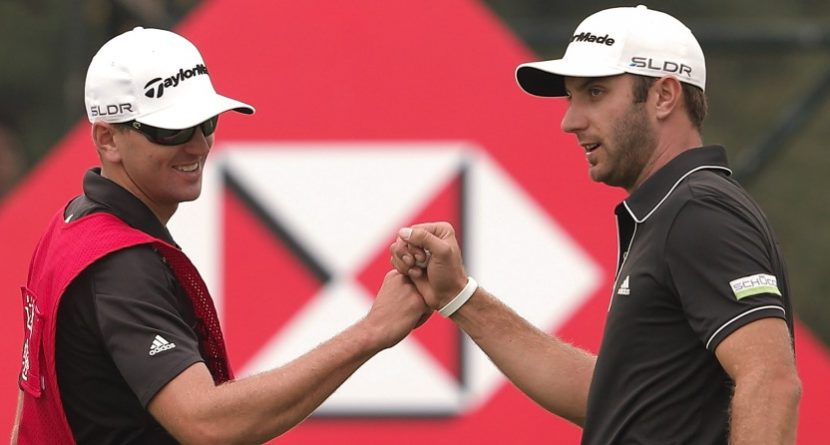 The caddie-golfer relationship is a tricky one. The golfer needs to trust his sidekick’s info. The caddie needs to know what to say, how much to say, and when to say it. That level of understanding takes time.

Dustin Johnson will soon lean on a caddie with whom he’s had a relationship nearly his entire life: his younger brother. Austin was on the bag for Dustin back in November at the World Golf Championships-HSBC Champions event in Shanghai. Dustin won, beating a pretty strong field, so it now looks as if this caddie-brother thing will be full time.

If that’s the basis for picking a new caddie, Sergio Garcia may now have a new looper as well. He just won this past weekend at the Thailand Golf Championship with his girlfriend, Katharina Boehm, by his side. It’s not like real relationships haven’t spilled onto the golf course before. One of the better moments of 2013 was when 24-year-old Patrick Reed collected his first career PGA Tour win and immediately hugged his wife, Justine, who serves as his caddie. They were the first husband-wife tandem in 17 years to claim a PGA Tour event.

That pairing is permanent until something forces the couple to spend more time apart, but the Reeds aren’t the first husband-wife combo in golf. Legendary LPGA star Nancy Lopez sometimes got her husband to loop. He seemingly had a much easier time carrying the bag than Justine – Lopez’s husband was former major league baseball player Ray Knight. Guest appearances by family members on the bag are a bit more common. The most memorable, of course, comes from the 1986 Masters, when Jack Nicklaus had his son, Jack Jr., as his caddie. The 46-year-old Senior rallied from five shots back in the final round to become the oldest player to win the Masters. It was Nicklaus’ 18th and final major championship of his storied career. Another Junior was on the bag at this past Masters, and was nearly another victorious caddie. Angel Cabrera Jr. carried for his father, who, at 43 years old, almost captured his second green jacket. Angel Cabrera Sr. fell to Adam Scott in a playoff.