Dustin Johnson Looking Forward to Getting Home to Paulina Gretzky 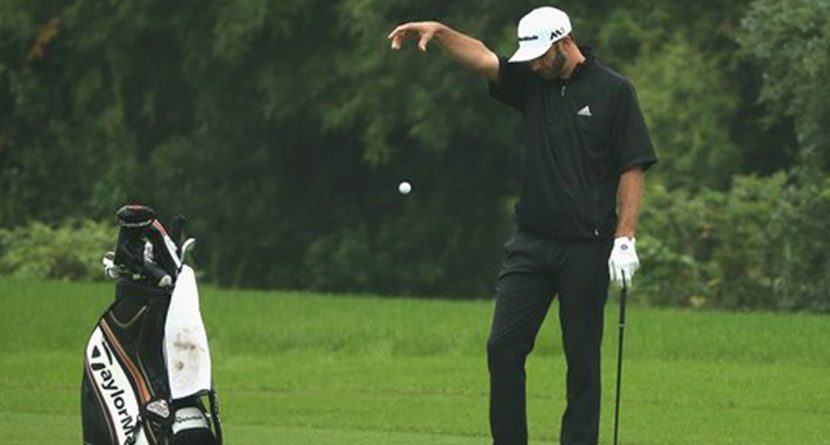 Dustin Johnson had another near-miss at the WGC-HSBC Champions in Shanghai this past weekend. Coming into the final round one shot behind co-leaders Kevin Kisner and Russell Knox, DJ posted two early birdies in an effort to win his third World Golf Championship trophy.

But on the 8th hole, Johnson caught a break that perfectly sums up his 2015. With only a wedge left into the par-5, DJ went pin-seeking, flighting down an approach that looked for all the world to be a tap-in birdie, which would have moved him to 18-under par with 10 holes remaining. Instead, Johnson’s ball struck the fiberglass flagstick squarely, jettisoning the ball off the green, down an embankment and into the hazard.

This is the unluckiest break of the week. Golf is hard. #QuickHits https://t.co/sw4cygJyCi

DJ would go on to make a double-bogey 7, moving him from what would have been a tie for the lead back into the pack. Undoubtedly, watching her husband’s hard luck from some 6,500 miles away in California, Johnson’s wife, Paulina Gretzky, took to Instagram to ease the 9-time PGA Tour winner’s pain.

After finishing up his round — a 1-under par 71 — DJ popped on to Instagram, saw the pick-me-up sent from Paulina and shot her back his regards.

Dusty has no chill. pic.twitter.com/BGrW8CRd6t

Apparently, texting doesn’t get the job done anymore. Luckily for both parties, DJ will have a few weeks at home before teeing it up in next month’s Hero World Challenge.