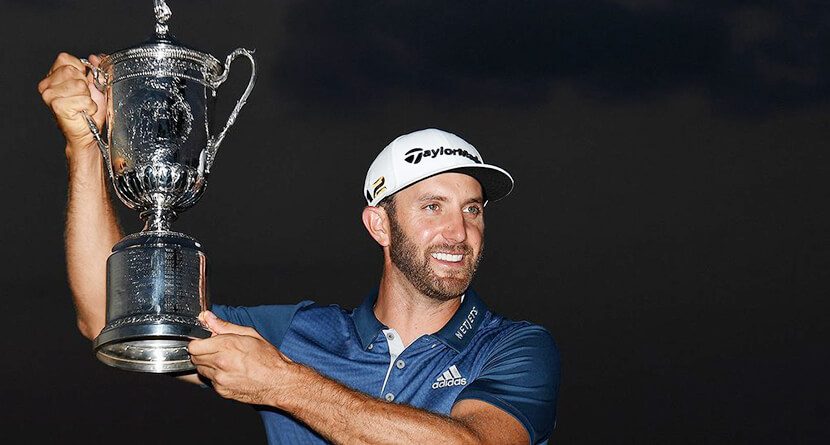 Dustin Johnson’s first major championship was never going to come without some drama. For a guy who has been so close so many times, it just didn’t seem to be in the cards for DJ to raise one of golf’s four biggest trophies without some shred of controversey.

Of course, we didn’t expect DJ to need to overcome his four-shot deficit at the beginning of the final round and a bungled rules enforcement to win the 2016 U.S. Open, but that’s exactly what he did.

Facing a five-foot par putt on the 5th green, Johnson went through his routine making short practice stokes near the ball when this happened.

Close up look at Dustin Johnson’s golf ball moving, he may be penalized a stroke after the round https://t.co/MouadHgDpa

Johnson was two shots back of 54-hole leader Shane Lowry at the time. He called over a rules official who granted him reprieve because Johnson felt he didn’t cause the ball to move. Having had a few other instances of balls moving on the slick Oakmont greens already this week, the issue seemed to be done and dusted until seven holes later when Johnson was told on the 12th hole that he may be assessed a penalty for causing the ball to move.

Johnson said knowing that he didn’t cause it to move, he wasn’t bothered by the USGA’s message that they would be looking further into the matter following the round. And this all happened while DJ was neck-and-neck with the likes of Lowry, Scott Piercy and Sergio Garcia coming down the stretch at the U.S. Open.

Thankfully for the USGA, the contenders around Johnson crumbled while DJ thrived in the spotlight. He finished his round at 5-under par and four strokes clear of his nearest competitor. Johnson ended up accepting the penalty. In the end it was a moot point. Johnson’s margin of victory shrunk from four strokes to three, but the U.S. Open trophy was his.

Here are the full final-round highlights. You can watch an extended version at Golf Channel.