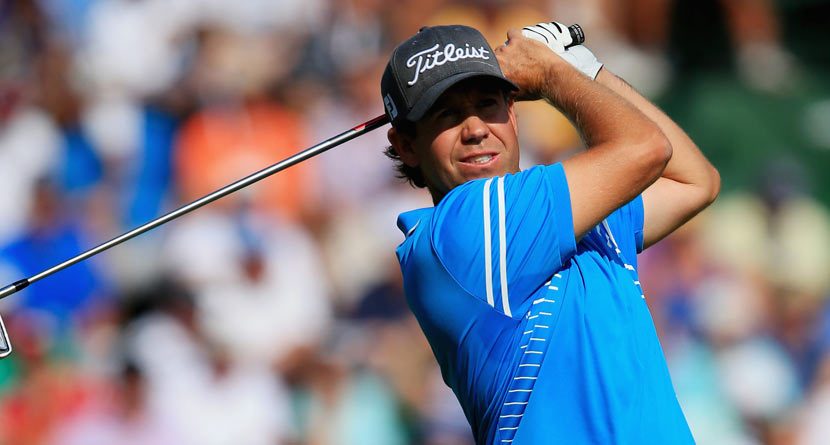 The 2014 U.S. Open will always be remembered for the astonishing domination of Martin Kaymer as he strolled to his second major title in a manner reminiscent of Tiger Woods.

But it will also be remembered for the man who finished second — a golfer for whom even starting a major is an achievement close to a miracle. That man is Erik Compton, the underdog for whom everybody other than Kaymer’s family was rooting.

At age 34, there would appear to be nothing remarkable about Compton until you listen to his story. As you fight back the tears, you will be left in awe of this man. All of us wander through life complaining about aches and pains, but once you know what Compton has been through, you will never again curse your luck. If you do, you should be ashamed of yourself.

He looks like any other golfer, but it was his words in the immediate aftermath of his second-place finish that revealed he is anything but: “I now hope that I will be known as a golfer who finished in contention at the U.S. Open, rather than as the heart transplant patient who plays golf.”

Compton has had not one but two new hearts. He received his first transplant when he was just 12 years old and a second in 2008, when he phoned his mother to say goodbye, so convinced that he was going to die. He suffers from a rare condition where the organ inflames beyond the point where it can operate properly.

His recollections of the first operations are vivid.

“As a kid I was conscious they were going to open my chest and I was on my way to Jackson Memorial hospital with my dad,” he said. “That was the start of it all really. The things that happened in 1992 were the beginning of it all and it was almost a case of becoming a man at 12 years old.

“When somebody tells you they are going to take your heart out and put a new one in, the long-term prognosis wasn’t very good. They said four to five years and then they would revisit it again.”

“When I was in Jackson,” Compton recalls, “I could hear the helicopter land [carrying the replacement heart]. I think it was hard as a kid because any kind of surgery as a 12-year-old, you are freaking out. The idea of having open heart surgery was more scary than the life-threatening deal of it.”

Six years ago, he had to go through the entire ordeal again, and this time it was far worse. “I had just missed a cut and was fed up and wanted to come home and fish,” he said. “I came home, took the canoe out and I could feel I had some pain in my back. The next day I took my bike out and I had two flat tires so I walked it all the way back about 10 miles. Then I went back to the golf course and thought, ‘Something is not right.’ I remember leaning over and I then drove myself to the hospital.

“That is when I started coughing up blood right there at the front of the hospital room. I grabbed somebody and said, ‘I am going to die here, you need to get me in.’ They carried me into the emergency room and that is when the doctors thought I didn’t have much of a chance. I ended up getting out of there.”

Not, however, without serious short-term pain.

“I knew it was my last resort,” Compton said. “I was prepared if I was going to die on the table. I thought, ‘Hey, I am going to be gone anyway, I just won’t know the difference.’

“I was tired of sitting in a chair and not being able to breathe at night. It sucks, I was an old man at 28. I couldn’t breathe. I was coughing up blood from the heart not working. I was like, ‘Get me out of here.’ I was excited when they gave me the call. When I woke up from the surgery I thought, ‘What did I put myself through?’ I had 17 test tubes in my body.”

In 2010, Compton competed in his first major. The U.S. Open at Pinehurst was his second and he finished as runner-up to Kaymer. This week he’ll enjoy his first trip to The Open.

It is the stuff of fairy tales. Well, not quite. Compton admits that he still gets tired, especially towards the end of 72-hole tournaments. He also has to take a lot of medication to ensure that his body does not reject his heart. And he is more aware of his mortality than any other golfer competing on tour.

When asked how long he expects to live, he replies, “It is a tough question. I don’t really care right now. I am in the now right now. Whether I have 15 minutes to make it to the hospital or not, I am not going to sit here and dwell how much time I have left. Nobody knows. It is easier going through life not knowing. You have to enjoy your life.”

He has a special exemption that allows him to use a golf cart in professional events, but he refuses to even consider the prospect. “I don’t want anyone to think I have an advantage on them,” he said.

So far this season, Compton has made more than $1.5 million and is in the form of his life. That is precisely how he wants to be regarded. If he should triumph in The Open, there will not be a dry eye in the house for what would surely be the greatest sporting story ever told.

Don’t bet against it happening.