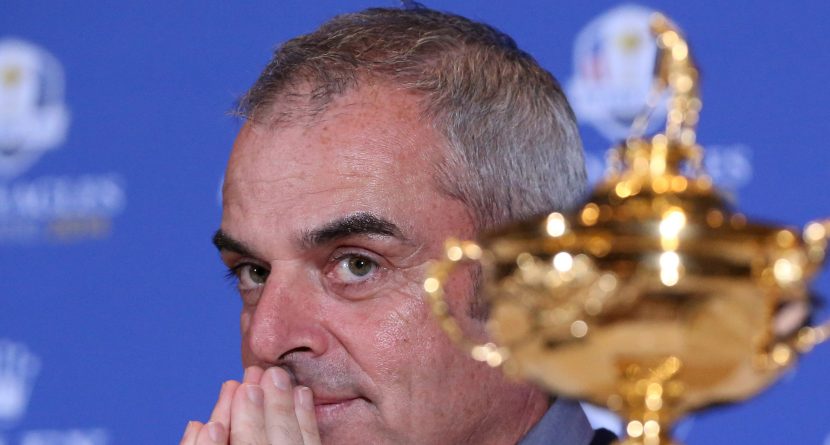 The interior of the St.Regis Hotel in Abu Dhabi, in a small corner of which two dozen eager golf journalists spent Tuesday evening coralled in a state of mounting agitation, speaks the international language of conference rooms and corporate retreats. It’s quietly, blandly opulent; a riot of beige and brown.

The interesting stuff is all on the outside, where the facade, a tiered mass of whitewashed columns, marble and tiled rooves, calls to mind the architecture and scale of imperial Rome. As a venue for boardroom intrigue and political shicanery, the Emirates can boast of few more fitting venues.

Such an observation would likely have gained little purchase with the small group of players and officials on hand to convene Tuesday’s meeting of the European Tour’s Tournament Committee, but theirs was a drama tailor-made for high-falutin’ analogy. They’d gathered, after all, to accomplish the messy business of selecting a new Ryder Cup captain, bringing to an end weeks of speculation, off-the-record wrangling and frenzied multimedia canvassing.

No longer the stuff of cheery soundbites and polite asides, the campaign had grown increasingly acrimonious, becoming the subject of strained public pronouncements and unseemly, conspiratorial tweeting.

Paul McGinley, long the populist frontrunner, successfully weathered the challenge of Darren Clarke, only to see that of Colin Montgomerie – the Caesar recently returned from punditry exile – gain credence as a “statement” candidate to rival the United States’ choice, Tom Watson.

Hours later, Tournament Committee chair Thomas Bjorn would hail McGinley’s selection as “unanimous,” putting a pleasant sheen on what had threatened to become a public relations debacle. The names of three other potential candidates – Miguel Angel Jimenez, Paul Lawrie and Sandy Lyle – were retrospectively added to the mix, but consensus opinion, quietly shaped by those with insider knowledge and an agenda push, had the election a two-horse race before the electoral circus even arrived in the Middle East.

On one side stood McGinley, an articulate and dignified omnipresence at the Ryder Cup and Seve Trophy for the better part of a decade. With him went the hopes of the public and a powerful coterie of British and Irish players, including Rory McIlroy, Graeme McDowell, Padraig Harrington, Ian Poulter, Luke Donald and Justin Rose, each of whom had agitated on his behalf.

On the other, Monty” a hulking, caricature-proportioned personality and Europe’s most prolific talent for the better part of the decade following the 1993 Ryder Cup. The Tour’s elites, for whom McGinley always looked a competitive lightweight and last resort, had begun to regard a second Montgomerie captaincy, in his native Scotland no less, as the perfect riposte to Watson’s selection.

In the end, the support of the players, McIlroy in particular, carried the day. They were aided, of course, by logic and common sense, both of which could volunteer a handful of arguments in the Dubliner’s favour and only one or two caveat-laden shrugs in that of his chief rival.

Aside from the very fact of McGinley’s popularity among the players likely to form the core of his team – persuasive in and of itself – the dignity and shrewdness with which he managed his campaign ensured he entered the home straight an awkward target for personal attacks. Unlike, say, Darren Clarke, whose abortive bid for the captaincy was marred in its final days by injudicious propagandising, McGinley elected repeatedly to stick rather than twist.

A brave and, ultimately, reassuring course of (in)action for an aspiring captain to take – it’s suggestive on some fundamental level of the right stuff – such restraint would prove decisive.

While Montgomerie found his path blocked by numerous, hard-edged obstacles – the simmering embarrassment of his chummy, excruciatingly self-conscious commentary on Sky Sports; the resentment of players and fans who believed he’d no right to re-enter a race he’d long since disowned, let alone with such presumption  – McGinley was running only against the soft breeze of apathy.

It was a bloodless coup in the end, what little violence there was obscured behind closed doors and platitudes. By the time McGinley took to the lectern, beaming from one ear to the other and leaping headlong into effusive answers, Monty had already left the building.

It can be a ruthless business, this ruling of empire.