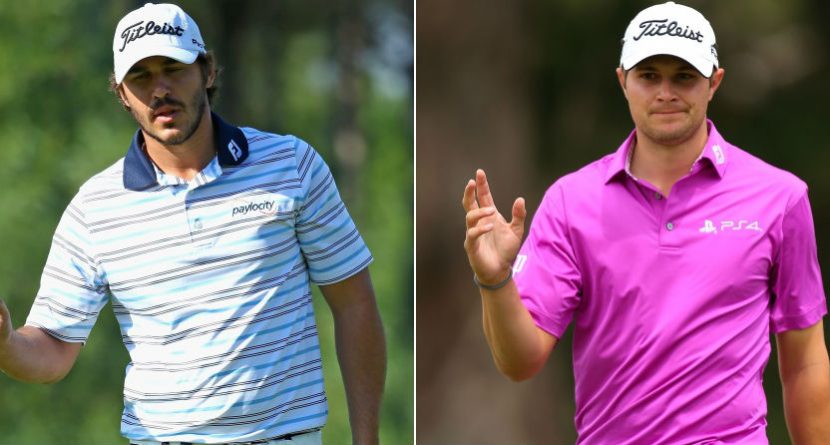 Have you heard the one about the two American housemates who decided to head off to Europe in search of fame and fortune?

At the end of 2012, Peter Uihlien and Brooks Koepka packed their bags and crossed the Atlantic Ocean, having decided that they wanted to play in Europe. Many people shook their heads, convinced that the youngsters were making a mistake. That number did not include anybody who knew them and knew what they were capable of achieving.

The easy option would have been for the young guns to have remained Stateside. Uihlein’s father, Wally, is the head honcho with Titleist in America, and could surely have nudged open a few doors for his boy. But Uihlein wanted to stand on his own two feet, even if that meant entering an entirely alien environment.

Uihlein and Koepka have known each other since junior golf. When they arrived in 2012, both failed to make it through qualifying school in Europe – ”Struggled at the wrong time,” Koepka said – and thought the best way to improve was playing a steady diet of tournaments on the Challenge Tour instead of trying to Monday qualify on the Web.com Tour in America or get lucky with a sponsor exemption.

“I think guys get caught up trying to do Monday qualifiers, and there’s a lot of disappointment,” Koepka said. ”You can shoot 66 and go home, and you don’t build on the rounds. Anybody can have four good days. I thought my best option was to come over here. I think it has made me a more well-rounded player. I don’t think Europe is for everyone. But it’s worked well for me.”

You could say that. After four wins on the European Challenge Tour, Koepka’s big breakthrough came this past Sunday when he won the Turkish Airlines Open by a shot over Ian Poulter. It earned him about $1 million and a bucketful of world ranking points. Koepka is now in the top 50 in the world rankings (No. 35) and will play in all four majors next year, as well as have entry to the World Golf Championship events.

Uihlein’s year, meanwhile, has been marred by a back injury that forced him out of the BMW PGA Championship, and also led to his withdrawal from the Scottish Open and a miserable performance at the Open Championship, when he failed to make the cut.

Thankfully, he is almost fully fit once more, and finished ninth at the Perth International in October (his first top-10 of the year) and tied for 11th in Turkey.

So it’s been tough for Uihlein, who was named the European Tour’s 2013 Rookie of the Year. Formerly the world’s top-ranked amateur, Uihlein gained an immediate promotion to the main tour (along with full playing rights until the end of 2015) when he won the Madeira Islands Open in 2013. It was the catalyst for a superb run of form that included eight top-10 finishes. He finished 14th in the Race to Dubai last year.

And Uihlein can be credited with keeping Koepka by his side. During the Scottish Hydro Challenge last year, Koepka was ready to pack up his golf clubs and head back to the U.S. Uihlein persuaded him to stay. Koepka responded by winning the tournament.

He was tired of living out of suitcases, not knowing what he was ordering for dinner because of language barriers. He wanted to go home to West Palm Beach, Fla., where he shares a house with Uihlein.

Uihlein knew what his friend was going through and talked him around. “I told him I was done with golf, even with as good as I was playing. I needed a break,” Koepka said. “His words were refreshing to hear.”

Koepka admits that he has learned a great deal during the past couple of years, especially when it comes to dealing with bad weather.

“Americans can struggle (with bad weather),” Koepka said. “There is wind and rain and lightning (in the U.S.), and lightning will take you off the course. Over in Europe, there is no lightning, so you are playing through it all. I hated playing in a rain jacket (before), but you get used to it. I am more of a complete player.

“I look forward to teeing it up (against the best), there is no nervousness at all,” he said. “I enjoy it. It’s where I want to be right now.”

One of the house rules in Florida is that whoever wins a tournament has to buy a jet ski. ”We’re going to have a whole fleet,” Koepka said.

That means one is coming after his victory in Turkey. And he may get plenty of time to ride it next year, as Koepka has his PGA Tour card for 2014-15. He obtained it after finishing fourth at the U.S. Open, and further proved he was worthy after placing 15th at the PGA Championship. In two PGA Tour events this fall, Koepka earned two top-10 results.

Then came the win in Turkey.

“It was a special week,” Koepka said. “I feel like I’ve been playing really well. I’ve been knocking on the door, and these last maybe two, three months, I’ve been very close over here and in the States. I felt like I should have won a couple.

“But I’ve been knocking on the door and I’ve learned something every time, and used that (Sunday). I was very relaxed, very calm today, and it showed I guess.

“To look where I was a year and a half ago on the Challenge Tour and now to be a winner on the European Tour is incredible, especially winning four times there and winning out here, it’s very special. So I’m excited to get to next week and hopefully carry my form over.”

Uihlein is 25, Koepka, 24. Fans back in the USA may have missed out on much of what they have achieved to date, but that will soon change. For America, the future looks pretty good, with these young dudes about to join the likes of Jordan Spieth, Rickie Fowler and Patrick Reed as the backbone of the next American Ryder Cup team. Just imagine: Europe could pay the price for helping two of Uncle Sam’s brightest prospects to develop their talent.

What a delicious irony that would be.