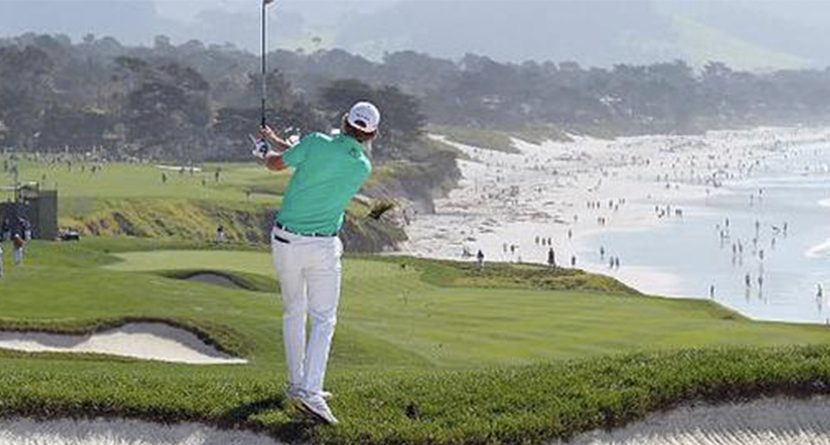 The AT&T marks the final tournament of the year that features rounds on multiple golf courses, which for gamers, can be a good and bad thing. Good in the sense that handicapping the field on one course is easier, but bad in that your less interested competitors will not sink themselves by starting guys playing on the toughest course in the rotation.

Speaking of the courses, the 156 pros and their amateur partners will be playing in foursomes going off of split tees and will play three rounds guaranteed: one at Pebble Beach, the tournament’s home course, one at Monterey Peninsula Country Club’s Shore Course and one at Spyglass Hill Golf Course. If you read no further, remember this: you want guys in your lineup playing Monterey or Pebble. Avoid Spyglass at all costs.

Course rotation for the @attproam:

As Bolton describes in his Power Rankings, either MPCC or Pebble have had the lowest scoring average in relation to par over the past five years depending on the year. Spyglass never has.

Brandt Snedeker is your defending champion at the event. He routinely plays with Toby Wilt, a businessman and mentor of Snedeker’s going back to his days at Vanderbilt. You’ll see a lot of Snedeker in Yahoo! and DraftKings lineups given his tournament history and his current form, which includes two wins here in the past three years and a win and two other top-3s in his last three events. Stout.

Snedeker will have to maneuver a strong field that includes world No. 1 Jordan Spieth, No. 3 Jason Day, and Nos. 6-9: Bubba Watson, Justin Rose, Dustin Johnson and Patrick Reed.

Steve Bamford from Golf Betting System likes the value on guys such as Mickelson, Holmes and the defending champ, Snedeker.

There’s a lot to be said for the guys at the top of all the prediction sites this week. After all, it’s hard to discount the best players in the world. However, it’s important to buoy those expectations against the guys’ personalities. Guys who don’t really deal well with outside distractions (cough Bubba cough) could easily be thrown off their game by the ridiculously long rounds, the pro-am format for three (and possibly four) days and the celebophiles who will inevitably be lining the ropes to catch a glimpse of Josh Duhamel or Justin Timberlake.

Look to guys such as Phil, Jerry Kelly, DA Points and the like who have reputations for genuinely enjoying this type of thing to excel. A sleeper this week in that department for me is Patrick Reed. Reed has a pretty harsh reputation, but one takeaway I took from Slaying the Tiger was that he’s always been exceptionally good in these formats, playing with people older than he is, so I expect a big week from Reed.

Additionally, all three courses play under 7,000 yards, which could suit whoever you want your stats to say it suits. I prefer bombers who putt well on poa annua. DJ and JB Holmes check those boxes as does Phil, Jason Day and Jimmy Walker. I like them a lot.

Phil Mickelson. A course and tournament that Lefty loves, I’m taking the flyer on Phil this week. I wanted to use him last week and faded him late because I thought Bubba was the better play. Then Bubba came out and bashed the course and it was Regretsville, population me. Not this time. Lefty. Ride or die. He’s a world class schmoozer and a first ballot PGA Tour Pro-Am Hall of Famer.