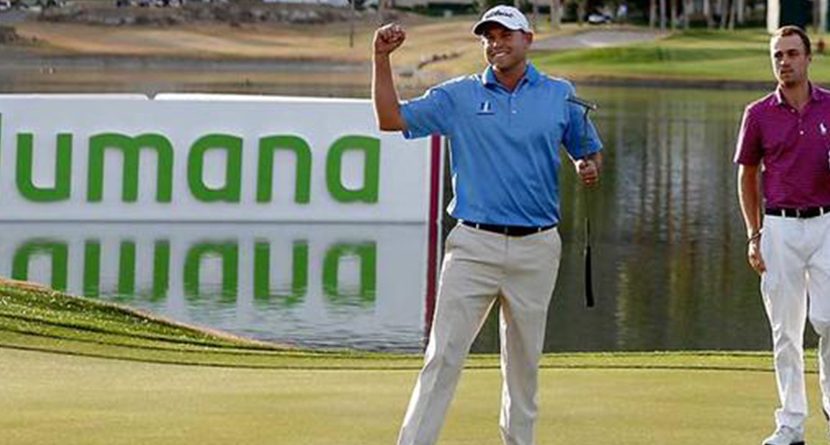 The PGA Tour heads back to the mainland for the beginning of a six-month stay that ends with the Open Championship in Scotland. The first stop on that extended stay is La Quinta, Calif. and the CareerBuilder Challenge in partnership with the Clinton Foundation (rolls right off the tongue). The event is played across three different courses — two of which are new this year — in a preview of what the PGA Tour will look like in 2116 when the game is played in weather-controlled domes.

Bill Haas is the defending champion and a two-time winner of the event in the desert, previously — and still often referred to as — the Bob Hope Classic. Last year, Haas got to 22-under par, depriving the world of a six-man playoff. Despite the tournament moving to a few new venues this year, recent course and tournament form in the event should still hold true.

Things you need to know about these courses are that the Stadium Course, which will host two rounds, is the hardest in the rota. It’s so difficult, in fact, that the last time the tournament was played on it in 1987, the pros asked the Tour to stop using the track because it was so tough.

La Quinta was the most difficult in terms of stroke average among the three courses used last year, so ranking difficulty for head-to-head betting and Yahoo! gaming should go as follows: avoid guys on the Stadium Course or bet against them in H2H vs. guys playing one of the other two courses, wait and see after day one which of the other two courses will give you the best chance to cash in on players and even if you’re hesitant about La Quinta, know that it was still the fifth easiest course on Tour last year, playing 1.917 strokes under par.

Stats worth considering this week include driving accuracy (a tip per Darrin Harn, the Director of Golf at PGA West on the Tour Junkies podcast), scrambling (a byproduct of the tough-to-hit fairways), birdie average and bermuda grass putters.

(Guys who should definitely be in your cash games or Yahoo! lineups)

Patrick Reed: The hottest player in the world currently not named Jordan. Reed has top-10’d in his last seven worldwide starts and ranks highly in a bunch of the stat categories were looking at this week including top-30 in both scrambling and birdie average. Won this event in 2014.

Bill Haas: Something about the desert brings out the best in Haas. Finished in the top-6 in four of his last six appearances including two wins. A fairly straight driver of the ball and a really good scrambler.

(Guys who have upside, but are not necessarily likely to be highly owned (GPP))

Billy Horschel: Making his debut with his new PXG irons, so a bit of an unknown there combined to a long offseason of out-of-sight out-of-mind. However, ticks a few of the boxes we’re looking at this week — hits 64% of his fairways, makes a lot of birdies — while getting good value in both odds and DFS.

Robert Streb: Another guy making his 2016 debut, Strebber had nine top-10 finishes last year and can flat out fill it up. Ranked 19th on Tour making 3.95 birdies per round last year. Another good value guy for cash and GPP.

Jason Dufner: Can hit the ball straighter than you can point with any club in the bag, except for maybe his putter. Looks to be up for a big year coming off of a T9 at the RSM, a win in the team-event Franklin Templeton Shootout and showed some good wraparound form coming in T9 again last week at Sony.

William McGirt: A stat sheet stuffer this week. Dirt hits just under 68% of his fairways and is 11th in scrambling. Everything else hovers above average on Tour and has some good form coming in with a T2 at the Sanderson Farms and a T13 last week at Waialae.

Others I like: Tony Finau, Francesco Molinari, Daniel Summerhays

(Guys who you can count on to play four rounds, but need a special week to win)

Ryan Palmer: A top-10 machine here, notching his worst finish here — a T10 last year — in his last three starts. Hasn’t won it, but has been close. Not super accurate off the tee and not a strong putter, but is the fourth-best bermuda grass putter on Tour over the last two seasons, saving nearly 2 more shots per round on bermuda as opposed to other strains.

Matt Kuchar: Another piece of that five-way runner-up in 2015. Good tournament history, having not finished outside of the top-25 in his last six starts in the desert and putts well on bermuda — third-best on Tour.

Zach Johnson: The venue change seems to play right into ZJ’s hands. Top-10 in driving accuracy and a top-25 guy in birdie average. Playing himself into some form over the first few weeks of the year, notching a meh T21 at the Hyundai, but followed that up with a solid top-10 last week.

Others I like: Webb Simpson, Phil Mickelson, Jason Bohn

(Guys a little deeper down the way, good value plays to round out your lineups or take a flier on)

David Lingmerth: May be an overstatement, Lingmerth is the poor man’s Jordan Spieth. Whereas Spieth has been Menafee’d into the misnomer that he’s not great at anything, he’s good at everything, this actually describes Lingmerth. (Sidenote: Spieth’s great at everything and exceptional at putting, for the record.) A little steep on DraftKings, but a solid play nonetheless.

Brendan Steele: Realizing I’m a little heavy on that second-place group from last year as I write up the third member of that fivesome (where’s Sung Joon Park and Steve Wheatcroft?), but Steele has a T17 and a T3 to his credit in the wraparound, is a fairly straight hitter and a birdie machine.

Patrick Reed. Look, there’s no reason to overthink this one. He’s the odds-on favorite in a relatively weak field and he’s playing the best golf of anyone on this continent (don’t forget to tune it to Abu Dhabi this week for Spieth, McIlroy and Fowler). It’s a Ryder Cup year, which while still early, is basically the reason Reed walks the Earth. There are 40 tournaments this season, give or take, that you need to make a decision on. Get out to a lead early in the year and make those behind you force a big play when it’s not primed to happen. PReed is primed and ready to win again. This is the week.

Others I like: Ryan Palmer, Matt Kuchar, Zach Johnson