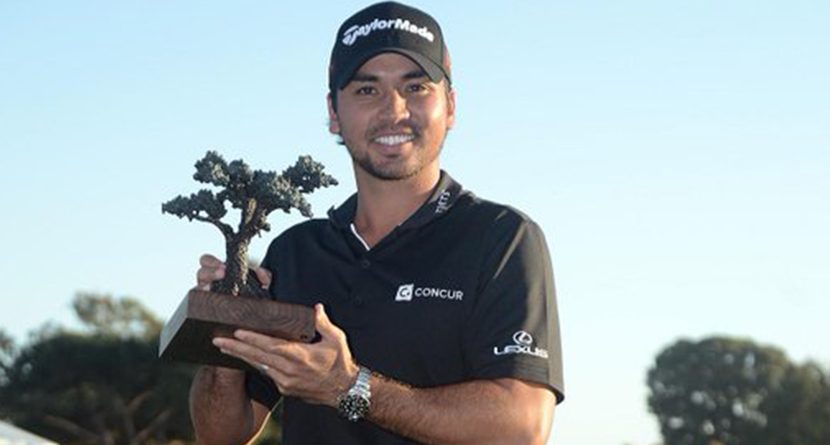 The West Coast Swing kicks into high gear this week as the Tour moves from the weather-controlled PGA West to the shores of the Pacific Ocean at Torrey Pines for the Farmers Insurance Open. Torrey is most well-known for being Tiger Woods’ playground, a place he’s won at seven times, most famously in 2008 at the U.S. Open.

Jason Day makes his mainland debut and his first title defense of 2016. The Aussie won his first of five tournaments at Torrey last year, outlasting Harris English, JB Holmes and Scott Stallings in a playoff. A good Tour pedigree around Torrey is necessary for a winner, if past champions are any indication. Every winner at the Farmers since 2000 has had at least one other win to his name. It also doesn’t hurt to have played the courses a few times.

The Farmers is played on both the North and the South Courses at Torrey Pines, which couldn’t be more different. The easier, shorter North Course will be frequented just once by the 150-man field and the much more difficult South will host one of the two opening rounds and both weekend rounds. The South is a beast. It plays as the longest course on Tour at 7,698, some 700 yards longer than the North course. And while more distance isn’t always an indicator of a tougher course, this week it is. The South was the sixth hardest course on Tour last year and the North was seventh easiest.

Your eventual winners here are all going to make their hay on the cake walk that is the North Course, so the statistical analysis this week lends itself a deeper dive on the much more difficult South Course. Driving distance is huge this week, keep an eye on it. There are six par-4s over 450 yards, so Par-4 Efficiency 450-500 yards will be critical. They’re putting on poa annua, so good bumpy putters is a good stat to look at. And finally, I’m looking at rough proximity because as much as length is a factor here, accuracy doesn’t always have to be.

(Guys who should definitely be in your cash games or Yahoo! lineups)

Dustin Johnson: DJ is the go-to bomber on the PGA Tour and he dominates poa annua greens. He’s second since 2013-14 in strokes gained: putting on the bumpy surface and if we had any indication that bad bounces rattle him, you didn’t pay attention at Chambers Bay last year (last hole notwithstanding).

Jason Day: Don’t let Day’s lack of play over the offseason scare you. He was third in driving distance last year behind DJ and Bubba, plus he’s the best poa annua putter on Tour. Long par-4 scoring? Fourth. Rough proximity? 18th. The total of his stat rankings in the four categories we’re looking at this week will likely be less than one category for most of the other contenders. (His numbers add up to a total of 26. 3-1-4-18.)

*Update: Day withdrew from the Wednesday pro-am due to illness. Keep an eye on the World No. 2 heading into play on Thursday and play at your own risk.*

(Guys who have upside, but are not necessarily likely to be highly owned (GPP))

Tony Finau: A pretty good value here on Finau in DFS and he’s due for a big week. Form coming into this event has proven not to be necessary, but length and par-4 efficiency 450-500 scoring are two of the big man’s strengths. Been kind of a hot pick in DFS lately, but a T64 followed by an MC hopefully will bring his ownership percentage down.

Phil Mickelson: People don’t want to trust Phil. He’s going on and on about face awareness and his new swing on plane. Whatever. If he thinks things are trending in the right direction, he’ll believe it himself. I think he sneaks in an early-season win. Waste Management, maybe. Anyway, he can still pump it out there off of the tee, he’s a San Diego guy, so he knows poa annua and he’s Phil.

Jamie Lovemark: Maybe a bit of recency bias creeping in, but Lovemark has been on fire to start the season and he’s coming to arguably the best set up for him to date. He hits it over 310 on average, he’s ninth in par-4 450-500 efficiency this year and he’s coming off of three straight top-10s dating back to the RSM. Still a new face to many.

(Guys who you can count on to play four rounds, but need a special week to win)

Brandt Snedeker: The only anecdote to not being a bomber around Torrey is being unconscious on the greens. Sneds has five top-10 finishes here in his last nine appearances, including a win in 2012. And Snedeker is averaging 298.2 yards off the tee this season. That’s a pleasant surprise. Bumpy greens don’t bother Snedeker.

Jimmy Walker: Jimmy Walker makes international team rosters in the first three months of the season. Period. He hits it far, he scores well on long par-4s and he’s going to show up over the next month in order to put himself in the conversation for the Ryder Cup team. I don’t love starting him here in Yahoo!, but he’s a good bench warmer, just in case.

Patrick Reed: I want to quit you, PReed, but I can’t. After a disappointing week on a (trio of) course(s) that set up much better for him, look for Reed to contend this week. He’s fairly long — over 290 — and he plays tough courses well.

Justin Rose: Could Justin Rose be a sleeper this week? He’s top-10 in the world, but he’s too old to be in the young gun conversation despite being one of the best pure strikers of the ball on the planet. Think he’ll be criminally under-owned in DFS because of his price, but the particulars back it up. Start him this weekend.

Others I like: Charles Howell III, Hideki Matsuyama, Rickie Fowler

(Guys a little deeper down the way, good value plays to round out your lineups or take a flier on)

Patton Kizzire: Moderately priced in that $7,000-$8,000 range, but not the name that jumps out at you in that group, although he should. The rookie can roll the rock (top-20 SG: putting), pump it out there 295 and make a lot of birdies.

Shawn Stefani: A longer-than-you-give-him-credit-for hitter, solid ball striker and a reasonably-priced option to fill in a spot for relatively cheap. Give him a look.

Others I like: Pat Perez, George McNeill, Jim Herman

Jamie Lovemark: Let’s ride the hot hand. Lovemark has played courses that don’t suit him as well as Torrey in top-10 fashion so far this year. A bomber who can roll it a little bit and would love to come out and make a statement. Little nervous about this, but don’t want to burn a huge name sight unseen.

One and Done, Year to Date