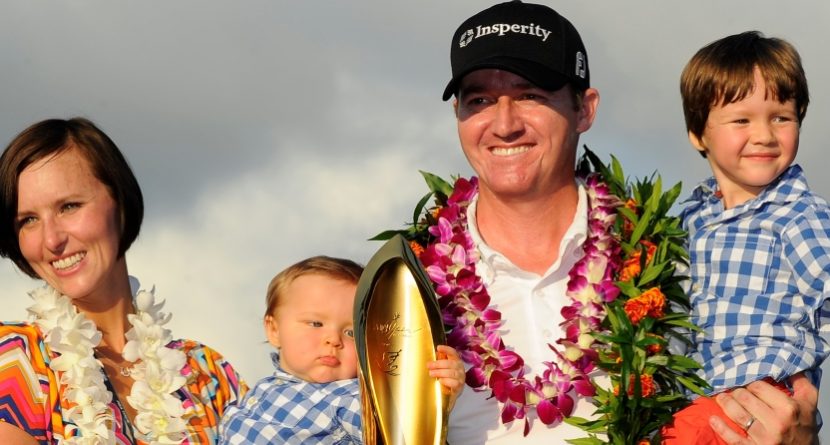 The PGA Tour island hops from Maui to Oahu this week and the Hawaiian capital city of Honolulu for the first full-field event of 2016. With the unofficial start to the golf season coming last week at the Hyundai Tournament of Champions, the true fantasy grind gets underway this week as we look deeper into some key stats and other indicators to best handicap the 144-man field.

Jimmy Walker is your two-time defending champion at Waialae Country Club, taking home the hardware last year with a 23-under par total of 257. Waialae is consistently one of the easiest courses on the PGA Tour in relation to par (37 of 52 last season) despite its tight fairways. And with little-to-no wind predicted, the winning score should end up in the same ball park this week.

The past champions list at the Sony doesn’t speak to a “type” of player winning  year-in and year-out, so let’s dig a little deeper statistically. The par-70 layout handcuffs the bombers from running away with things by crushing par-5s, but a closer look at the hole-by-hole scoring averages from last year’s event reveals a little something.

First, just two short par-5s on the card mean a birdie-fest for everyone, not just the bombers. Yet, the 450-plus yard par-4s, of which there are five, played a combined .592 over par/round, which works out to just over 2.3 strokes/event. That’s where we’re looking — par 4 efficiency from 450-200 yards. We’re also looking at driving accuracy, greens in regulation, proximity to the hole and putting average.

Common threads also point to players who were in the field at Kapalua last week playing well at Waialae, so keep that in mind when setting line ups, placing bets, picking one-and-dones.

Jimmy Walker: Don’t outthink yourself. You’re not sitting Walker as he goes for three straight. At the very least, have him in your lineup in Yahoo! or DraftKings cash games in order to cancel out your opponents.

Adam Scott: Easily the biggest name in the field, but Scott provides an interesting dilemma. He was a fantasy waste last season and the narrative surrounding him is that he can’t putt without the broomstick. However, a few things to consider: he plays an elite schedule and likely won’t be in the big fish, small pond scenario often; he played through the offseason in Australia where he finished in the top-10 in his last three starts; and, as far as the putter goes, there’s no going back. The waffling we saw in 2015 with the short putter one week, the broomstick the next is out the window. He’s got to be committed.

Kevin Na: A sneaky Ryder Cup hopeful, Na is up to No. 23 (!) in the world. He had a strong finish/start to the 2015 in the States and comes back after some time off to a course where he’s played 10 times and top-8’d three times. I like him a lot this week.

Tony Finau: Full disclosure: I’m all in Finau. The equipment change doesn’t scare me at all, in fact, it wouldn’t be surprising to see Finau have a nice Nike debut a la Brooks Koepka last week. His length and iron play makes him a menace on the long par-4s and he makes a lot of birdies (7th on Tour last year). Just needs a hot putter to break through.

Russell Knox: Probably scared a lot of people away with a 27/32 finish last week (The same could be said for Graeme McDowell), but Waialae sets up much better for the WGC-HSBC Champion. Knox was seventh in GIR last year, second in proximity to the hole and fifth in par-4 efficiency 450-500 yards. Good value here.

Matt Kuchar: May lack pop, but he can stack checks (sorry Tron), especially at the Sony where he’s been a top-10 machine, staying inside that top-8 each of his last four trips. Can’t go wrong here.

Brandt Snedeker: Love Snedeker to pick up the trophy this week. A mediocre 2015 may have some a little gun shy, but a solid top-3 last week (where Jordan Spieth was basically playing a different golf course) translates into him being the best player from Kapalua teeing it up in Honolulu.

Charles Howell III: Mr. Waialae. Has teed it up here 18 times, made 18 cuts. 8 top-10s in his last 14 appearances. If you want to risk it, play the Powerball. If you want a sure thing to make the weekend, play Chucky Three Sticks. CH3 will be debuting his PXG irons this week. I like him to be the low Parsons staffer this week.

Chris Kirk: May lack more pop than Kuchar, but cut from the same money-making cloth. Sporting some new PXG irons last week at Kapalua, Kirk was decidedly meh. Played himself out of the offseason with rounds of 70-71-70-72 and should be ready to go on a track where he’s top-5’d two of his last three starts.

Jim Herman: A perfect round-out for your line up, Herman had a solid 2015 and started the wrap around season with three top-25s and a top-10. An accurate driver, GIR machine (second last year) and iron chef (seventh in proximity to the hole), he’s a good putting week away from winning outright and I’m not just saying that because his parents live down the street from me.

Pat Perez: The West Coast swing king, Perez is a viable DK sleeper and a safe bet to make the weekend. Perez has made his last six cuts at the Sony and 12 of the last 14. He also has four top-10s sprinkled in there over that period.

Brandt Snedeker. Coming off of that show at Kapalua, Sneds is the perfect fit for Waialae. He’s got a start under his belt in 2016, a solid finish to build off of and a putter that would sizzle if you dropped into the Pacific. Give me Sneds this week and the $1.044 million first prize.