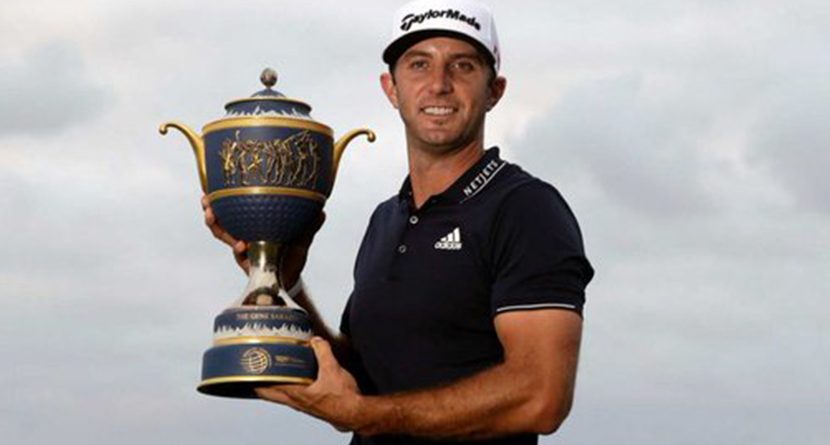 The first World Golf Championship of 2016 is upon us. 67 lucky players will fly in from across the globe to play a golf tournament with no cut and a guaranteed pay day of at least $47,000 just for completing 72 holes at the famed Blue Monster at Trump National Doral. Not bad work if you can get it.

Dustin Johnson took home the hardware last year beating JB Holmes by a stroke. Not coincidentally, Johnson, Holmes and third-place finisher Bubba Watson were the three longest drivers in the field that week — a harbinger for what kind of player you need to be around the renovated Blue Monster.

Speaking of the course, Doral has hosted a PGA Tour event every year dating back to 1962, so you would think there would be some solid course history to lean back on in your research this week. However, you’d be wrong. The resort was purchased by Donald Trump in 2011 and Olympic golf course designer Gil Hanse was brought in to renovate the Blue Course for the 2014 edition of the event.

Since the remodel, Doral has turned from a birdie fest into a bombers delight. That’s where you’re going to see a lot of value this week, so keep in mind the key driving stats when building your lineups.

Our third tournament in a row with a strong contingent of top players means there is more value to be had further down the board. However, with 47 of the top-50 players in the world in Miami — Jim Fuyk (14), Thongchai Jaidee (34) and Jaco Van Zyl (49) are the three who aren’t — there’s even some pretty enticing prices at the top.

Jeff Sherman of GolfOdds.com and the Westgate Las Vegas SuperBook has set Rory McIlroy as the favorite to win this week at 8/1 despite missing the cut last week at Honda. The usual suspects follow with Jordan Spieth at 10/1, Jason Day, Bubba, DJ and last week’s champ, Adam Scott all at 12/1. Rickie Fowler comes in at 15/1 and Henrik Stenson is 20/1.

Lastly, Steve Bamford at Golf Betting System is backing the trio of Stenson, Koepka and Reed in Miami.

With just 67 guys in the field this week, it’s hard to actually pick anything but chalk because realistically — with the exception of Yusaku Miyazato, Scott Hend, Nathan Holman and Jordan Zunic — everyone in the field is inside the top-85 in the world. Stay away from those four and you have to feel good about your chances this week.

It was mentioned up top that this is a bomber’s course. The narrative coming out of Miami this week is that there have been some slight alterations made to the course that will invite some short-to-medium hitters into the mix, but how exactly did the tournament organizers tweak the course to do so? BY ADDING MORE YARDAGE. Admittedly, the idea was to bring fairway bunkers back into play for bombers, therefore making things tougher on them off the tee, but really, it’s just putting the shorter hitting guys at more of a disadvantage.

Everyone is playing four rounds this week assuming no one withdraws — looking at you Hideki and Louis — so guys who make a lot of birdies will be a must for your DFS lineups. Guys like Brooks Koepka, Rory McIlroy, Dustin Johnson, Adam Scott and Justin Thomas populate the top of the birdie average stat and guess what? All of them hit it a long way.

Don’t outthink yourself this week.

Justin Rose. WGC’s are some of most lucrative events on Tour so you can justify burning a big name in one and done this week. Adam Scott, DJ, Koepka… all good choices, but Rose feels like a solid gut play this week for me. He hits it far — 19th in driving distance — and he’s a long iron aficionado — something you need coming into the Blue Monster’s par-5s and long par-4s. Not to mention, he seems a safe bet to score a top-15 this week at worst and could contend with a strong week on the greens.