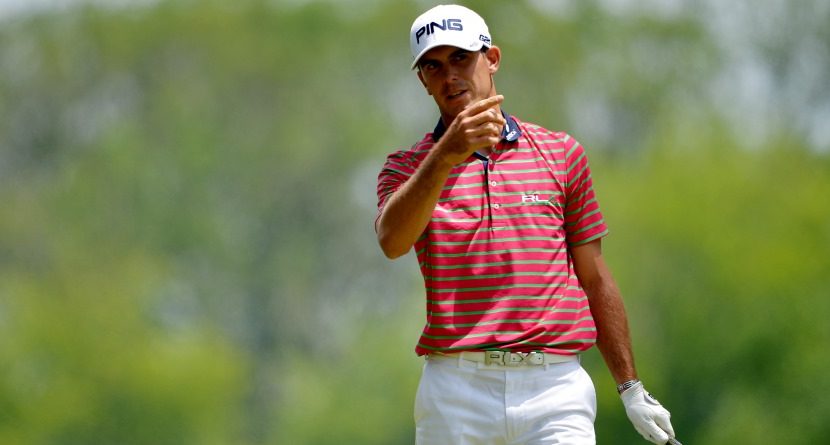 After two rounds, the proficient Phil Mickelson is tied atop the U.S. Open leaderboard at Merion. The man he shares the lead with? Billy Horschel. Who?

Ardent followers of the PGA Tour know the 26-year-old from Florida picked up his first PGA win a couple months ago at the Zurich Classic of New Orleans. Ardent followers of only golf’s majors don’t know Horschel from Michael Kim (the top amateur through 36 holes). This is only Horschel’s second appearance in a major (the ’06 U.S. Open was his first).

So let’s meet Billy Horschel, No. 50 in the world. Five fun facts:

— He’s enjoying his best season as a pro this season, after being forced to Q-school each of the past four years. Horschel’s recorded six top-10 finishes already in 15 events played. Previously, he’d placed in the top 10 just three times.

— By easily making the cut, Horschel guaranteed that we’ll see octopus pants on Sunday. That’s right – he may well be fighting for the U.S. Open trophy while wearing pants full of octopuses. What could top that? A pairing with Luke Donald, who is just one shot back and also slated to wear octopus pants. You can thank Ralph Lauren for that. — If Horschel is in contention on Sunday and paired with world No. 2 Rory McIlroy, brace yourself for a lot of yelling. At the 2007 Walker Cup, McIlroy didn’t take too kindly to Horschel’s “loud and obnoxious” antics while the two were paired up against each other. It fired up the Irishman to “be as loud as he was.”

— Horschel remains one of the more animated players on the course, but has toned it down since losing it at the 2011 McGladrey Classic. He entered that final round in contention, but en route to a 5-over 75 that sent him all the way down to T20, Horschel began launching clubs and so many expletives that he eventually began seeing a sports psychologist.

— The University of Florida graduate and Boston pro sports fan carries four tees and a 1936 quarter in his right-front pocket as a superstition.