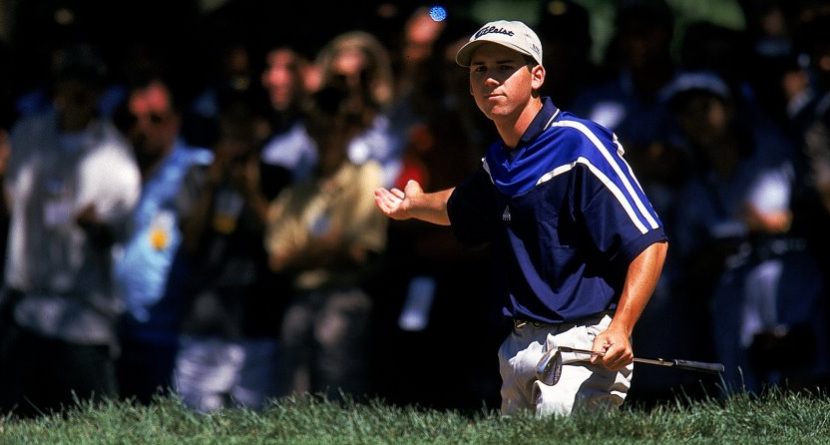 Something extraordinary happened to Sergio Garcia at the Open Championship last month, but it wasn’t that he finished second — there was nothing strange about that. The Spaniard has had to get used to finishing second in majors.

The odd thing was that he walked off the 18th green with a smile on his face, knowing that he had given it his very best shot. And with the roar of the gallery ringing in his ears, Garcia was in a good place.

Now turn the clock back 15 years to the 1999 PGA Championship at Medinah. Tiger Woods was in the early stages of his remarkable career, and we were all desperate for somebody to emerge, somebody who could look Woods right in the eye and put up a good fight. There were hopes that the man might be Phil Mickelson. Or David Duval.

But at Medinah, there was a 19-year-old Spaniard who had already won on the European Tour and was making people all over the world sit up and take notice. It was Sergio Garcia, the embryonic genius.

Back then, his mind was clear. All he wanted to do was to go out there and play, and win tournaments, major tournaments. We all thought that Medinah was too early for the golfer who was known as El Nino.

Garcia had other ideas. His philosophy was that if you were good enough to be playing in a major, then you were good enough to be winning it, whether or not Tiger Woods was in the field. Back then, at the dawn of the Woods era, many players thought the same thing. By the time Woods was done with them, however, they were men whose race was run, who were beaten by Woods even before a ball had been struck. In time, Garcia would become one of them.

But not in 1999. From the start, he played quite beautifully. He opened with rounds of 66 and 73, and was loving every single minute of it.

And when he shot a third-round 68, it meant that he was going into the final round just two shots behind Woods. Given the choice, the teenage sensation would have wanted to play alongside the American, but he ended up in the group immediately ahead. Woods played with Mike Weir.

If he was feeling any pressure, Garcia didn’t show it. He seemed to revel in this experience, as did everybody who watched him, whether at the course or back home in front of the TV.

We were enthralled, believing that we were watching the start of a rivalry for the ages, a duel that would keep us entertained for years to come.

Garcia was fearless, and during that final round he produced a moment of brilliance and a flash of defiance that will never be forgotten.

He struck his drive at the 16th hole, a long par 4, and it came to rest against the base of a tree. Sergio surveyed the scene, drew his 6-iron, took a couple of practice swings and then struck the ball. Bits of bark and grass flew up in the air. And Garcia was off, chasing after his ball as it disappeared over the hill. He leaped and jumped and scissor-kicked, desperate to see where it had gone. Astonishingly, it came to rest on the green, and he got away with a par.

It was only afterwards, as we watched the replays, that we realized how difficult and how dangerous the shot had been. At the moment of impact, Garcia actually closed his eyes to protect them from the flying debris. This was a shot that Seve Ballesteros, his legendary fellow countryman, would have been proud to call his own.

That was the moment of brilliance. The defiance had come three holes earlier, at the par-3 13th. As Garcia holed a long birdie putt, he looked back at Woods, standing on the tee, and stared for several seconds. He was telling him: “Whatever you throw at me, I can take it. Come on Tiger, let’s see what you’ve got. Are you man enough?”

Woods, of course, was man enough and duly landed his second major. In the end, Garcia came up one stroke short. Summing up the tournament, he said, “It was really fun, most of all. It was joy, it was pressure, it was, I will tell you, the best day of my life.”

And, as time went by, and the disappointments began to mount and the majors continued to slip from his grasp, Garcia blamed bad luck, unfortunate bounces, lucky opponents, bad lies in bunkers, noisy crowds and his own lack of ability for failing to win when it mattered most.

He would walk off the final green looking haunted. And then, at Royal Liverpool, at the age of 34, Sergio Garcia finally grew up. “I gave it my very best shot,” he said. “I played as well as I possibly could. But on the day, over the week, Rory McIlroy just played better than the rest of us.”

Now that he has learned to accept that, Garcia just might be ready to turn the corner and look fate in the eye. There would be no more popular winner than the Spaniard.