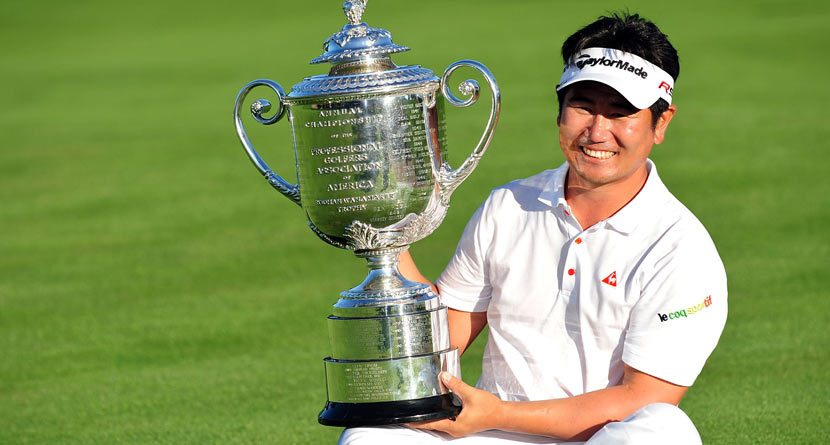 With 14 major titles already under Tiger Woods’ belt, the 2009 PGA Championship at Hazeltine was surely a formality. He went into the final round leading by two shots, and Woods had never lost a tournament of any kind, far less a major, when either leading on his own or sharing it with somebody else.

And, to be frank, Y.E. Yang of South Korea wasn’t going to cause him too much trouble, was he? He had won the Honda Classic earlier in the year, but he wasn’t even the best player in South Korea — that honor belonged to K.J. Choi.

Besides, Yang had a quirky putting stroke, the sort that surely wouldn’t stand up to pressure. He was hardly what could be described as an imposing figure, and nobody gave him a ghost of a chance.

Just 14 months earlier, Woods had won the U.S. Open while playing on a broken leg, and his performance at Hazeltine for those first 54 holes proved he was back to his best. Yang was bidding to become the first Asian golfer to win a major — not just the first South Korean, but the first golfer from that continent.

Could anybody have gone into 18 holes of golf with more pressure on his shoulders?

The course was a monster, measuring 7,674 yards. That, surely, was another thing that would play right into Tiger’s hands. It had staged two U.S. Opens and the 2002 PGA Championship, won by Rich Beem. The rough was punishing and the greens were slick — super slick.

Woods began the day at 8-under-par after rounds of 67, 70 and 71. He led by one after the first round, four after 36 holes and was two in front of Yang and Padraig Harrington after 54 holes.

Yang had ripped through the field on moving day with a magnificent 67.

But the final day did not go according to plan. In truth, Woods struggled with his putting from the start. It was the first time we had seen signs of frailty on the greens from the world No. 1.

Harrington’s challenge ended at the par-3 eighth, when he ran up a 5-over-par 8 and tumbled from second to 10th.

By the time Yang and Woods reached the 14th, a short par 4, they were tied. The South Korean chipped in for an eagle, while Woods could only birdie the hole. For the first time, Yang was in front.

And he sealed his win with a superb second shot struck with a rescue club at the 18th. The ball finished 10 feet from the hole, and when he drained the putt and Woods three-putted for bogey, Yang had indeed made history, winning by three strokes. Yang finished with a 70 for an 8-under winning total of 280. Woods’ final round of 75 was his worst when in contention.

Woods finished second, two shots ahead of Lee Westwood and a young man from Northern Ireland whom everybody said was destined to become a half-decent golfer. His name was Rory McIlroy.

And that was the last time Woods had a real chance of adding to his tally of majors. Within weeks, his world would come tumbling down around him and we would all ask if he could ever be the same player again. We are still asking that question.

As for Yang, well, he got himself a five-year exemption on the PGA Tour. It runs out this year and he has never really repeated those incredible heroics.