What Has Tiger Seeing Red on Sundays? 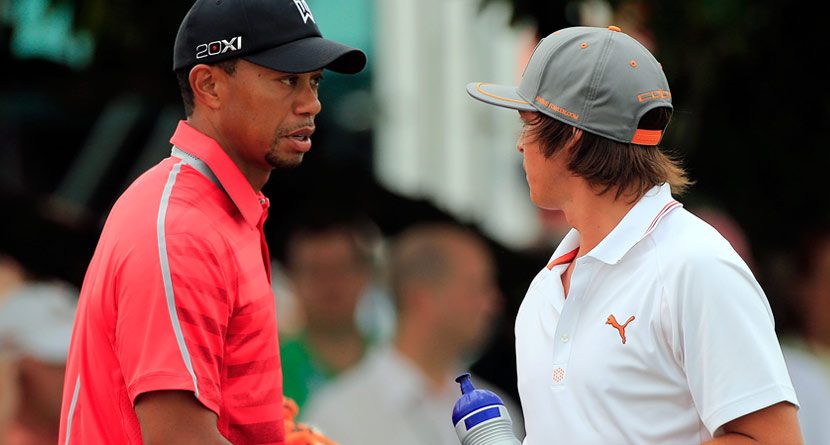 The majority of professional golfers wear some form of hat, cap or visor while playing in a tournament. Many do it as a preference while others are paid to don the accessory by equipment sponsors.

After all, slapping a Titleist logo on a player’s forehead would just be weird. I mean, I would do it, but I also have zero standards. Like, none whatsoever.

Tiger Woods, on the other hand, does have standards when it comes to his on-course wardrobe. For example, Woods prefers to wear red shirts on Sunday. Woods explained his little superstition during Wednesday’s press conference prior to the AT&T National.

“I’ve worn red ever since my college days basically, or junior golf days — big events on the last day,” Woods said. “I just stuck with it out of superstition, and it worked. I just happened to choose a school that actually was red, and we wore red on our final day of events. So it worked out.”

Tiger also prefers wearing a Nike cap while playing, but of the more “traditional” brim variety. In other words, he probably won’t be caught dead wearing the flat-brimmed hat other players – like Rickie Fowler – prefer.

“Definitely not the flat bill,” he said. “Nooo, not that one.”

Let’s be honest; Tiger would look pretty dumb in a flat-brimmed hat. But he’s not the only golfer who would look ridiculous with the duck bill. Take Jason Dufner, for example. His head is slightly smaller than Jupiter, especially with his preferred “I Just Woke Up In A Dumpster” hairstyle. Don’t believe me? Just look at Charley Hoffman. Yowzers.

Rory McIlroy should also stay away from any flat-brimmed hat, despite the enormous comedic value it would provide to everyone. You know who else wears flat-brimmed hats? Leprechauns. Get it? Northern Ireland, leprechauns….