For Furyk Sake! What’s Wrong with Jim on Sundays? 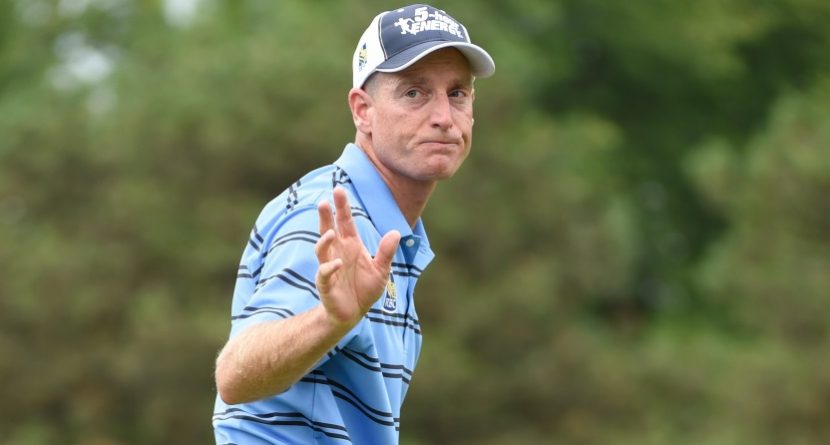 Stop me if you’ve heard this one before: Jim Furyk takes the lead into the last round of a PGA Tour event, only to come up short on Sunday.

Since winning the 2010 Tour Championship, Furyk has failed to capitalize on any of the seven 54-hole leads he has held.

The 44-year-old took a three-shot lead into the final round of the RBC Canadian Open on Sunday. His playing partner, Tim Clark, was also in search of his first win since 2010. Despite hitting three more greens in regulation than Clark on Sunday (14 of 18), Furyk lost by four to the South African, meaning Clark walked off with a one-shot victory. Clark put on a putting masterclass Sunday, while Furyk’s stroke evaded him. Clark gained 3.167 strokes putting in the final round; Furyk’s number was -2.433, a difference of more than 5.5 shots on the greens.

The solo-second-place finish was Furyk’s third in his last seven events. He also finished solo-second at last year’s PGA Championship, where he took a one-shot lead into Sunday.

So what is happening on Sunday?

For a player whose game is built around accuracy and consistency, it is certainly surprising that he has struggled to get over the line so much when holding a lead. Sponsored by 5-Hour Energy, it appears Furyk lacks the energy needed to finish off events.

Since that famous Tour Championship victory in 2010, Furyk has started in the top 10 on Sunday on 21 occasions. He has improved his position on the leaderboard in 12 of those events, which is pretty solid.

However, over that time he has led seven times going into Sunday and failed to win any. Throughout his recent win drought, Furyk has finished second six times with 23 further top-10 finishes.

Plenty of money, but no wins.

So is it just a matter of time before Furyk wins again? Or will he finish his career with 16 PGA Tour wins?

Numbers suggest he will win again, but perhaps he would be best to let someone else lead on Saturday night.