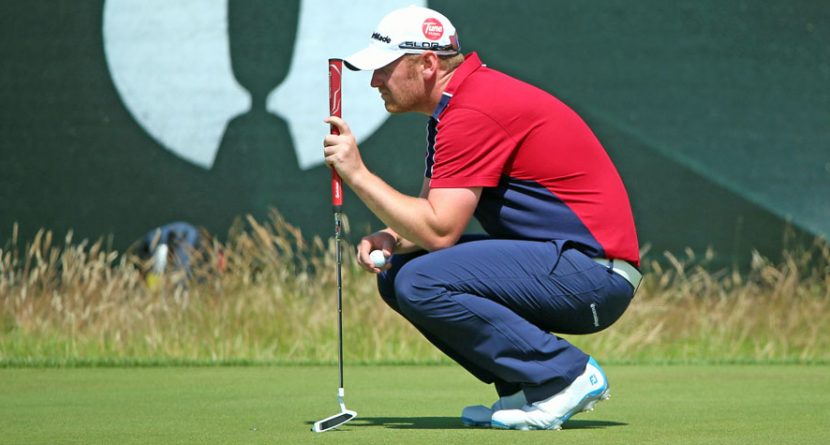 HOYLAKE, England — On Monday morning, John Singleton will report back to work as a forklift driver. Before then, he will have lived the dream that so many amateurs cherish but never come close to.

Singleton works at a resin factory a few minutes from Hoylake and was persuaded by friends to enter qualifying. With just three spots up for grabs at Hillside, he borrowed a couple of wedges from a friend and, sure enough, qualified.

And so he found himself teeing up alongside Marc Warren and Peter Uihlein, taking with him a huge local following. Ironically, he had been due at Hoylake to work as a marshall — never did he think that he would be on the other side of the ropes. The 30-year-old clocks off work at 4:30 p.m. every day and heads over to Eastham Lodge to pound golf balls. He once dreamt of becoming a pro, but gave up on those hopes long ago, although he is clearly a formidable player.

But how would he cope in front of such vast crowds?

This is how he coped: Before he struck his opening drive, he encouraged the crowd to give him a roar, in the same way Bubba Watson and Ian Poulter did at the Ryder Cup in 2012. The crowd duly rose to its feet and gave him plenty of noise. Singleton was clearly a very nervous man, but he absolutely crushed his opening drive. How much of it he will remember is anybody’s guess.

It quickly emerged that Singleton wasn’t along to make up the numbers. He parred the first eight holes before dropping his first shot of the day at the ninth. Out in 36, he was five ahead of Uihlein and three adrift of Warren.

And if he thought the cheers he got at the first were loud, it was as nothing to what happened when he holed out for a four at the 10th for his first birdie of the day. Incredibly, the local hero was back to level par.

A wayward drive cost him a double-bogey six at the 12th, but Singleton’s smile was still as wide as the nearby Dee Estuary. The guy was having a ball out there. Unfortunately, he lost his way somewhat over the closing holes, with dropped shots at the 13th, 14th, 16th and 17th, and his great adventure ended with a 6-over 78. But he remained upbeat afterwards.

“I am disappointed with my finish, but I have just loved this experience,” he said. “It is a dream come true. The crowd were just unbelievable out there. I hadn’t planned to encourage them to cheer me on the opening tee, it was just a spur of the moment thing. Was I nervous? What do you think? I was terrified of duffing it, but the adrenaline was really pumping and I just smashed my opening drive.

“As for tomorrow, I am just going to go out there and try to enjoy the whole experience again, and soak it all up. It’s been awesome, but I know that I can do so much better.”

It was also quite a day for Ashley Chesters, who qualified after winning the European Amateur Championship. The Englishman birdied his opening hole and went on to put together a superb round of 70.

Not quite such a memorable round for Bradley Neil, the British Amateur champion, though. He started with two bogeys and then ran up a seven at the fifth on his way to a bitterly disappointing 79.