From One Story to Another 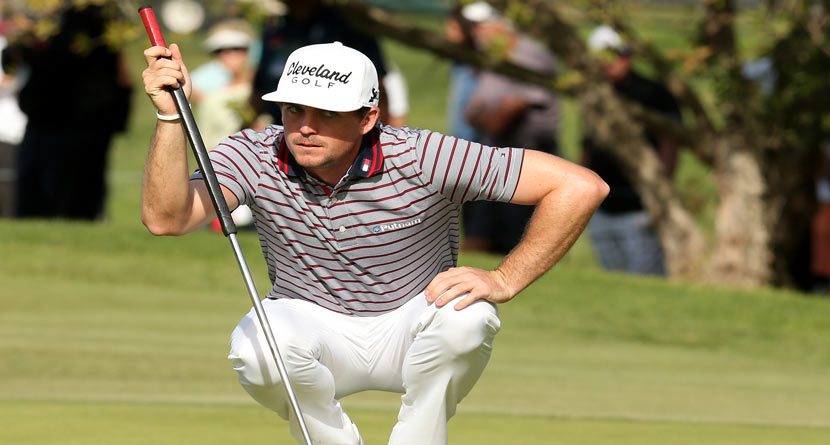 Bled dry of dramatic tension and star power long in advance of the final, last week’s WGC-Accenture Match Play Championship was, by Thursday evening, a tournament desperately in search of a story.

Less than 24 hours later we had one, in the form of a controversy entirely of the PGA Tour’s own confection. Give them a day, and they’ll give you a headline: so these guys are good, after all.

Commissioner Tim Finchem, it was whispered to certain influential parties, would avail of Sunday’s captive television audience to declare the PGA Tour’s opposition to the forthcoming United States Golf Association (USGA) and Royal &Ancient (R&A) ban on anchoring. His hour of public activism wouldn’t end there: there’d be a press conference, complete with the asking and circumlocutory answering of questions! No substitute for Tiger versus Rory, sure; but in the end, it beat the hell out of Hunter Mahan’s scrap with the lost Osmond brother. (Consider that the slender, silver halo of an otherwise dark and gloomy cloud.)

That’s not to say Finchem burst from his chauffeur-driven car with all guns blazing. The media tour itself was a predictably bland mess of studied mannerisms and dense management-speak. The real action lay between the crafted soundbites, as it were, on the submerged levels of political subtext and historical precedent. This, after all, was something very strange indeed: a bid by a commercial entity to drive a wedge between golf’s governing bodies and the sport they would administer.

Though his argument struck an occasionally uneasy balance between vague generalities and equally questionable specifics – claiming, for example, that an unnamed study had suggested nearly 20 percent of amateurs were using long putters – the essence of his argument was simple: in the absence of detailed scientific data outlining the competitive advantage afforded to proponents of anchoring, the PGA Tour would oppose the implementation of a ban. To do otherwise would be “unfair” to those players whose livelihoods depend on anchored strokes.

What’s more, in having failed to arrest the method’s growth in popularity at any point prior to its mainstream breakthrough, golf’s governing bodies had effectively surrendered their right to legislate on the issue.

“You know, the USGA did on multiple occasions look at this and come to one conclusion; 25 or 30 years later now they’ve come to another conclusion, at least tentatively. They’ve asked us to give our comments. All we’re doing at this point is saying this is our opinion.”

That final appeal to the power of dialogue and conciliation was only one of many made throughout the day. This wasn’t part of “a donnybrook” between warring factions, nor should it be considered an ultimatum; the PGA Tour, after all, “holds the USGA in the highest regard.”

The refrain was as insincere as it was insistent. If this was a simple, routine disagreement between institutional allies, why should it compel an appearance on (inter)national television? Too busy winning hearts and minds and debating with a broadstrokes rendering of USGA supremo Mike Davis, the Commish never really got around to answering that question. Because this wasn’t just corporate blah, it was propaganda blah designed to outmaneuver less astute, if more earnest, opposition.

It was interesting to note the number of times Finchem allowed the spectre of bifurcation – an official parting of the ways between the USGA and PGA Tour – to materialise suddenly mid-presentation, like a particularly malevolent fairground mole. Each time, he’d thump it away with a polite platitude or two, or a reassuring appeal to consensus, but never was the blow quite convincing enough to dismiss the issue altogether. There was always a caveat or conjunction left hanging, slightly menacingly, in midair.

“I think in a perfect world, we’d all like to see the rules be exactly the same,” Finchem said, “and I think we continue to believe that if possible we should keep the rules, the structure of the rules the same, and if possible, without bifurcation. And I think that’s doable.”

In the absence of any suggestion of compromise – that is, short of a decision by the USGA to abandon its campaign and, in so doing, neuter itself publicly – it all began to feel a little bit threatening.

The USGA responded later with a statement of its own, rather dryly reaffirming the integrity of its administrative process and promising a resolution to the saga later in the spring. If it was an attempt to defuse the situation, prevent a whirlwind of analysis and speculation from prolonging Finchem’s moment in the spotlight, it hasn’t really worked. Catastrophes and revolutions of varying scale and import have and continue to be forecast.

Lost amid the din, however, buried beneath all the as yet unrealised scenarios, has been the role of Finchem’s intervention – the very fact of it, as opposed to its impact in terms of changing USGA policy – in reordering the sport’s hierarchy of governance.

In intervening so pointedly to protect the interests of his members, or at least those 16 players who constitute the PGA Tour’s Player Advisory Committee (PAC), the commissioner has, for the first time in the game’s history, asserted the right of elite tournament professionals to frame the rules in accordance with their own immediate interests. Integral to Finchem’s argument isn’t just an understanding that Keegan, Webb and Ernie are more deserving of a say in matters legislative than an alliance of the USGA and the majority of amateur golfers, but that they are, by default, more deserving of a livelihood than the orthodox putters who would take their place.

The whole argument hinges on a crude sort of elitism, and to countenance it as we have risks granting undue power to a minuscule fraction of the game’s least impartial exponents and the profit-driven enterprise they rely on for employment. That all this self-interest should come wrapped in populist myths about “growing the game” makes it easy to deride the Tour for hubris, but who’s to say its influence is more imagined than real?

Sunday’s theatrics may or may not sway golf’s governing bodies; they may or may not hasten the march of technology; but in making explicit the agenda of a new and powerful lobby – one, let’s not forget, with the backing of several important interest groups – they’ve already wreaked a sort of political chaos. There’s no going back.

Which is a pity, because on second thoughts, Kuchar versus Goatee Guy doesn’t sound all that bad.