Fuzzy Zoeller Pays Up On His ‘John Daly At 50’ Bet 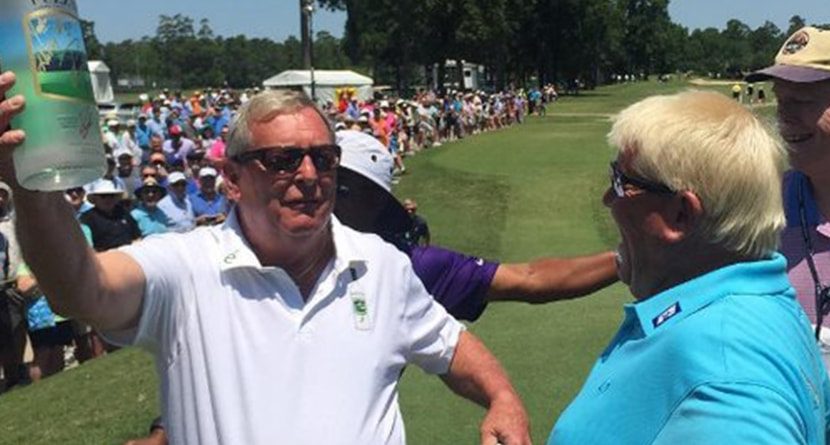 John Daly is now 50 years old and one round into his PGA Tour Champions career — a 2-under par 70. As if getting his own bobblehead wasn’t enough to kick off his senior-circuit debut, his buddy Fuzzy Zoeller paid up on a bet the two had made decades ago… kind of.

Zoeller bet Daly in their younger years that the way JD was living his life, he’d be willing to bet $150,000 that Daly wouldn’t make to 50 years old. Now that Long John is over the half century mark, Zoeller had to pay up. The only catch was Daly said the pair didn’t shake on the bet.

The details of the bet were laid out in a USA Today profile of Daly at 50:

“I think it was Tuesday morning and we played nine holes and went to T-Bonz (restaurant) and had some lunch,’’ he recalled. “Next thing I know, we were in the same clothes playing Wednesday at 7:30 in the morning and the par-3 tournament. We stayed through the whole nine (holes), drinking, having a good time and eating.

But after recalling the story, Daly said he and Zoeller never shook on the bet.

With his bank account safe, Zoeller paid up the compromised portion of the bet on the first tee Friday afternoon.

So it’s not the $150K originally wagered, but Fuzzy makes good on his bet that @PGA_JohnDaly wouldn’t make it to 50.https://t.co/w6dgfEE1p1

Something tells us once JD knocked down the bet to a bottle of vodka, Fuzzy was going to be happy to oblige.