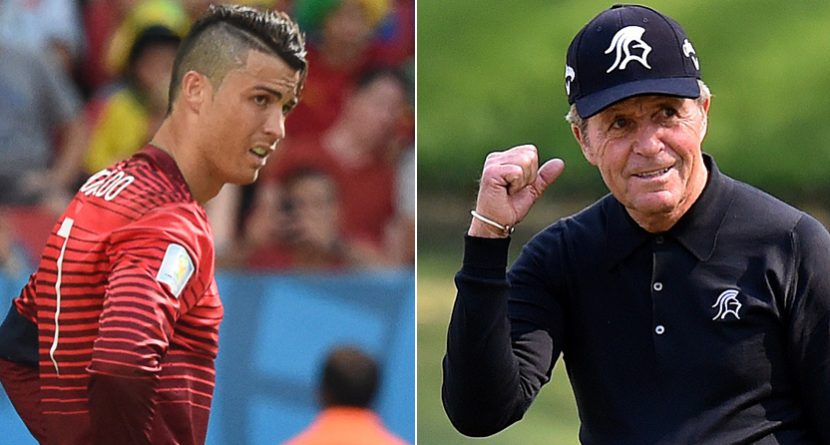 Master of the retweet and the sit-up, Gary Player is thrilled the U.S. men’s national soccer team has advanced to the knockout stages of the FIFA World Cup. That may be sad news if you’re one of the 135,000-plus who follow Mr. Fitness on Twitter.

Over a two-and-a-half-hour span Thursday, the 78-year-old nine-time major winner tweeted or retweeted 25 times about the USA vs. Germany match. He passed along messages from Nike and Fox Sports and MLS, engaged in a playful banter with a friend, and that’s not even including all the retweets from Wimbledon. Does he tweet in between pushups?

Anyway, mixed in with all the pictures and links chronicling world sport, Player asked one Cristiano Ronaldo to help out his American soccer pals. The reigning FIFA Golden Ball winner stars for Portugal, which was playing against Ghana at the same time as the U.S. and Germany; all four teams were playing their final games in Group G. The Americans were trailing 1-0, so if they were going to lose, they needed Portugal to either beat Ghana or tie. At the time, that match was square at 1-1.

So Player took matters into his own tweets:

Urgent message to Ronaldo. Now would be a very good time to score your first goal at #WorldCup2014. Regards @ussoccer

Sure enough, this happened minutes later:

And Player followed up:

The results stood, as Portugal topped Ghana, 2-1, and the U.S. fell to Germany, 1-0. Germany wins Group G, the Americans take second and advance, Portugal and Ghana are goners.

Player, who’s from South Africa, received some flak for essentially cheering against an African team, but he’s spent enough time in the U.S. to know one thing: Every World Cup brings hope that Americans will finally fall in love with the beautiful game. He proclaimed his stance prior to kickoff:

As much as I love Germany, it would be simply huge for #USA football to win today #worldcup2014. Let’s go @ussoccer