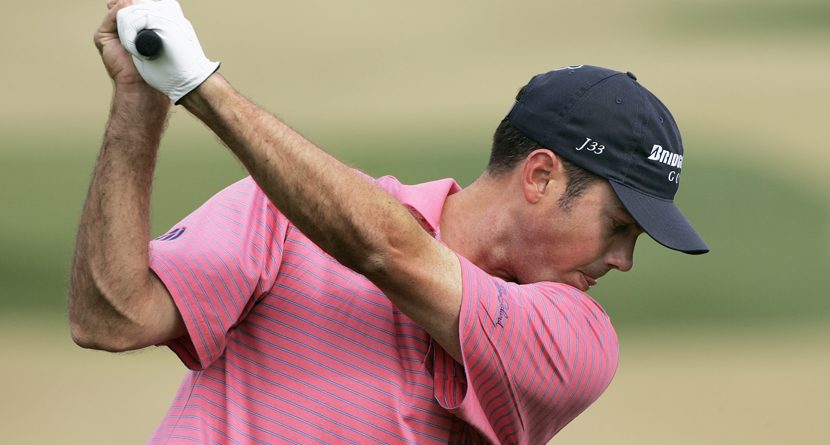 My transformation to a single-digit handicap is moving along quite nicely as I get ready to take my new swing to the course (if it ever stops snowing in Chicago, lousy March weather). Over the past few weeks we have covered the correct setup position, posture, lower body shift and weight transfer in the golf swing. This week we will cover the proper way to load your backswing in three very easy steps: tilt, hinge and turn.

Greg Baresel, my golf instructor and Jedi-Golf-Master over the past few weeks, identified a significant flaw in my backswing this week. I tend to have my club fall way past parallel at the top of my swing, mainly because of excessive wrist hinge late in my backswing. While I extended my arms appropriately and on-plane, Greg suggested that I hinge my wrists much sooner to “restrict” my swing from going too long. This should help my club control as I begin my transition to the downswing and ultimately impact.

Can I be honest for a second? I’ve been obsessed with the “proper” backswing for over a decade. I have literally watched thousands of hours of video and YouTube snippets dedicated solely to one half of the golf swing. It’s kind of disgusting, actually. However, despite all my hours of researching the backswing, it wasn’t until Greg pointed out three key movements that almost every professional golfer uses in his or her own swing.

In looking at the slow-motion video of Rory McIlroy’s swing above, you will notice how his shoulders and arms all move in one piece as he begins his backswing. Fittingly enough, this is the “one-piece takeaway” you may have heard of in the past. What you can’t tell from watching this video is how this action actually feels when doing it correctly.

Initiating the proper backswing begins with a tilting of the shoulders. For a right-handed player, this literally feels like you are dropping your left shoulder down toward the golf ball. Do absolutely nothing else with your hands or arms; focus only on pushing your left shoulder down to the ball. If you do this move correctly you will notice that your arms naturally lift to about waist-height without even thinking about it. Greg explained that this “effortless lift” of my arms was the proper way to execute the one-piece takeaway.

The next step in the proper backswing — and a way to position your hands properly to prevent over-swinging — is to hinge the wrists. When you watch Rory’s swing again in the video, you notice his wrists hinge up just before his arms become parallel to the ground.

This small hinge is critical to getting your club on-plane and in a powerful position at the top of your backswing. Once I completed my initial shoulder tilt in Step 1, Greg told me to immediately hinge my wrists for my next step. With these two small movements I have already completed two thirds of a proper backswing. It really is that simple. (Note: It’s important to mention that I still haven’t consciously done anything with my arms at this point. No lifting, no turning, no nothing.)

The third and final step in the proper backswing offered the second “Ah Ha!” moment in my lessons to date. This move also went against all my previously-learned swing mechanics.

Watch the video of Rory one more time. After he hinges his wrists you will notice that his shoulder tilt stops. Believe me; I know the video appears to be telling you something different. It looks like he is still tilting his shoulders and lifting his arms up toward the sky. I am promising you that he is doing something entirely different.

Focus on Rory’s stomach, specifically his navel. You will notice that he is turning his torso and stomach to force his arms “up” to the top of his swing. He’s not raising his arms or doing anything fancy with his hands. He’s simply twisting his stomach to his right, creating a coil of large-muscle power. You will also notice that his arms and hands remain in front of his chest as opposed to falling too far behind his body.

That’s the secret, folks! Three very simple body movements — a tilt, a hinge and a turn — is all it takes to execute the perfect backswing. Granted, Rory is a bit more flexible than most amateur golfers so he is able to turn his torso more than you or I. Even still, it is critical to understand that he is doing almost nothing with his arms or hands.

Use your bigger shoulder and torso muscles to generate power in your swing. You will be pleasantly surprised at the results.