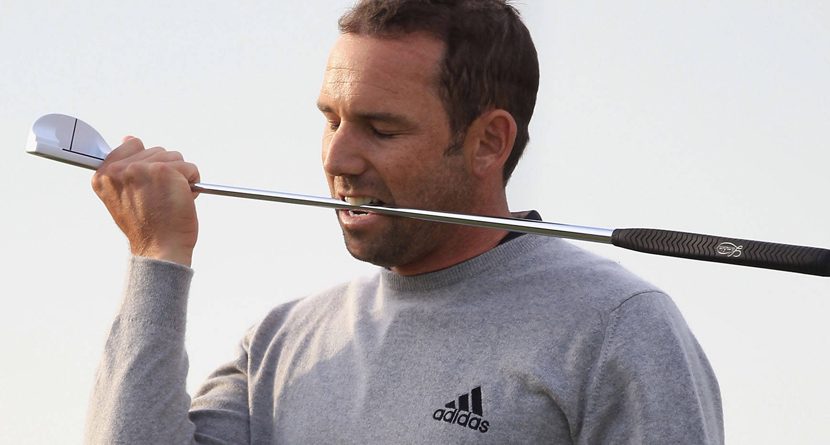 Things don’t always  go as planned on the golf course and sometimes it can get ugly. On the day of our great country’s birth, we look back at some of the fireworks of golf. Here’s our list of the most explosive  fights and tantrums on and off the course.

Woody Austin vs. His Golf Bag

Austin is a hothead who’s known for two things: winning the PGA Tour’s Rookie of the Year title as a 31-year-old, and once beating himself in the head with his putter until he broke it. He continues the golf club abuse in this video clip, where no piece of equipment is safe from destruction.

Phil Mickelson vs. Rees Jones
Mickelson’s one of the world’s most celebrated golfers. Jones is one of the game’s premier golf course architects. But that’s where the similarities end. Mickelson has severely criticized several of Jones’ designs and renovations, including Torrey Pines and Atlanta Athletic Club. After Jones renovated Cog Hill, Mickelson suggested that other designers should be called in to fix his work, “guys that know what they’re doing.” Jones’ response to Phil’s repeated criticism? “Phil’s just trying to round up some course-design work for himself.” Mickelson countered by offering to redesign Torrey Pines for free.

Bubba Watson vs. Steve Elkington
At the 2008 Zurich Classic, Watson felt that Elkington was moving or walking too often during Bubba’s shots – he finally hit his breaking point and spoke out, saying “Veterans can kiss my ass.”

Sergio Garcia vs. His Clubs
Garcia has had temper problems throughout his career: he spit into the cup at the WGC-CA Championship and flipped off fans at the 2002 U.S. Open. One of his greatest hits came two years ago at the Thailand Golf Championship, where he sent one of his irons to a watery grave.

Greg Norman vs. Tim Finchem
PGA Tour Commissioner Tim Finchem has been a thorn in Greg Norman’s side since the 1990s, stemming from a feud over the Shark’s plan to start a world golf tour. Finchem killed the plan, then started the World Golf Championships just a few years later. Norman later challenged Finchem to release the PGA Tour’s financial statements, a request the commissioner ignored. Although Finchem was instrumental in making Norman a Presidents Cup captain in 2011, it’s unknown if the two have reconciled. As Norman said in 2004, “Never will I forgive Tim Finchem, even if he inducts me into a hall of fame once a week.”

Tiger Woods vs. The Gallery
It was November 2009. In just one week’s time, Tiger Woods’ sex scandal would erupt and send his life spiraling out of control. But first, he was on his way to winning the Australian Masters when he hit a poor tee shot and decided to launch his club into the crowd.

John Daly vs. Sportsmanship
At the 2011 Australian Open, Daly was halfway through his round when he dunked an approach shot in a lake. Not content to lay up, he tried again. And again. And again. He left seven balls in the water, then walked off the course, also getting himself uninvited from the Australian PGA Championship scheduled for two weeks later.

Steve Williams vs. Phil Mickelson
Best known as Tiger Woods’ former caddie, Williams has his share of enemies-but he had special animosity for Phil Mickelson. “I wouldn’t call Mickelson a great player, ’cause I hate the prick,” he told The Guardian newspaper in 2008. Later, he rubbed salt in the wound, explaining to a New Zealand paper that, “He pays me no respect at all and hence I don’t pay him any respect.” Mickelson took the high road in his response, “After seeing Steve Williams’ comments all I could think of was how lucky I am to have a class act like [Jim “Bones” McKay] on my bag and representing me.”

Henrik Stenson vs. Himself
Henrik Stenson is a maniac who famously buried his club into the 18th fairway at this year’s Masters, broke a tee marker at the 2007 British Open and threw his wedge into a lake at the Dubai Desert Classic. But the golf gods got him back at the 2011 U.S. Open, where Stenson furiously broke his club and injured himself in the process.