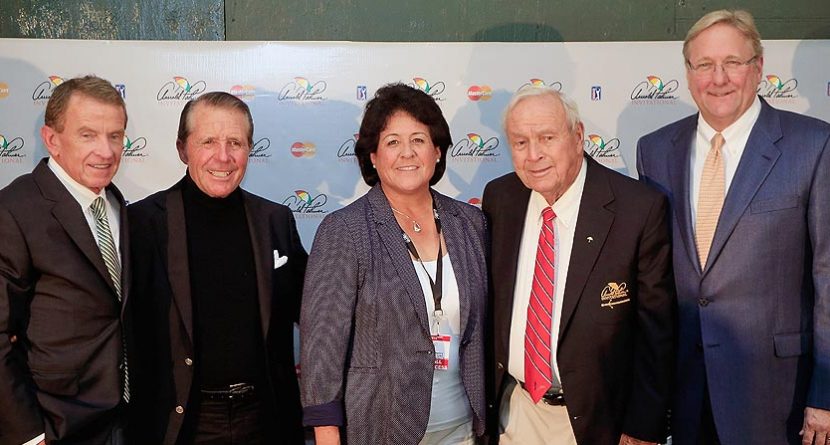 Major changes are coming to the process of being inducted into the World Golf Hall of Fame.

The organization announced Monday that the induction process starting in 2015 will be governed by a selection commission made up of 16 individuals who will be responsible for electing candidates into the Hall of Fame, with each inductee needing at least 75 percent of the vote to gain entry. The GHOF tweeted Monday that the selection commission will be co-chaired by members Nancy Lopez, Arnold Palmer, Gary Player and Annika Sorenstam, who were all on hand for the announcement.

The Selection Commission will be Co-Chaired by HOF members Lopez, Palmer, Player & Sorenstam…http://t.co/GaBKIwnine

The committee will also include the members of the World Golf Foundation Board of Directors and a mix of institutional and at-large seats.

Among the changes, the male and female competitor categories will have similar criteria for qualification, such as a player needing 15 or more official victories on approved tours, or at least two victories among approved major events. Each player also must be at least 40 years old at the start of the year selections are made, or at least five years removed from active competition. The veterans category will include players whose careers were primarily completed before 1975 and the lifetime achievement category will continue to be made up of individuals who contributed to the game from outside of the competitive arena.

The new process will begin with the selection sub-committee meeting this spring to debate the candidates in all four categories before presenting five finalists in the male and female categories, and three each in veterans and lifetime achievement to the selection commission. In the summer, the commission will discuss the merits and vote on the 16 finalists, with each new member needing at least 75 percent of the vote and each class including no more than five inductees.

PGA Tour commissioner Tim Finchem said the changes will begin with the Class of 2015, which will be announced later this fall, and were the result of an extensive review of the ballot and nomination process announced last fall. The review included an evaluation of the ballot system and voting body, along with criteria such as tournament victories, age and the changing dynamics of the game and its constituents.

“The Hall of Fame has established itself as the place to celebrate golf’s greatest players and contributors, and this process will ensure it maintains that place as the game continues to grow and evolve,” Finchem said. “The World Golf Foundation Board of Directors unanimously approved the changes to the process and we applaud the Hall of Fame team for working diligently to make this happen, along with all of the Hall of Fame members who have agreed to participate.”

These changes open up selection for a variety of players.

For example, Laura Davies will now qualify on the women’s side, while David Graham, who has two major victories, will now have a better opportunity for induction on the men’s side, as will Jose Maria Olazabal. Angel Cabrera, who has played the majority of his career in South America, could qualify with two major victories, as could Retief Goosen. Andy North, who has a pair of U.S. Open victories, is also qualified to get in.

Fresh off this past weekend’s Arnold Palmer Invitational, the legendary Palmer called the changes a way of  “keeping the bar for induction high.”

Other Hot Links:
– Could Balls of Steel Improve Your Golf Game?
– This Mini Golf Course Made Out of Snow is Amazing
– The Most Extreme Golf You’ll Ever Experience
– Extreme 19th: The World’s Toughest Par 3