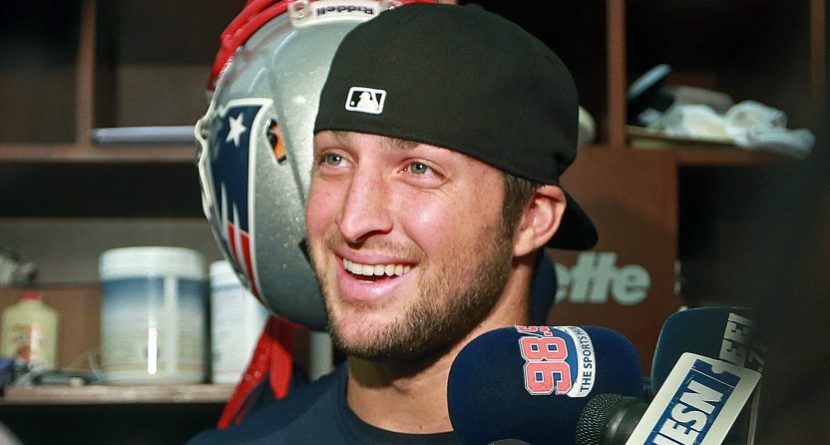 Since Tim Tebow was cut at the end of August by the New England Patriots, the clamor surrounding the love-him-or-hate-him quarterback died down rapidly. No NFL teams picked him up and he’s rarely been seen or heard.

So Dewey Arnette decided to change that. The golf professional from Jacksonville single-handedly revived the Tebow movement.

According to ESPN.com, Arnette bought a $1,200 ad in Monday’s Florida Times-Union newspaper. Directed at Shahid Khan, the Jacksonville Jaguars’ owner, the ad said, “Dear Mr. Khan, Sign Tim Tebow & we will fill the stadium! Signed, The Citizens of Jacksonville.”

That was the latest in a series of Tebow promotions staged by Arnette and his son, John. They also bought banners to be flown around Jacksonville’s EverBank Field via airplane, radio ads, billboard ads, and “Tebow to Jacksonville” messages on placemats at a popular restaurant. In addition, they stood in Jacksonville’s San Marco Square holding “Tebow to Jax” signs and handed out Tebow T-shirts in the streets.

Arnette, who played on the PGA Tour in the late ’80s and early ’90s, can afford all this because he charges $400 an hour for golf lessons. He’s even tutored Back9Network ambassador Padraig Harrington.

“I expect it to completely fall on deaf ears,” Arnette told ESPN. “But I just wanted to give it a try. Yeah, this isn’t one of those real injustices in the world. But I feel bad for him. He deserves a shot.”

Tebow played at a Jacksonville high school, went on to win the Heisman Trophy and a couple national titles at the University of Florida, and remarkably led the Denver Broncos to the playoffs in 2011. The team signed Peyton Manning soon thereafter, trading Tebow to the New York Jets, where he was never given much opportunity to play. The Patriots signed him over this past summer, but released him before the season.

Considering the Jaguars have long been one of the NFL’s bottom feeders, signing Tebow has always made sense to many fans. But instead, the Jags opted to stick with their top draft pick from 2011, QB Blaine Gabbert, who has never lived up to the billing of a first-round draft pick and is no longer the team’s starter. Still, Jacksonville GM Dave Caldwell has stated he does not want Tebow.

Surely Tebow appreciates the efforts of Arnette, but at this point it seems as if Tebow has a better chance of getting a free lesson from Arnette than he does of getting another shot in the NFL. According to ESPN, Tebow recently signed with a broadcasting agent to explore a possible on-air future.

Related Links: When We Thought Tebow Was Going to Canada | And L.A.