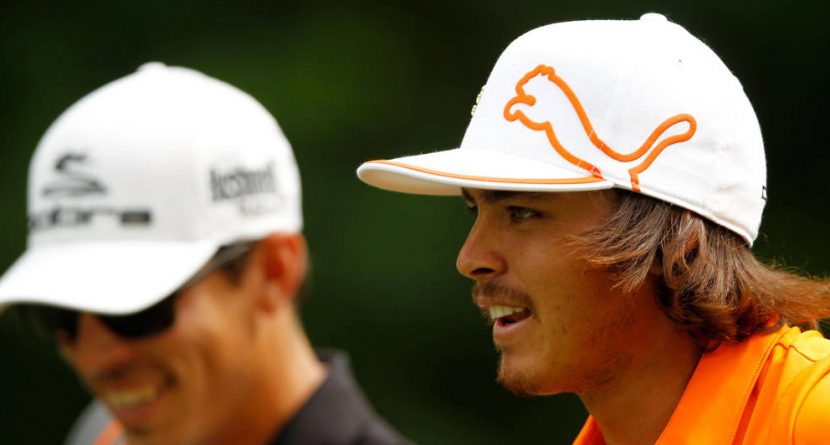 “Go time.” It’s what Rickie Fowler typically tweets before teeing off in a tournament.  And Sunday at the Wells Fargo Championship in his 67th start, Fowler’s mantra fit the outcome perfectly.

Five hours after sending “#GOTIME” into the Twitter universe, the 2010 Rookie of the Year stood on the first playoff hole and finessed an iron shot from 132 yards to 4 feet from the hole for a birdie putt and his first PGA Tour victory.

It was a gamble grabbing that 51-degree wedge on the treacherous 18th at Quail Hollow, but the brash 23 year-old former motocross prodigy doesn’t know how to approach a shot – or life – any other way.

Every day is “go time” for Fowler: whether he’s ripping it at his target on the golf course or killing it in the gym six days a week. He prepares and trains for moments like Sunday.

Coach Noss has had great success in training his players based on the principle of functional training – a method that reflects what is functional to the specific sport. It prepares the body for every possible movement required in the game. Because swinging a club places a player in an unnatural position, functional training puts a premium on flexibility, as well as posture and stability.

“You look at someone like Rickie who never really had a swing coach. He’s unorthodox. We don’t want to interfere with that swing,” Noss said. “He’s more of a feel player. So you focus on making him stronger, more flexible, with greater endurance on several planes of motion.”

The self-taught 5’10’, 150-lb Fowler is one of the longest drivers on Tour, in part to a freewheeling, natural, non-traditional swing where an extraordinary shoulder turn helps him generate incredible power. One important aspect for Noss is incorporating exercises to balance the right-handed Fowler’s left side of the body to increase the efficiency and flow of the kinetic chain. This helps to prevent injury, and enhances flexibility and torque.

Noss also knows the game is overwhelmingly mental, which is why a consistent, methodical fitness regimen is also necessary for that mental sharpness. In an endurance sport where it can be slow and taxing at times, patience is key. And one place patience is learned is in the gym.

Like, on Sunday, when Fowler was in a 3-man playoff with D.A. Points (also one of Noss’ clients) and fellow phenom Rory McIlroy. When the tangerine man approached the 73rd hole, his natural talent was certainly at work, but he later credited his patience and game management as the difference in the win.

“We prepare our players to manage anything the game throws at them, so that once they step on that tee box and are out of their comfort zone, it’ll be easy.”

So, what does a typical Rickie fitness routine look like on a week he’s not playing in a tournament?

“We start the week with a power/plyometrics routine, then switch to strength mid-week and finally to pure golf function at the end. He’ll work out every day but Sunday. The average time for a workout is one hour. We work from ground up, with a lot of compound body movements, 20-30 exercises, and we do cardio sessions on opposite days.”

The goal is to have every single muscle, ligament and joint necessary in swinging a club, to be ready for peak performance in any circumstance.

As for tournament week, Noss says it always varies, but generally Rickie will not partake in as rigorous of workouts. The key for those days leading up to Thursday is making time to keep his body and mind in a training mode: ensuring the muscles are firing, using flexibility and functionality movement patterns. But Noss did note that it is difficult balancing that with all of Rickie’s tournament and sponsors’ responsibilities.

“The more successful a golfer is, the less amount of time he has to train.”

It seems unlikely, however, that Fowler will ever let up, even after his breakthrough achievement on Sunday. It’s just not who he is.