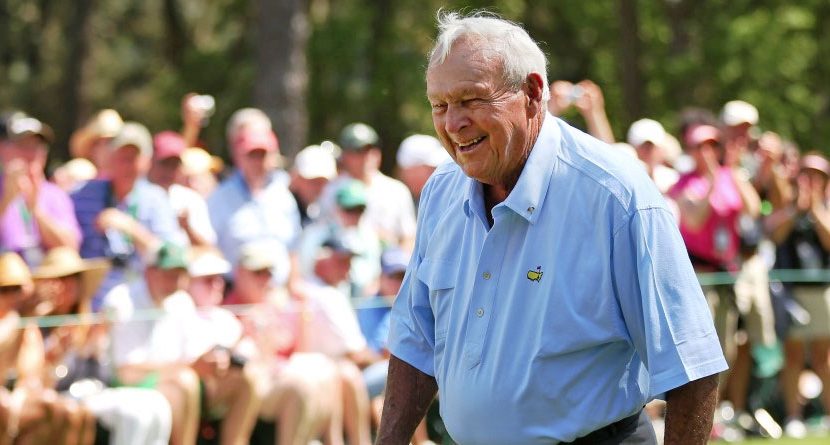 The legendary Arnold Palmer celebrates his 85th birthday on Wednesday, and if there were ever any doubt about the impact he’s had on the game, the King is reassured today. Love is pouring in from all over, including from some of his contemporaries – Jay Haas, Tom Watson, Gary Player, and Jack Nicklaus – who narrated one of Palmer’s favorite poems: The Man Who Thinks He Can, by Walter D. Wintle:

Dozens of other pros expressed their congratulations on Twitter:

Happy Birthday to my Golf Idol! Thanks for all you have done for the game of golf. I feel very fortunate to know you! #85 #TheKing #API

Happy Birthday Mr. Palmer! Looking forward to seeing you next year at the @APinv.

Happy 85th to the King, Arnold Palmer. On and off the course you are an inspiration!

Love this pic of the King in the locker room at Old Palm. pic.twitter.com/vnqBRue8XO

Happy Birthday to Mr. Palmer. He is what a role model should be. #icon

Happy 85th birthday Mr Palmer! A man responsible for transforming our sport and continues to do so today

Happy Birthday to one of the pioneers of our sport. Mr. Palmer 85 years young! #truechampion

Happy 85th birthday to the king, Arnold Palmer. Transformed the game of golf.

Happy Birthday Mr. Palmer! Thank you for taking this picture with us. Can’t wait to get back to the @APinv! pic.twitter.com/HZwfjCASwc

Happy 85th Birthday to Arnold Palmer. He made the game what it is today! #theking