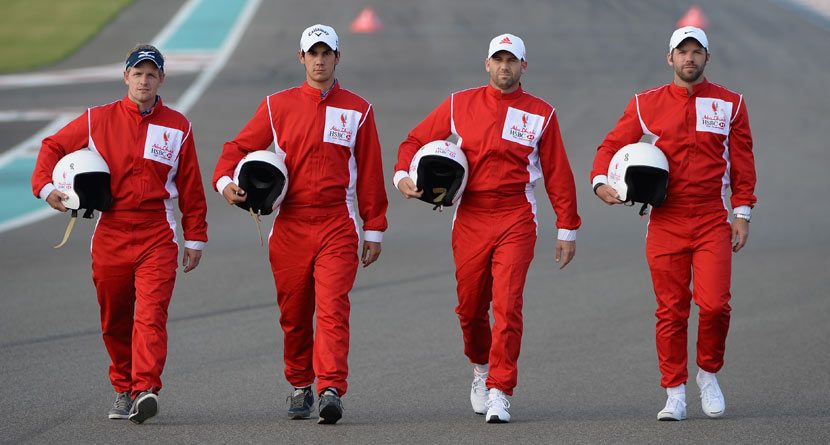 The Abu Dhabi Grand Prix is an annual stop on the Formula One racing circuit, and it takes place at the Yas Marina Circuit, a race course that sits on the man-made Yas Island about 30 minutes outside of Abu Dhabi. The best F1 racers in the world know its 21 turns very well.

Four of the best golfers in the world – Luke Donald, Sergio Garcia, Matteo Manassero and Paul Casey – got to test their racing skills on the track this week while in town for the European Tour’s Abu Dhabi HSBC Golf Championship.

Well, they raced, but didn’t exactly burn rubber. They “sped” around the course in golf carts – vehicles at the complete opposite end of the spectrum from F1 race cars.

Despite some of his competitors cutting corners, Luke Donald nabbed victories in both the time trials and four-cart race. He didn’t get anything like Kobe beef for the victory, but it is his first win outside of Japan since May 2012.

Other Hot Links:
– TV Preview: Back9Network Original Programming
– Video: Ahmad Rashad Hassled By Random Guy On Driving Range
– Rory McIlroy Dishes on How He Proposed to Caroline Wozniacki
– Lance Armstrong Has His Handicap Down to a 9
– Fitness Not a Fad on PGA Tour