9 Golfers That Could Have Played Another Pro Sport 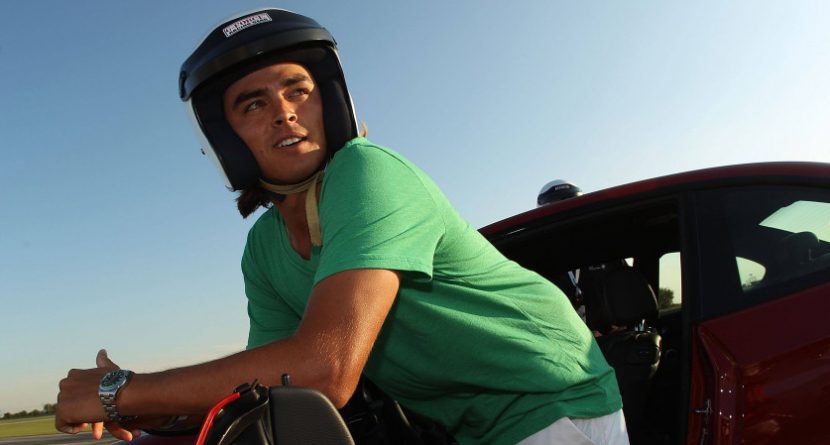 Prior to Eli Manning doing his best to match big bro Peyton in the NFL’s first week — he could only muster 4 TDs to Peyton’s 7 — basketball superstar LeBron James was showing off his throwing arm. Judging by the Cowboys hat he donned, we’re assuming he wasn’t pulling for Eli’s Giants, so he went home happy when Dallas pulled out the 36-31 victory. But LeBron’s appearance again sparked the question: Could he play in the NFL? It seems obvious — he has the size, speed and strength. Which led our minds to wander even further: Which golfers could play another professional sport?

This is what we came up with:

Johnson grew up playing hoops in Irmo, S.C., and his grandfather played basketball for South Carolina University in the ’60s. Plug the long-hitting 6’4″ 190-pound hoopster in at small forward and let him hit one from way downtown, or bang around inside and get to the line. We can hear Marv Albert now, “DJ, yesssss! It counts and the foul.”

Lance Armstrong who? Spiderman would dominate the cycling circuit. We’re not sure how the cycling virtuoso would read the varied terrains of his route as uniquely as he reads greens on the course, however. Watch out NFL, Tiger lives for Sundays. Eldrick “Prime Time” Woods would play defensive back AND wide receiver — and maybe kicker, too. Because we know Tiger is an overachiever and control freak, he’ll need to play for the Houston Texans in order to wear that Sunday red.

The 6’1, 195-pound baller played Division II basketball at Washburn University. He probably has a wicked cross-over and a killer jump-shot. Let him run the show at point in the NBA.

He was a two-way lineman at Lincoln High School in Stockton, CA where he also played three positions in baseball. His father was a punter for the New England Patriots, so football is in his blood. Give the 6’2, 200-pound son a #56 uniform and let him hit someone. If RB worked on his speed a bit, he would make a great NFL linebacker. We’d call him Hollywood Barnes.

The frustrated Spaniard once said he didn’t think he could ever win a major. Good thing he’s exceptionally skilled in soccer. Maybe a major mid-fielder for Real Madrid is his true calling. Can’t you just see the Aussie competing against Kelly Slater on the ASP Tour? We can. And we know the ladies could.

The 2010 PGA Tour Rookie of the Year was once a promising motocross prospect. The daredevil started riding bikes when he 3-years-old. He also picked up a golf club at about the same age. If the latter hadn’t happened, we’d be seeing a high-flying orange dreamsicle on a motorcycle.

The Iowa native grew up playing soccer, baseball, basketball and soccer in Cedar Rapids. His fellow PGA Tour contemporaries have talked about his basketball skills. But his trainer Chris Noss told us, “Don’t bet against Zach in a high-stakes ping-pong match.” So we won’t. Professional table tennis player it is.

Related Links: 11 Golfers Who Would Make It In The NFL