Golfers Weigh In on Wild First Round of NFL Draft 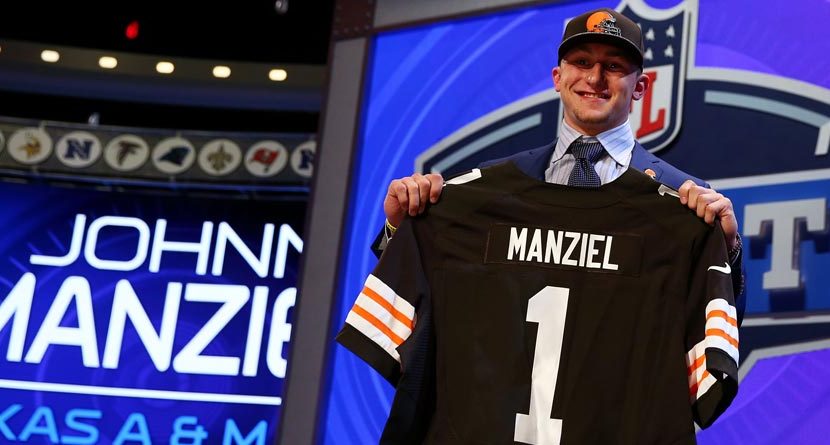 The first round of the NFL Draft on Thursday night was filled with surprises, trades, and one free-falling Johnny Football, keeping everyone on the edge of their seats. PGA Tour players were among the millions with their eyes glued to their TVs, and many live-tweeted their reactions to the madness that is the NFL Draft. Here are some of the best from the first round.

Kris Blanks was not only ready to watch the draft, but he was ready to get picked (not really). Unfortunately for Blanks, he’s still on the board after the first round.

About time for the draft. Think this is my last year realistically to get picked. I’m hoping for the best!!

No one was more up-and-down Thursday night than Cleveland Browns fan, Jason Dufner. He was ecstatic that his Browns had a shot at Clemson star receiver Sammy Watkins, but was left disappointed when they traded down with the Buffalo Bills.

Each year I get excited for the Browns draft day, and each year I watch them trade picks and end up drafting less then 6 players. Awesome!!!

The Browns eventually moved up from No. 9 to No. 8 and selected Justin Gilbert, cornerback from Oklahoma State, which confused, but delighted, Dufner.

Trade up?? I am confused.. Can we trade back again?

The one guy that Dufner was pushing for the Browns to pick all night was none other than, Johnny Manziel. Dufner posted the same photo of Johnny Football in a Browns uniform not once … not twice … not even three times. He posted the same photo EIGHT times with the hope that Cleveland would take him each and every time. Dufner eventually got his man when the Browns selected Manziel with the 22nd pick, after Cleveland’s third trade of the night.

Yes! Goodnight. Sleep on it! pic.twitter.com/O8lKbDGCfc

Among all the confusion and disappointment for Dufner, he did have some Dufner-like tweets as well.

Favre, of course, was not on the board.

Insider info coming in now, Browns trading all their picks so they can select this guy at 15. Cheers pic.twitter.com/LpxKTc5L6a

Neither was Deion Sanders. Sorry Duf.

Former Oklahoma State Cowboy Hunter Mahan was vocal on Twitter for much of the night, as well. He and Billy Horschel got into a debate about the Minnesota Vikings possibly drafting Johnny Manziel.

@HunterMahan…. I don’t think so. His style of play doesn’t fit with AP as your running back.

@HunterMahan… Don’t disagree. But I don’t think Manziel is the right QB. What do you think @ESPNRobertSmith??

Mahan apparently holds high standards for the NFL and was not pleased with the (few) commercials during the telecast.

Commercials? Really. Get it together NFL

One of the biggest moments of the first round came while Manziel was on the board when Jerry Jones and the Dallas Cowboys went on the clock. Possibly the most polarizing prospect available for one of the most polarizing teams in sports. Tour players and fans everywhere held their breath, including Texas native Jordan Spieth.

Here it comes.. Are we going to take #Manziel

I can’t take it, I’m leaving the house for the next ten minutes. #JerrygonnapickJohnny

Dallas did pass on Manziel, much to the liking — and surprise — of most. Instead, the Cowboys grabbed Zack Martin, an offensive lineman from Notre Dame.

THANK YOU. Someone locked Jerry in the bathroom without his phone.

That’s a great pick.. Extremely underrated position and one of the most important

Here are some of the rest of the best tweets from a wild first round:

Matty Ice, sipping on a post round cold beer on the patio at Cap City, gives a slight nod of approval of the Mathews pick. #ATL

Not sure why we have three starting tackles right now for Titans.

I think Johnny football is about to drink aquafina dry! #nervous

You gotta Love the Hugs between the players and the Commish! #DreamsDoComeTrue

Browns are gonna be fun to watch next year!!!!!!

The second round of the draft continues Friday at 7 p.m., with the Houston Texans back on the clock for the first pick of the night.