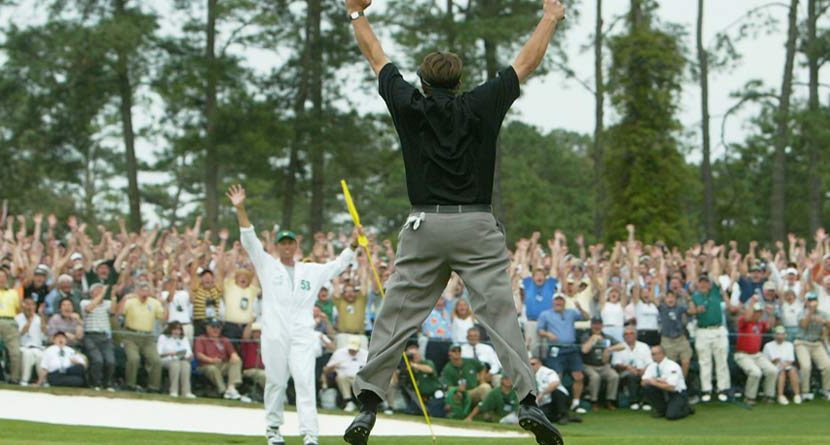 This week saw the culmination of the “Jeopardy!” Teen Tournament — a somewhat dumbed-down version of the quiz show where questions are answers. (How very Zen.)

The format of the tournament is simple: 15 teens are picked, slotted into five preliminary games for the opening round; the five winners and four highest-scoring losers move on to the next round for three games; the three winners then compete in a two-day final for the grand prize.

Well, Leonard was a finalist. He had amassed so much money over the first two games that it was impossible for him to be caught in the Final Jeopardy! round on Day 2. The tournament was his.

Like a boss, he made a statement with his response to the final clue in the category of “Military Men.”

Golf has had the rare moment like that. Consider these gems.

Craig Parry was a winner at Doral in 2004, needing to go to overtime to secure his win in the Ford Championship — his last of two PGA Tour wins. To do it, he holed out a 6-iron on the first playoff hole to beat Scott Verplank.

Afterward, he said, “My (caddie) brother said to me when we’re going down 178, he said, ‘I feel a Shaun Micheel from the PGA coming on.’ I just though I would be happy to knock it on the green and have an opportunity for birdie. Sure enough, knocked it on line and it went in the hole.”

Phil Mickelson had never won a major. He had been close far too many times, but by the time 2004 rolled around, it seemed Lefty might be cursed. That is, until the back 9 on Sunday at the Masters.

Mickelson made five birdies in the last seven holes, including a 20-footer at the last to win the first of three Masters titles. After the ball disappeared in the ground, Mickelson leaped about four inches into the air and shouted, “I did it!”

Who says the best walk-offs had to happen in real life? On the final hole of the U.S. Open, Roy McAvoy had sent almost every one of his remaining golf balls into the drink guarding the green. Armed with one last ball, McAvoy finally clears the drink, with the ball trickling into the hole. Pure triumph in defeat.

As a postscript to this entire story, I was on “Jeopardy!” in 2001. I was on the Teen Tournament. First, I should have won, but I didn’t know that a hippopotamus is what’s meant by the German word “nilpferd.” Second, they doubled the prize money the next year. Third, I can never be on the show again, unless invited.