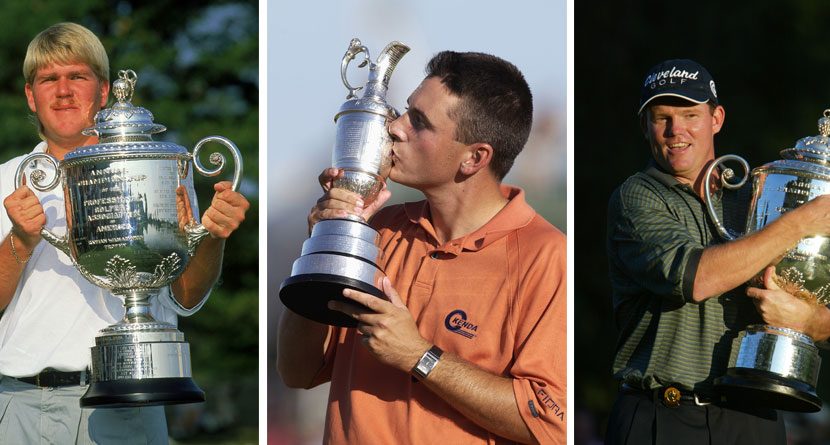 Ladies and gentleman, the second-best early spring tradition (the best being the Masters, of course) is upon us! The NCAA Men’s Basketball Tournament – more simply known as March Madness due to the frantic finishes, upsets and “Cinderella stories” that come out of it – is here. No one will ever forget N.C. State taking down Houston in 1983, or Villanova beating Georgetown in 1985, and everyone remembers the consecutive runs to the championship game made by Butler in 2010 and ’11. Everyone loves a Cinderella.

In golf, there have been plenty other than just Carl Spackler in Caddyshack. Here’s a look at the most memorable golf Cinderella stories, as well as a couple guys who will be remembered for falling just short:

Y.E. Yang – 2009 PGA Championship: For many, this marked the end of Tiger Woods’ run of major dominance. Yang became the first Korean-born player to win a major championship, a feat many assumed would be accomplished by Yang’s countryman, K.J. Choi. Yang came into Sunday trailing Woods by two strokes and while Woods struggled on the greens, Yang played brilliantly. He holed out for eagle at 14 and hit an incredible approach at 18 to seal a three-shot victory. It was Yang’s second win on the PGA Tour and for Woods, the first time he’d ever lost a major championship when leading after 54 holes.

Ben Curtis – 2003 Open Championship: Before the Open Championship in 2003, Ben Curtis had earned exactly one PGA Tour top-25 finish. He came into the Open as a 300/1 long shot but that didn’t keep him from shocking the golf world and claiming a major victory in his first-ever chance. Curtis’ one-stroke victory over Thomas Bjorn and Vijay Singh vaulted him from 395th in the Official World Golf Rankings to 35th. Curtis has won since on the PGA Tour, but has never duplicated his major success. In fact, in 35 major appearances since, he’s claimed just three top-10 finishes and has been cut 18 times.

Shaun Micheel – 2003 PGA Championship: To say Shaun Micheel came out of nowhere to win the 2003 PGA Championship is an understatement. Micheel came into the week as the 169th-ranked player in the world with no PGA or European Tour titles to his credit. He had won twice on lower-level tours since turning pro in 1992, but struggled to hold onto a tour card for most of his career. This particular week at Oak Hill, however, Micheel was the class of the field, holding at least a share of the lead from the second round on. His miracle 7-iron approach to the 18th green on Sunday to seal victory is still considered one of the greatest clutch shots in major championship history.

Jack Nicklaus – 1986 Masters: You can hardly call Jack Nicklaus a Cinderella in anything, but in 1986, he qualified. At 46 years-old, six years removed from his last major title and knocking on the door of the Senior Tour, Nicklaus provided the world with one last burst of greatness before father time caught up to him. Nicklaus started the day four shots back of Greg Norman and didn’t play spectacularly on the front nine. On the back nine, however, Nicklaus charged in historic fashion. With his son Jackie on the bag, Jack got around the back nine at Augusta in 30 shots and ended up firing a miraculous 65 on Sunday to win the tournament by one over Norman and Tom Kite.

Francis Ouimet – 1913 U.S. Open: Perhaps the most famous golf Cinderella besides Bill Murray, American Francis Ouimet made national news in 1913 when he defeated the heavily-favored Brits, Harry Vardon and Ted Ray, in the U.S. Open. The win was the first for an amateur in the U.S. Open and helped to rapidly increase the popularity of golf in the United States. As Americans saw it, they had beaten the Brits at their own game. Ouimet went on to win the U.S. Amateur in 1914 and again in 1931 but spent most of his life off the links, making a living in business instead of playing golf.

Orville Moody – 1969 U.S. Open: Moody would go on to have great success on the Senior Tour, but in 266 starts on the PGA Tour, Moody won just once. That one time came at the 1969 U.S. Open, where he came from three shots back of Miller Barber to claim one of the most unexpected major wins in history. Moody struggled with his putting for most of his career and was an early adopter of the long putter, though he did not use it during his win in 1969. John Daly – 1991 PGA Championship: Perhaps the most popular player on this list and the second-biggest Cinderella story behind Ouimet is John Daly and his remarkable win at the 1991 PGA Championship. Daly was a PGA Tour rookie that year and wasn’t even supposed to play in the PGA Championship. He was the ninth and final alternate into the field that week, getting in when Nick Price withdrew to be with his wife for the birth of their child. Daly put on a clinic all week both off the tee and around greens, winning by three strokes over Bruce Lietzke.

Larry Mize – 1987 Masters: When you talk about Cinderella stories, you talk about improbability. Larry Mize had won just once on the PGA Tour when he joined Greg Norman and Seve Ballesteros in a sudden-death playoff at the 1987 Masters. Ballesteros was eliminated on the first playoff hole, leaving Norman and Mize, an Augusta native, to battle for the green jacket. After Mize missed the green on the 11th wide right, he had a tricky pitch shot towards water left. Norman, who had missed a putt on 18 for a chance to win the tournament outright, had a birdie putt on the fringe. Mize’s pitch shot landed and rolled out hot. Most people believe it was headed for disaster. Instead, it hit the pin and dropped for birdie, breaking Norman’s heart at Augusta once again and giving the hometown kid the biggest win of his life.

Ben Crenshaw – 1995 Masters: Just four days after the death of his mentor, Harvey Penick, 43-year-old Ben Crenshaw started his 24th Masters. In a sense, Crenshaw was no Cinderella. Coming into the Masters in 1995, he had already won 18 times on the PGA Tour, including the Masters in 1984. That being said, there were no signs pointing to a return to glory for Crenshaw that week. He hadn’t won in more than a year and was 11 years removed from his last win at Augusta. Crenshaw made birdies at 16 and 17 on Sunday to cap a sentimental one-stroke victory over Davis Love III.

Close but no cigar:

Rocco Mediate – 2008 U.S. Open: Most golf fans under the age of 30 will remember the 2008 U.S. Open as fondly as their parents might the 1986 Masters. Rocco Mediate, the journeyman, the everyman… versus the greatest golfer the world had ever seen. Mediate was in contention all week and was the leader in the clubhouse when Tiger Woods matched him by making birdie at 18. Mediate famously chirped after the putt, “I knew he’d make it.” The next day, the two locked horns in an epic 18-hole playoff that decided nothing. They went to sudden death, where Tiger was just too much for Rocco. Woods claimed his 14th major title and Mediate, a place in sports lore.

Tom Watson – 2009 Open Championship: Just a year after Greg Norman attempted to make history at Royal Birkdale, Tom Watson bid to become the oldest major champion in history. He had a putt to win the tournament outright on 18, but failed to convert, then faltered in a four-hole playoff with Stewart Cink. Watson opened with a 5-under-par 65 on Thursday and held the 54-hole lead going into Sunday. It would have been Watson’s sixth Open Championship crown.

Greg Norman – 2008 Open Championship: Norman’s entire career seems to be a big “what if?” Never has there been a player as great as Norman with as little to show for it. His two major titles are nothing compared to the number he might have had with a little better luck. Norman finished in the top five in a major 18 times. He finished second or T-2 nine times. In 1986, he completed the “Norman Slam,” where he held at least a share of the 54-hole lead at all four majors, winning only the Open Championship that year. In the 2008 Open Championship, he held a two-stroke lead over Padraig Harrington but stumbled to a final-round 77 and a T-3 finish, further adding to his somewhat unfortunate legacy.