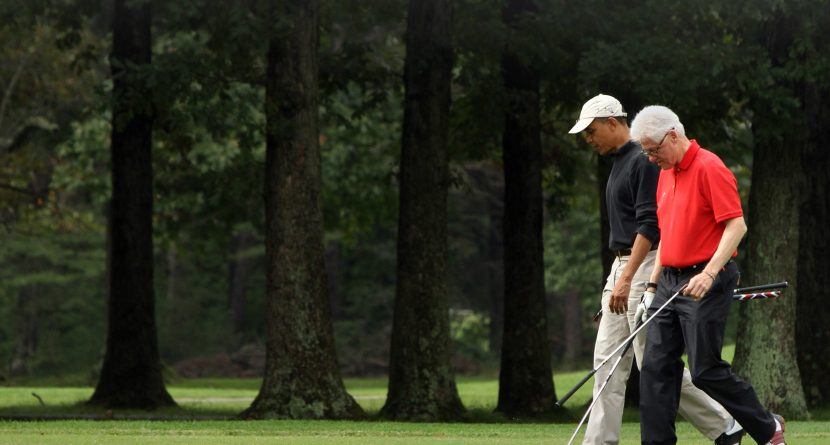 With President Obama deep into his second term (the ninth-straight term for golf-playing presidents), it’s clear that the game has a hold on the occupants of the Oval Office. But did you know that golf has actually helped shape presidential history?

A talented player. A member at Augusta National. And oh yeah, the President of the United States. Dwight Eisenhower was all these things from 1953 to 1961. While historians consider him a good president, he sure spent a hell of a lot of time playing golf.

All told, he enjoyed over 1,000 rounds while in office. In November and December 1958, he played at Augusta for 14 straight days. In July 1959, he played or practiced all but three days. But according to a Golf Digest article in 1953, Eisenhower’s golf obsession wasn’t a distraction from presidential business; it was the only thing keeping the president alive.

“He plays golf for vitally needed relaxation and exercise,” says the article. “He uses golf to help combat the fatigue and strain of what has been referred to as a ‘man-killing’ job.”

In that way, our 34th president helped set the expectation that our commanders-in-chief need time off. Although in the age of round-the-clock political coverage, I dare any future president to try to get in 125 rounds a year. As Eisenhower’s successor, John F. Kennedy knew the spotlight would be on him anytime he teed it up — especially because, as a political opponent of Ike, Kennedy had derided Eisenhower’s frequent play, calling him the “Duffer in Chief.” So he kept his rounds secret as much as possible, playing to what’s estimated to be a single-digit handicap.

The sneaking around continued until it became politically convenient to come clean as golf-obsessed. Faced with continued questions about where exactly the president was all day (and already saddled with a reputation for infidelity), JFK’s press secretary helped clear things up. The President wasn’t off hooking up with starlets or college girls — no, of course not! He was hitting the links. This public announcement of Kennedy’s golf habit gave him a good alibi, at least for a time. But as a player in more ways than one, JFK made Jackie Kennedy the ultimate golf widow.

I’ve read over 3,000 pages of biography on Lyndon B. Johnson, so I can confidently say: LBJ was an absolute maniac.

A social and political genius who saw opportunity in every personal interaction, LBJ turned his college newspaper into the most powerful organization on campus. Later, as a Congressional aide, he overtook a social club of his peers and led it with an iron fist, handing out favors and punishing opponents.

So when Johnson became president and realized that, as a golfer, he could spend four uninterrupted hours with political allies and foes, he jumped at the chance. That doesn’t mean he was a good player, though: a Life Magazine article at the time defined his style as “excessive power rather inaccurately applied.”

Adds historian Don Van Natta, “He really tore it up. He would take 300, sometimes 400 swings to get around an 18-hole golf course. He just wanted the feel of one perfect golf shot.”

But even when he’s a hacker, you can’t reject an invitation from the president. So when LBJ was pushing for the controversial Civil Rights Act of 1964, he used golf to his advantage, inviting reluctant senators to Congressional Country Club for “friendly” matches. Whatever Johnson said to them on the course—he had a way with profanities—the bill passed.

Related Link: Presidential Golf Facts You May Not Know