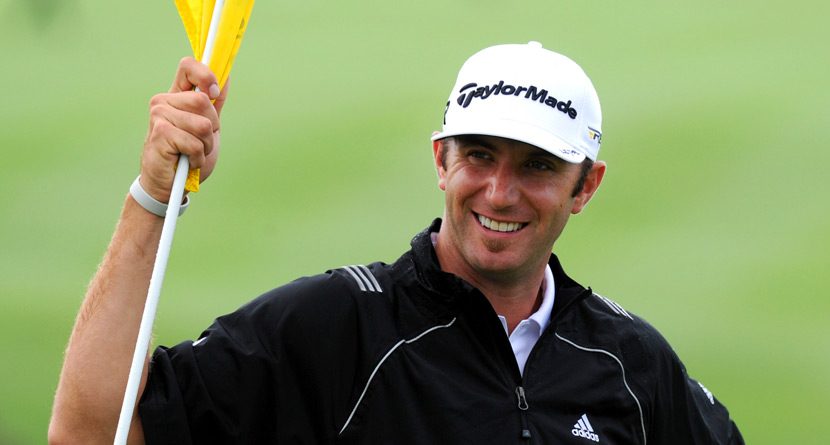 “I’m sticking with Graham DeLaet this week in Phoenix because I really, truly believe that he’s going to break through and soon.” – Golfstradamaus, 1/28/14

Well, it’s beginning to look like I can only pick bridesmaids, my friends. With his T-2 at the Waste Management Phoenix Open, that’s two straight second-place finishes for the man I’ve predicted would pick up his first win on tour by now, Graham DeLaet. I’ve said it before and I’ll say it again: A win will come in short order for the new Canadian god of golf.

Other than that, last week is one that Golfstradamaus would like to forget after some dismal performances from just about everyone but DeLaet. With the 0-fer last week, it’s time to make a return to the method of making picks that put up a three-week 4-6 performance to start off the 2013-14 season: picking with my heart and not my head. Grab your pencils, folks. Here are your can’t-miss performers this week.

While I might be accused of grabbing the low-hanging fruit here, I’m going to take Jimmy Walker. He has two wins this year on tour and currently leads the FedExCup standings. On top of his stellar play this season, his last three starts at Pebble Beach have resulted in two T-9 finishes and a T-3. Why not look at a guy playing this well and getting 25/1 odds this week? You’d be an absolute fool not to look at Jimmy Walker at Pebble. It’s really hard to not like Dustin Johnson this week at Pebble Beach. DJ played some superb golf Thursday-Sunday during the U.S. Open here in 2010 and always seems to be a contender in this event, winning it in 2009 and 2010 as part of four top-seven finishes in six career Pebble Beach Pro-Am starts. This year, he’ll likely be paired with his soon-to-be father-in-law, Wayne Gretzky, and is going off at 12/1. That’s a very good return on any bet this week for a guy as good at this track as DJ is.

Maybe Graeme McDowell hasn’t teed it up in competition at Pebble since his 2010 U.S. Open victory. And maybe he hasn’t played in this event since 2006. Feh, I say. That’s not enough for me to shy away from the Northern Irishman this week. In 2005, he finished eighth in this event so it’s not like he had no track record here before winning the U.S. Open in 2010. At 30/1 and playing well thus far in 2014, McDowell is a solid bet this week. Jason Kokrak is another guy I’m looking at this week in Pebble Beach. Kokrak has made just more than 50 percent of cuts this year, but when he has, he’s made the most of it, notching a top-20 or better finish each time. He finished ninth in this event in 2012 and could be poised to pick up that first career win. At 50/1, Kokrak is worth more than a passing look this week.

It’s hard to believe that Richard Sterne isn’t the favorite this week at the Joburg Open considering he’s won the last two times. Sterne will go for three in a row this week in his native South Africa, and for a guy who is the back-to-back defending champ, he is getting great odds at 20/1. Sterne in the Joburg Open has become such a sure thing that I wouldn’t be surprised if the strategy starts showing up in “easy money” how-to books. The favorite this week is a guy who is as close to a sure-thing as there is in golf when he plays at home: Charl Schwartzel. He is always tough to beat when he’s on his home turf, and this week should be no different. Schwartzel comes in as the favorite so don’t expect a huge pay out (he goes off at 7/2) when he wins, but if you pick him this week, you can brag to your friends about how smart you are.

He may not have won since 2011, but Hennie Otto is yet another South African with a good chance to claim victory in Johannesburg this week. Otto has played decently this year and has always been a pretty consistent player. His most recent win on the European Tour also came in South Africa, at the S.A. Open in 2011. At 50/1 this week, Otto is worth a look at home. Another guy who hasn’t won in a while that might just breakthrough this week at the Joburg open is Steven Webster. He hasn’t won since the Portugal Masters way back in 2007, but he has posted back-to-back top-five finishes at the Qatar Masters and the Omega Dubai Desert Classic. He goes off at 30/1 this week, offering the most bang for your buck on any one who actually has a chance this week.

There you have it, kids. I smell victory this week. You can’t keep Golfstradamaus down or in second place for long. This is the week I break back through to the win column. I can feel it. And so will you. In your wallet. Trust me.