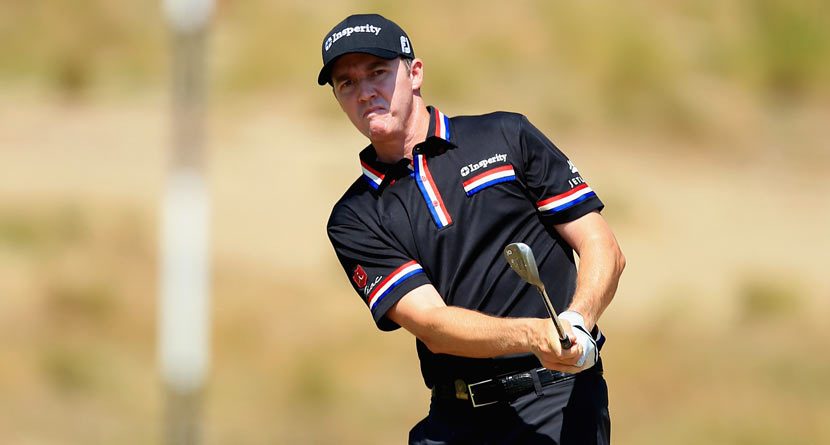 We’re officially halfway through the FedExCup playoffs as the PGA Tour heads to Cherry Hills Country Club for the BMW Championship. There’s been a bit of a shake-up in the points standings following the first two events, thanks to surprise wins from Chris Kirk (Deutsche Bank) and Hunter Mahan (The Barclays). This week, you can expect much of the same.

In a year full of parody, first-time winners and first-time-long-time winners, you’ve got to figure that trend continues at the BMW — and that’s why I chose a couple of guys in desperate need of a victory. I mean, seriously, who saw Chris Kirk winning in Boston last week? Sure, he’s won twice this year, but when Rory McIlroy is in the hunt on a Sunday, the edge has to be with him, right?

Anyway, it’s time to tell you who’s going to have a great week at Cherry Hills and who’s going to win big. With just two weeks left in the 2013-14 PGA Tour season, the FedExCup and its $10 million prize is still anybody’s game. If you want to make some money this week, you’ll listen up.

The first name this week for you guys is Phil Mickelson. With the tour making its first trip to Cherry Hills since the 1985 PGA Championship, I’m going with experience over recent performance with this pick. Mickelson won the U.S. Amateur here in 1990 and is one of the few players in the field with any tangible experience on the course. He’s really only played well twice in the last six months (T-15 at the WGC-Bridgestone Invitational and second at the PGA Championship) but he’s still Phil Mickelson. He could go off and any moment, and with experience on his side at Cherry Hills, this could be his week. At 30/1, you’d be crazy not to put something down on Lefty. It’s not too often you can get a Hall of Famer at those odds.

My second pick this week is a guy I’ve taken a lot in the past and had little success with. I was kicking myself for not taking him last week and I refuse to make the same mistake two weeks in a row. Billy Horschel showed a lot of what he’s made of at the Deutsche Bank, finishing runner-up and jumping from 82nd in FedExCup points to 20th. Another solid performance this week would give Horschel a spot in the Tour Championship, where he finished T-7 last year. I think Horschel shows us what kind of competitor he is and bounces back in Colorado. At 60/1, you’d be remiss not to throw down at least a couple shekels on him this week.

The third pick this week is a bit of long shot. Russell Knox hasn’t really done much to warrant a pick, but I’m still going to take him. He’s played some solid golf four of the last five weeks and was a popular name early in the year, thanks to a very good start to the season. It seems like every week there’s someone you haven’t seen in a while hanging around the top of the leaderboard, and this week it could be Knox. Honestly, his recent pattern of finishes is similar to the one Chris Kirk was on before winning last week at the Deutsche Bank. At 100/1, Knox is a talented player who deserves a look.

Tom Watson picked him and now it’s time for Keegan Bradley to step up and reward him for it. It hasn’t been a great 2014 for Bradley, but he has put together some really good rounds recently. It wouldn’t be a shock to see him win the BMW Championship — but it wouldn’t be expected the way he’s played this year, either. Despite a season with more valleys than peaks, I think Keegs comes out guns a-blazin’ at Cherry Hills, and picks up a much-needed win. At 30/1, a win for Bradley would make you very happy.

Finally this week, I’m taking Jimmy Walker to collect his fourth win of the year. Walker’s 2013-14 season is one that anyone would envy. He already has three wins and when he’s made the cut, hasn’t finished worse than T-37 since the calendar flipped. In his last three starts, Walker has sandwiched a missed cut at The Barclays in between a T-7 at the PGA Championship and a T-9 at the Deutsche Bank. It certainly looks like the Baylor alum is heating up and at 30/1, you’ll be glad you listened to me when he wins at Cherry Hills.

That’s all for this week, kids. Best of luck to you. We all know the tour pros aren’t the only ones looking to hit it big at Cherry Hills. Until next time, go and choose wisely.