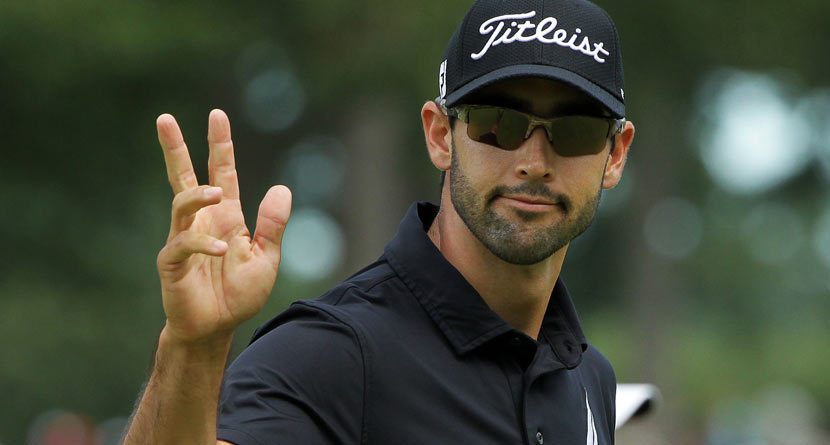 This week the PGA Tour rolls into Norton, Mass., for the Deutsche Bank Championship and leg No. 2 of the FedExCup playoffs. If history tells us anything, this week’s winner could be anyone and come from anywhere in the field.

Seven players — including Stewart Cink, Paul Casey and Morgan Hoffmann — played their way into the field this week at TPC Boston with strong showings at The Barclays. The first casualties of the FedExCup playoffs include past winners like Jonas Blixt and Nick Watney. The top 100 players in FedExCup points will be trimmed to 70 after this week.

This week will be tough to handicap for most — but not for Golfstradamaus. The crystal ball has spoken and if you pay attention, you might just learn something:

It’s not too often that a guy getting 80/1 odds is my first pick but that’s precisely the case for Cameron Tringale this week. If you like trends — and I do — then you have to be feeling very good about Mac Triangles this week at TPC Boston. Tringale has already had a career year with most of his success coming in the last couple weeks. After playing well but disqualifying himself from the PGA Championship, Tringale finished T-2 at The Barclays, the best performance of his career. I think Tringale stays hot this week and with a little luck, he may earn his first win.

Name No. 2 this week was also second last week at The Barclays — Jason Day. The Australian wunderkind struggled early this year with injuries that probably kept him from winning more than just the WGC-Accenture Match Play Championship. Along with his T-2 last week, Day also finished T-15 at the PGA Championship and is poised to collect another win. At 15/1, he’s one of the favorites but still offers a decent payday for those willing to pony up more than a few shekels.

Is this the week Jim Furyk finally gets that elusive win? Is this week he finally breaks through and returns to the winner circle for the first time since 2010? I think it has to happen and time is running out for the veteran. Furyk is no stranger to success in the FedExCup, winning the Tour Championship presented by Coca-Cola and the $10 million FedExCup in 2010. He’s finished second three times this year — three! — including at the Players and the RBC Canadian Open. At 25/1, you’d be nuts not to at least consider Furyk.

The Deutsche Bank Championship has produced mostly proven winners over the course of its existence and I expect that to be the case again this week. I really don’t want to pick Rory McIlroy this week, but I don’t feel like I have a choice. I’d rather be right and win a little money then be wrong and break even. McIlroy is still the one of the hottest things on the planet — falling somewhere between ghost chillies and liquid magma — which means that even though he’s only getting 9/2 odds this week you still have to pick him … right? Im going to, and I think you should, too. He did win this event in 2012, so it’s not like he doesn’t know how to get around this joint.

The last name I have for you this week is a bit of a sentimental one in the sense that I’m going to bet on him even though I don’t really think he’ll win. Could you imagine if Keegan Bradley got it done this week in Norton? The world would literally end … Okay, maybe not — but it would be huge for a number of reasons. Obviously there are his ties to New England and the Boston area, but it would also boost his confidence immensely going forward in the FedExCup playoffs. At 40/1, Bradley offers a tremendous return on investment for folks looking to make a decent pay day without giving up much.

That’s all for this week, kids. Best of luck to you — we all know the tour pros aren’t the only ones looking to hit it big in Boston. Until next time, go and choose wisely.