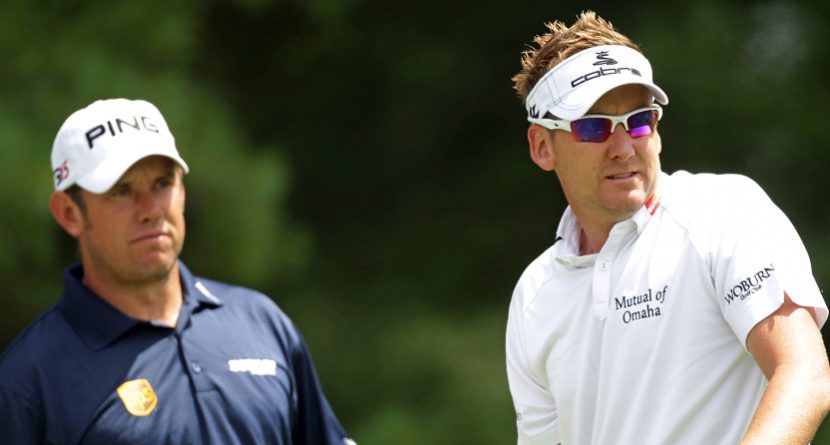 “Miguel Angel Jimenez is the clear-cut favorite here this week and is one of the two guys I really have my eyes on this week.” – Golfstradamaus 12/4

Miguel Angel Jimenez’s second straight win at the Honk Kong Open makes it three consecutive weeks of picking a winner for old Golfstradamaus. Please, please… hold your applause. If you’ve been paying attention, good for you! If you haven’t, there’s really nothing I can say to sway you, I suppose. If losing money is your thing, don’t let me stop you. For those of you still looking for the betting edge, Golfstradamaus is at your service.

The favorites in this event are obviously solid bets and 7/2 isn’t a terrible pay out if you don’t feel like risking much. Jason Dufner/Dustin Johnson, Harris English/Matt Kuchar and Ian Poulter/Lee Westwood are all going off at 7/2. Any one of these three pairs are worth a look but if you can only put your shekels on one of them, Poulter/Westwood are probably the best.

If you’re looking to make a little more dough this week, I recommend the American duo of Chris DiMarco/Billy Horschel.  Horschel had a really good 2013 and DiMarco is the quintessential professional, making them a formidable pair in this small field, team competition. At 20/1 they’re paying well for a minimal bet. Putting down $10 to win $200 is not a bad idea this week.

Also going off at 20/1 are Canadians Graeme DeLaet/Mike Weir. Weir hasn’t been much of a threat since he won the Masters in 2003 but has played okay more recently. DeLaet, on the other hand, had himself a breakout year in 2013 would probably carry this team. Weir is still pretty good and with a good week, team Canada could just pull up an upset.

In the wake of Nelson Mandela’s passing, this tournament is certainly a big one for the nation of South Africa and I expect the native sons to play their hearts out this week, starting with George Coetzee. Coetzee didn’t play well at all last week missing the cut at the Alfred Dunhill but I still have faith that he could pull off the win this week. Paying 15/1 as the favorite is a steal if you’re willing to throw down something, anything on him to win this week.

Richard Finch has finished second and T8 in his last two starts on the Euro Tour and is the hot hand in the field this week. He’s not getting much respect at 25/1 considering his play as of late, so if you’re willing to part with a little scratch to make a bunch, Finch is a very smart play this week in South Africa.

On a whim, I’m going to throw out Shiv Kapur to you guys. He had a shot at winning the Honk Kong Open last week before Miguel Angel Jimenez took it away from everyone. Kapur has grown from the guy everyone had to Google while they watched the first round of the Open Championship to a pretty solid player on the Asian/European Tour. In his last two events, Kapur has a win and a second on the Challenge Tour and a 12th on the Euro Tour. At 30/1, he’s definitely worth a look.

The Thailand Golf Championship is probably the best field of the three events being played this week with a slew of major winners and guys you expect to win one or two in the future. Some of those guys are even getting less respect then normal.  Bubba Watson paying 15/1? Hunter Mahan at 20/1? Justin Rose at 13/2? Any of these guys would be great picks this week but the one I’m going to go with is Rose. Bubba might be hotter coming off a good finish at World Challenge, but his play was up-and-down all week and he doesn’t usually play so hot overseas. For me, Rose is the natural pick from this group.

The other two guys I expect to shine this week are Americans Michael Thompson and Brooks Koepka. Thompson picked up his first career win last year and played pretty well all season, finishing the year with more than $1.7 million in earnings. Koepka got his card in 2012 and has four Challenge Tour victories to his credit. He strung together four consecutive finishes of T28 or better and banked some serious cash in the process. Thompson and Koepka go off at 50/1 and 40/1 respectively, these two could pay big if either of them are able to grab their first career European Tour victory.

That’s it for this week, kids. As always, go and choose wisely…