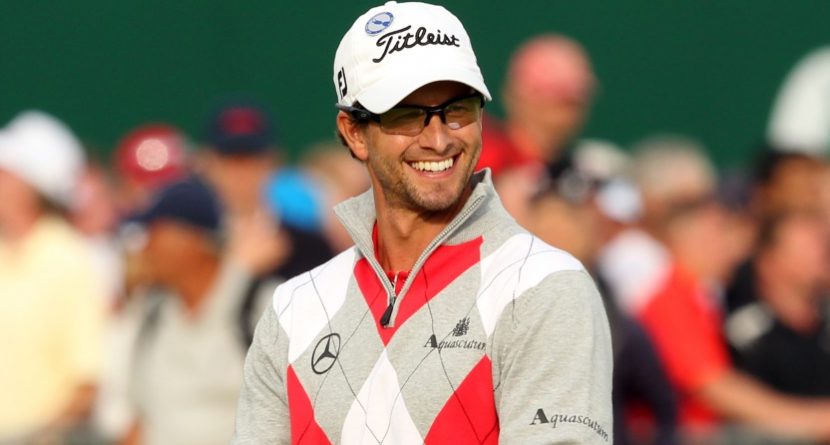 Alright, so last week was a bit of a mixed bag for Golfstradamaus. I made some pretty solid calls at the DP World Tour Championship but got absolutely nothing out of my picks at the OHL Classic. What are you going to do? If you get bit by a shark, are you going to quit surfing? I didn’t think so.

I didn’t think Henrik Stenson would win the DP World Tour Championship, but I did correctly predict he’d hold on to the money title. All four of my picks made the cut and played pretty well. The OHL was a completely different story. Mark Wilson and Trevor Immelman missed the cut, while John Huh and Matt Every played some pretty ho-hum golf and finished mid-pack.

But it’s time to move on. It’s time for a rebound this week. The world’s best (by country, that is) are in Melbourne, Australia, for the ISPS Handa World Cup of Golf at the Royal Melbourne Golf Club, and the field is stacked with proven winners. But who will rise to the top? Golfstradamaus is at your service.

For the individual contest, it’s going to be incredibly tough to top hometown hero Adam Scott and, contrary to Golfstradamaus form, I’m not going to pick against the Masters champ. While a Scott win would only pay 3/1, anyone would be bat-poop crazy to pick against a guy who is playing at home and has won in back-to-back weeks coming into the event.

If you want to ride the hot horse and still make some money this week, take a close look at Frenchman Victor Dubuisson. Coming off his first career win in Turkey and a solo third at the DP, and going off this week at 25/1, putting a couple notes on Dubuisson is solid choice and one that I HIGHLY recommend. Thorbjorn Olesen is going to have a great week this week. Mark my words. Or better yet, cash the check. Olesen hasn’t shown any signs recently of doing anything great any time soon — he finished T-17 at the DP last week following finishes of T-29 and T-31. But the young Dane finished T-6 at the Masters back in April and has some serious talent. At 40/1, he’s a solid return on a minimal bet and worth a look. More importantly, pairing with Thomas Bjorn in the team competition could be a big-time deal for the nation … but I’m getting ahead of myself.

A couple other names with solid returns this week are Jonas Blixt (40/1), Chris Wood (50/1) and Stephen Gallacher (60/1). All three of these guys have had a solid 2013, otherwise they wouldn’t be here, clearly. I won’t guarantee victory from any of these three but if you’re willing to put up a couple bucks, you could be rewarded handsomely for the risk.

I’ll be surprised, shocked, flabbergasted, etc., if the Aussies don’t win the team side of the competition this week. It doesn’t really pay (3/2) to pick them, and they are clearly the favorites. Everything is coming up roses for Adam Scott lately and Jason Day is a supremely-talented player who is close to breaking through for a major title (I’ll probably take him at Augusta next year … we’ll see though) and unquestioned greatness. Being as hot as they are and playing a home game is the perfect formula for World Cup domination.

As was previously mentioned, I really do like Denmark this week. The pairing of Thorbjorn Olesen and Thomas Bjorn is formidable to say the least, and could steal some thunder away from the Americans and Australians. Going off at 15/1 as a pair isn’t super high-paying considering how heavily favored Scott and Day are going into the event, but it’s a decent return if you’re willing to pony up something substantial.

If you’re really looking for a big payout, I recommend putting down what you’re comfortable losing on Thailand. I took Kiradech Aphibarnrat last week at the DP and he played well early in the week, but posted a 76 on Sunday that took him out of contention. His partner in the World Cup is five-time European tour winner Thongchai Jaidee. Jaidee is coming off a less-than-stellar performance last week but that doesn’t mean he’s not a threat to play well. If the Thais are going to make a run at the upset this week, I’d expect Aphibarnrat to anchor the effort, but that doesn’t mean Jaidee won’t surprise the best … and by that I mean me. At 40/1, they’re probably the worst remaining odds for any team that actually has a chance to win this thing.

Again, you’re all adults so I can’t force or convince you to do anything. If I could, I’d have a line of people eager to shovel my driveway this winter. The best I can do is make suggestions and remind you to go and choose wisely.