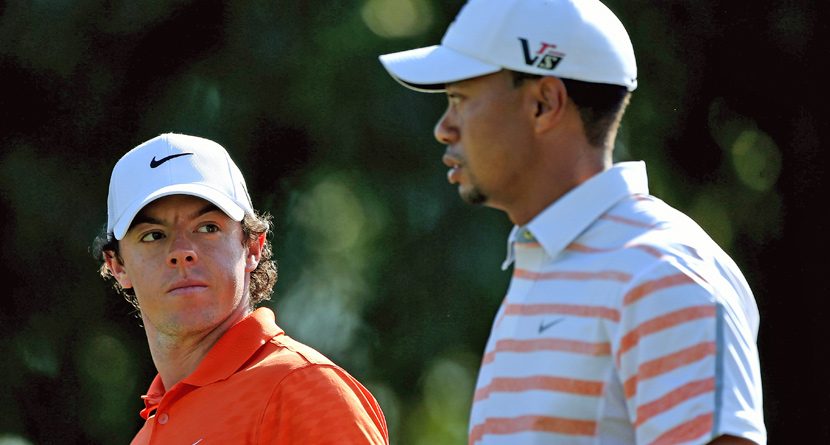 “Despite not having really shown too much muscle lately, perhaps this is the week that Rory McIlroy comes out of his slump. […] I expect big things from Rors this week. Going off at 6/1 are great odds for as sure a thing as this two-time major winner is.”

“While the European Tour is in South Africa for the Alfred Dunhill Championship, there really is only one player worth throwing the dough on and that is Charl Schwartzel.” – Golfstradamaus 11/27/13

I really don’t know what else to say here. When you’re good, you’re good, right? For those of you who listened to old Golfstradamaus, I hope you enjoy the extra shekels this holiday season. Those of you who didn’t, eh, well… it’s like the old saying goes: “you can lead a horse to water but you can’t make it any smarter.”

With that in mind, I all but implore you to take stock in this week’s picks. Golfstradamaus is at your service….

Coming off two weeks of correctly picking the winner of three tournaments, I know you’re all expecting big things this week. I’ll start by taking last week’s winner Rory McIlroy. Rory got off the schnide by winning the Aussie Open, beating favorite Adam Scott with a clutch birdie on 18 and looks to build on that performance. At 6/1, these are some of the highest paying odds I think you’ll see on Rory this year. Unless he’s in a field with Tiger, he’s probably going to be the favorite, so I recommend striking while the iron is hot.

Speaking of Tiger Woods, you’d be a fool not to pick him this week. It’s his tournament, after all. Woods may not have the majors to his credit in recent years but he does have a bunch of wins. This is a tournament he always plays well in and while picking him is only paying 9/4, it still provides a decent return on a bigger bet.

Jordan Spieth is the next big thing. He’s already a proven winner on the PGA Tour and has turned enough heads to be in this elite field this week. Who says he can’t outshine the likes of Rory, Woods and Watson? I certainly think he can and my track record has been pretty damn good. Spieth goes off at 20/1 and for a guy with this much talent in a field this small, that’s a solid return even on a $10. You’d be crazy not to give Jordan Spieth a look this week.

My last pick this week is Bubba Watson. This tournament very much has an exhibition feel to it and I expect Bubba to get big this week. The 2012 Masters champ didn’t have the greatest 2013, but that doesn’t mean his game and personality will fail him this week. At 30/1, Watson is a huge return for a minimal bet and one worth taking the risk on. Clearly he hasn’t been playing very Bubba-like as of late, but this is still a major winner and a multiple-time PGA Tour champ in a small field paying 30/1. So, yeah…duh.

First of all, I want each and every one of you to run out and put at least $10 on Thaworn Wiratchant, Peter Senior and Dawie van der Walt. Seriously, 500/1? Three hundred-to-one? Damn, I’d bet on ME with those odds and I’m not even a single-digit handicap. These guys are all pros, especially Senior, and the idea that they’re getting this little respect is astounding to me. I’m sure none of these guys will win and I’m not picking them to do so. I promise, if any of them do, I won’t chalk it up as a win but seriously, how can you not put down a fin on these guys? Five bucks to win $250? Yes please.

It’d be very difficult to see Henrik Stenson playing poorly this week, so I’m going to have to take him as the favorite to win this tournament. He’s only paying out 3/1 but you’ve got to figure the way he’s been playing that’s damn-near guaranteed money. Stenson is a little banged up and after his long and lucrative summer and fall, it’d be easy to see him slow down a little this week. I don’t think he wins, but he’s certainly the safe bet.

One guy I am expecting a big week out of is American Peter Uihlein. Uihlein has already won on the European Tour and has impressed in dozens of other tournaments. This week is a great time for the young star to shine and for you to make some money off of it. At 50/1, Uihlein isn’t getting nearly the respect from Vegas that I believe his game and play commands. If he can find a way to victory this week, it could be just as big for you as it will be for him.

Since I have had a mancrush on Martin Kaymer since 2010, I’m going to pick him to have a good week though I warn you, dear friends, that this is solely coming from the heart and not the head. The head is ignoring the fact that Kaymer hasn’t done much before or after his clutch performance at the Ryder Cup last fall. As a fan, I’d like to see that change, obviously, and with the hot streak I’ve personally been riding with my picks, hopefully I can curry some favor with the golfing gods and get my boy back on track. At 15/1 he’s getting a lot more respect that he probably deserves right now.

Alright, the Hong Kong Open field isn’t exactly loaded, though there are still a few names worth looking at here. Shiv Kapur played some amazing golf at the British Open in July …for about 10 holes, before returning to golf anonymity. Maybe this is the week he gets a win in a marquee event. He’s paying 40/1 which isn’t bad if you’d like to roll the dice with an unknown.

Miguel Angel Jimenez  is the clear-cut favorite here this week and is one of the two guys I really have my eyes on this week. Jimenez just accepted the role of Captain for the Euros in the inaugural EurAsia Cup in March and is a former winner of this tournament. As the favorite, the payout isn’t huge at 8/1, but it’s still the biggest payout for any favorite handicapped this week.

Lastly, take a look at Danish star Thorbjorn Olesen. Olesen has been a popular pick of mine lately and hasn’t played poorly while in my lineup. Really, he’s done everything but win and in this event where, at 2/1, the field is technically the favorite, it wouldn’t surprise me to see him kissing the trophy at the end of the week. At 15/1 for a player of his caliber, he’s certainly worth a wager.

There you have it, folks. Until next time, go and choose wisely!