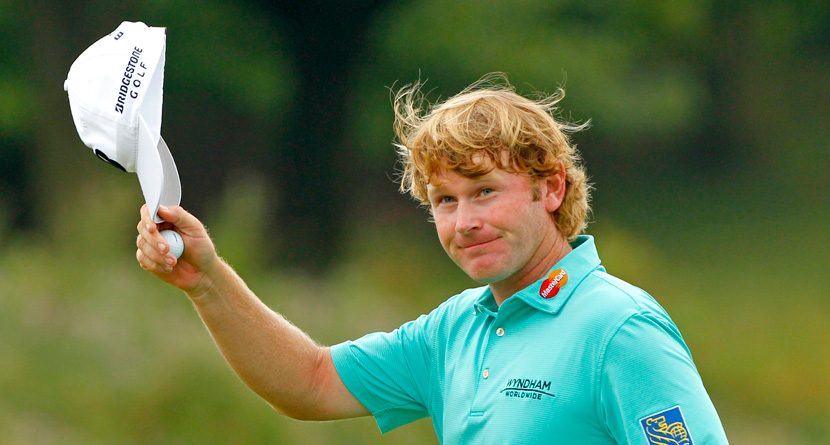 Last week, Kevin Streelman and Miko Ilonen came out of nowhere for surprise wins. Ilonen even took down my pick for the week at the Irish Open, officially putting him on my ‘S’ list for beating my guaranteed picks.

That being said, the past is the past, last week is history and there’s no better time than the present. It’s time for me to return to the winner’s circle in style and that’s why I’ve chosen five guys this week who haven’t tasted the sweet spray of victory champagne, or taken home some new-fangled beer drinking apparatus, in a while to help get me off the schneid. Here are your can’t-miss, guaranteed picks this week at the Quicken Loans National.

The first name this week has got to be Brandt Snedeker. After coming out guns a-blazin’ early in the U.S. Open, Sneds’ run at capturing his first major championship ended with back problems. Any questions, however, of a lingering issue have been put to bed by his 11th-place finish at the Travelers last week. He’s finally rounding into form this year and has a solid track record at Congressional, where he’s finished T-8 twice, T-5 and notched a T-11 there in the 2011 U.S. Open. At 20/1, Snedeker is a solid choice at Tiger’s tournament.

Next on the list this week is Keegan Bradley at 25/1. The kid from Vermont has been playing some really good golf lately and it’s about time he breaks through again. Bradley hasn’t fared too well in his lone trip to Congressional, missing the cut in 2011 at Tiger’s tournament. That being said, he’s always someone to watch for and I think this week in D.C., Bradley gets back in the winner’s circle.

There’s an old saying that goes, “Where there’s smoke, there’s fire.” Well, this week, where there’s Keegan Bradley, there’s Jason Dufer. Lame segue? Absolutely it is. Anyway, Dufner is getting 30/1 and despite not playing his best golf at the U.S. Open, he did take last week off to recharge his batteries and I really do expect big things from him this week at Congressional.

Another name looking for a win this week in the nation’s capital is Jason Day. I picked him earlier this year at the Masters and the U.S. Open — both times, he disappointed me. That being said, he was injured in Augusta and he did finish T-4, two shots back of normal human beings Rickie Fowler and Erik Compton, and nine shots back of the piece of highly-tuned German precision engineering that is Martin Kaymer at Pinehurst. I think it’s Day’s time to shine this week at Congressional and despite only getting 12/1, he’s certainly worth a wager this week.

Finally, I’d like everyone to give Nick Watney ample consideration when they fill out their cards for this week. Sure, sure … he’s been a shell of himself since he switched from Titleist to Nike, being shut out of the winner’s circle and missing 12 cuts in the last two years. Compare that to his run from 2010-2012, when Watney won four times and only missed eight cuts. That being said, Watney had a really good week in Hartford, showing flashes of the brilliance that was once commonplace for the California native, shooting 65-69 on the weekend. On top of that momentum, Watney won this tournament when it was held at Aronimink in 2011 and this week is getting 60/1 for a win. You’d certainly be remiss to pass on Watney this week.

There you have it, friends and degenerate wagerers. As usual, I have to remind you that I can only make suggestions and any poor decisions frowned upon by your significant other cannot be blamed on me. Until next time, go and choose wisely…