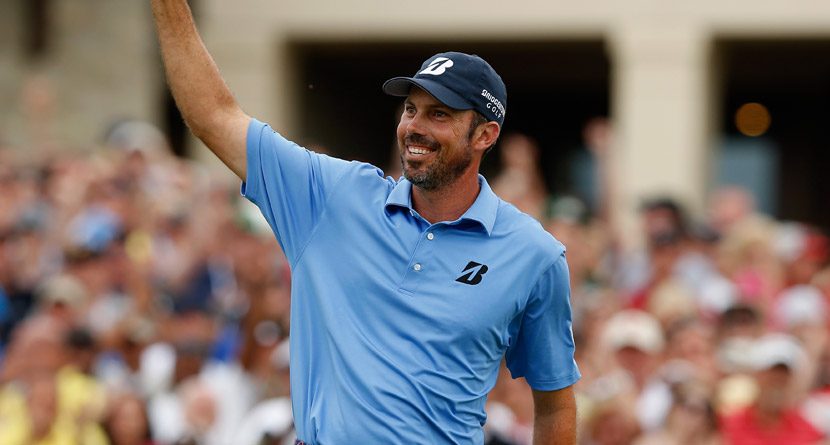 “If you do something wrong, do not keep looking back and feeling ashamed of it; it’s what is happening now that matters” ― Rory Leech

I have no idea who Rory Leech is but my guess is that, like Golfstradamaus, he is a very wise man. I mean, you have to be wise to have your name pop up in an Internet search for “quotes about being wrong,” right?

Either way, last week wasn’t my best. I mean really, who’d have thought Steven Bowditch would be 12-under-par after two days and hold on for his first career win? Anyway, as the wise Rory Leech said, it’s what’s happening now that we care about and this week the PGA Tour moves across the state of Texas to the Shell Houston Open. Lucky for you, I’ve got the guys you need to pay attention to this week right here.

The first name I’ve got for you in Houston this week is Dustin Johnson. DJ is one of the top players in the game today and has had an incredible 2013-14 season. He won the WGC-HSBC Champions late last year and has finished second twice in recent weeks. Johnson finished T-4 in this event last year too, adding to my confidence that he’ll have a good week, and perhaps, pick up his second win of the year. At 12/1, he’d be the favorite this week if Rory McIlroy weren’t in the field.

Graham DeLaet came close, twice, to picking up the first win of his career this season and cashing in for Golfstradamaus. After a stretch of five tournaments where he finished T-7, T-6, T-8, T-2 and T-2, DeLaet had three straight weeks outside the top 30. His last start was at the Valspar, where he got back on the top-1o train, finishing T-8. I still think DeLaet is the best player in the game without a win right now and he’s getting 30/1 money this week — not bad for a guy who everyone knows is going to win soon.

Matt Kuchar has built his reputation on consistency and in 2014 that’s exactly what he’s been. In 11 starts this year, Kuch has finished inside the top 10 eight times in 11 starts. In his last two visits to Houston in 2010 and 2011, Kuchar notched back-to-back T-8 finishes. With the Masters looming, a win would go a long way in boosting his confidence as he tries claim his first major title. At 20/1, Kuchar is no secret this week, but he is a pretty safe pick.

Another guy who, like DeLaet, would continue the trend of first-time winners on the PGA Tour, is Jason Kokrak. Known primarily as a bomber, Kokrak has improved his play greatly this year, collecting seven top-20 finishes in 12 starts. His best finish came just two weeks ago at Arnie’s place, when he gave Matt Every and Adam Scott a run for their money on Sunday. I don’t know if that win comes in Houston, but it does come soon, and at 50/1, Kokrak is certainly worth a couple shekels this week.

My sleeper this week is a guy who hasn’t finished worst than T-31 (well, except for his three missed cuts) in 10 starts this season. Chris Stroud has yet to win on the PGA Tour but he’s played great this year. His worst finish is that T-31, which came two weeks ago at Bay Hill. Before that, he was a top-20 machine, finishing there or better in all six tournaments in which he made the cut. Twice this season he’s finished third. Stroud goes off at 80/1 this week, which would be a fantastic payday should he continue the aforementioned trend of first-time winners on tour.

That’s it for now, folks. I must return to my secret lair and consult my crystal ball and large, leather-bound books of knowledge and wisdom before the Masters next week. Until then, friends and degenerate wagerers, may your drives be straight, your tales be tall and your wallets be fat.

Other Hot Links:
– Nike Releases Scripts for the 2014 Masters
– The Last Time Tiger Woods Wasn’t In the Masters…
– A Look Inside The Green Jacket
– Photos: Golf Lover Paige Ocktobur
– It Takes Two: Friends Team Up For Amazing Trick Shot