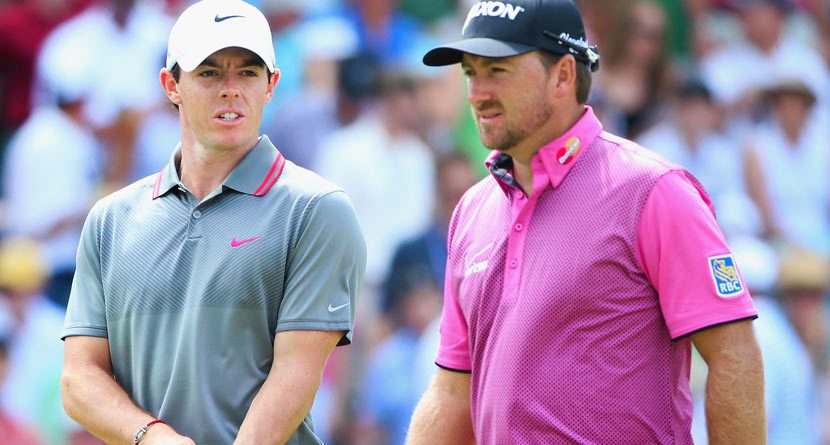 Well, I guess the scenario where Jason Day doesn’t contend is when literally no one else in the tournament contends. Seriously, Martin Kaymer? Nine-under and win by eight? Those are numbers reserved for Tiger Woods and Rory McIlroy. If Kaymer hadn’t been born, then Jason Day certainly would’ve been in the mix … not that I’m saying I wish Martin Kaymer hadn’t been born, because I really do like him, just not when he blows the field away or beats my pick for the week.

Anyway, there’s no sense in living in the past when there’s so much golf going on this week. The PGA Tour is in Hartford for the Travelers Championship and the European Tour is in Ireland for the Irish Open. If you want to know who’s going to have a big week, I suggest you keep reading.

The first name I’ve got for y’all this week is probably the most obvious pick in the field. Bubba Watson loves the Travelers Championship. He picked up his first career win there in 2010 and has collected three top-six finishes at TPC River Highlands in his career. He had a shot to win last year but collapsed late. Odds are, Watson will have another good week in Connecticut and at 12/1, you’ll want to put a couple bucks on Bubba.

The next name on the list comes with a bit of a “proceed with caution” warning. While he did finish T-4 last week in Pinehurst, I’m not entirely sure Brooks Koepka can translate his success in a major to a win the following week. One one hand, he’s young and rough around the edges. On the other, Koepka might be just the guy to ride the wave of momentum and collect his first win on the PGA Tour. At 50/1, Koepka is a great choice if you’re willing to take the risk on an unproven commodity.

Similarly to Koepka, I think Erik Compton is a high risk-reward pick this week at River Highlands. The two-time heart transplant recipient is coming off a career-best T-2 at the U.S. Open and is poised to breakthrough. While there may be some concerns over his stamina following the week in Pinehurst (after all, the man is on his third heart), I don’t think they’re enough to keep Compton from playing well. He’s also getting 80/1 money this week, which is an excellent return on a low-risk wager.

Another name that will probably go really low in Hartford is Hunter Mahan. The 2007 Travelers champ hasn’t been playing good golf by his standards, but a return to Hartford could be the cure for all that ails him. Mahan has owned TPC River Highlands. Along with his win in 2007, Mahan has fired rounds of 63, 62 and 61. He’s also the all-time money winner in the event’s history. And, as if you needed anymore reason to pick him, he’s getting 30/1 money. Seems like a no-brainer to me.

Now that he’s actually been re-united with his clubs in time for the tournament, you’ve got to go with Rory McIlroy this week at the Irish Open. I don’t want to say this event will be a lay-up for the Northern Irishman. He has played some really good golf since his split from Caroline Wozniacki and is only getting 4/1 this week, making him the runaway favorite. Still, he’s pretty close to a sure thing and that means he’s worth a some serious consideration.

Even through Rory is the favorite, Graeme McDowell might be your best bet this week in Ireland. Like McIlroy, McDowell is playing a bit of a home game and should perform well. As far as I’m concerned, McDowell is the smartest betting play at the Irish Open since McIlroy is only getting 4/1. McDowell is getting 15/1 money and is nearly as sure a thing as McIlroy. Plus, G-Mac has been practicing with his own clubs all week. Thanks to United Airlines, Rory has not.

One week after playing some really good golf at Pinehurst, Victor Dubuisson looks to stay hot at the Irish Open and collect his second career win. Many people believe that Dubuisson can have the same affect on French golf as Seve did in Spain, but if he’s going to, he needs to win more. He’s played well but hasn’t visited the winner’s circle since the Turkish Airlines Open late last year. This week, he’s getting 20/1 and should be paid attention to.

The final name this week in Ireland is Paul Casey. The Englishman has played some really good golf lately on both the PGA and European Tours and it’s about time he picks up the elusive win. While it’s still a weak field compared to the one in Hartford this week, Casey will still have to beat the likes of McIlroy, McDowell, Stephen Gallacher, Rafael Cabrera-Bello and Dubuisson to claim the title. At 20/1, he’s not a bad choice at all this week.

That is it for this week, kids. Just remember, you’re all consenting adults who are capable of making your own decisions for better or worse. I can only make suggestions.