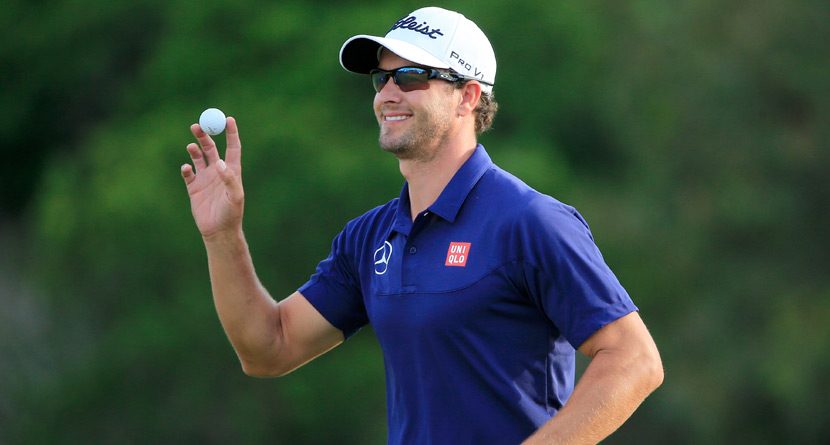 “Even the best fall down sometimes.” – Howie Day from “Collide”

That’s right, Howie Day, from time to time, the best do fall down. Last week at the Honda Classic, Rory McIlroy fell on Sunday and took me with him. It was a promising week, however. If you’re using my picks in pool play, you probably did pretty well. Luke Donald and Sergio Garcia finished T-8 to join McIlroy in the top 10, Chris Kirk came home T-12, and Graeme McDowell finished T-46. That being said, when you’re Golfstradamaus, a week without a win is like a week without sunshine.

Speaking of sunshine, hopefully there will be plenty of it in South Florida this week as the PGA Tour heads to its second World Golf Championships event in three weeks, the Cadillac Championship at Trump Doral. While the “Blue Monster” has undergone some recent changes, it shouldn’t keep the top names in the game from playing well. And if you’d like to make a little extra scratch this week, take to heart what I’m about to tell you.

Aussie Adam Scott has finished T-3, T-13 and T-6 in the last three WGC-Cadillac Championships and thus, can’t be ignored this week. Scott has done everything but win this year, playing some phenomenal golf as of late. He’s been in the hunt in every PGA Tour start he’s made this year, notching three top 10’s along the way. Since his win at the Masters last year, Scott has been on a tear and is currently the No. 2-ranked player in the world. At 12/1, a win this week would do wonders for his efforts to become the No. 1 player in the land and for your wallet. I think you have to look at Jimmy Walker this week. He rested last week and is ready to go at the WGC-Cadillac Championship. He still has won three of his last 10 starts and this week is getting 40/1 money for a win. If Walker continues to play as well as he has been, you may never see a payout that high for him this year. Walker is making the first start of his career in this event, and normally that might be a spot of bother, but with all the changes made to Doral, everyone will be seeing this course for the first time. You’d be crazy not to look at Walker this week.

Bubba Watson is off to a very hot start in 2014 and I think that run continues this week at Doral. Bubba finished T-2 here in 2012 and has played the Blue Monster pretty well in a handful of starts. This year, Watson has collected a third place, a tie for second, a win and a T-9 over his last five starts. Watson goes off at 25/1 this week, a solid payout for a guy who would be the low money favorite in a lot of events he plays in. With the way he’s swinging it right now, Watson is excellent choice this week. My last pick for the WGC-Cadillac Championship is Victor Dubuisson. The Frenchman has made a big splash on the PGA Tour this season, finishing second in dramatic fashion at the WGC-Accenture Match Play Championship just a couple weeks ago. This week he’s getting 50/1 money, which is excellent for someone playing as well as Dubuisson. Like with Walker, Dubuisson will be making his first start in the WGC-Cadillac Championship and also like Walker, that doesn’t scare me one bit. Dubuisson is good enough that he commands your attention this week, regardless of whether or not he’s seen the track before.

The rest of the PGA Tour heads to another Trump course, this one for the Puerto Rico Open. The event only awards 300 FedEx Cup points for a win, but those are still super valuable to guys like Chris Stroud. The Texas native has had a solid 2014 on the tour and is still looking for his first career win. While it wouldn’t put him in the Masters, a win is still a win. At 20/1, Stroud is the favorite this week so it shouldn’t be a surprise if he plays well. If you’re desperate for some extra cash and betting on the Puerto Rico Open this week, Stroud is your man.

I know this is a bit of a throwaway pick, but I’m really rooting for David Duval this week. Duval has already said this will be his last shot at regaining any of the glory he once had as a world No. 1 and major champion, and unless something big happens soon, it’s unlikely he’ll get the sponsor’s exemptions he needs to keep going. I grew up loving Duval and I want nothing more than to see him play well again. He hasn’t won since the 2001 Open Championship but has come close, with a T-2 at the U.S. Open in 2009 and at the AT&T Pebble Beach Pro-Am in 2010. At 150/1, Duval is obviously a long shot but I feel very confident that he plays well this week. Someone like Brooks Koepka could use a little boost this early in the season and playing in an event sans the game’s biggest stars could provide that boost. While a win here wouldn’t get him into the Masters, it would still be a first for the American. Koepka has played primarily in Europe, but has recently made some starts on the PGA Tour, having mixed results. That being said, he’s super talented and just waiting for a breakthrough. At 25/1, this week would be as good a time as any for it.

There you have it, folks. I hope this guide finds you well and that no one I’ve picked decides to collapse on Sunday this week. As always, friends and degenerate gamblers, go and choose wisely.