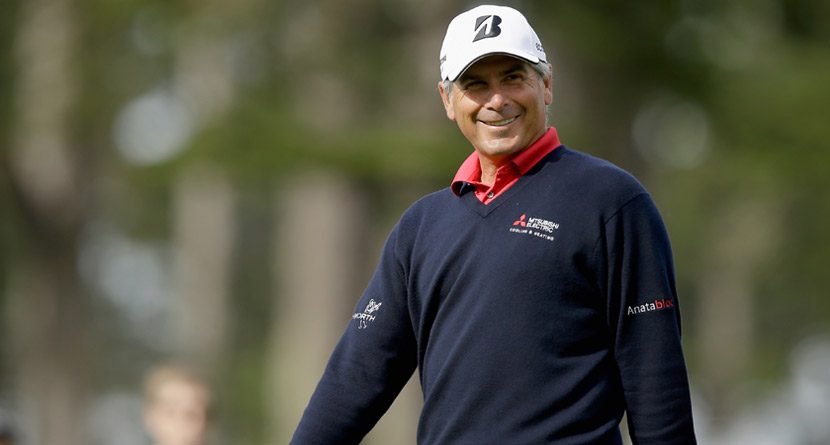 Last year at the Wyndham Championship, a talented young man from Augusta, Ga., collected his first career win. Since then, Patrick Reed has won two more times on the PGA Tour — including the WGC-Cadillac Championship at Doral — and has turned himself into one of the game’s biggest lightning rods following his proclamation that he was a top-five player in the game.

Since the comments, there hasn’t been much “top-five” to Reed’s game. That, coupled with the fact that Rory McIlroy is taking a week off to celebrate career major No. 4, means there will be a new winner in Greensboro this week. The smaller field also guarantees there will be some surprising names near the top of the leaderboard, mixing it up with the likes of Webb Simpson, Brandt Snedeker and other top players on the outside looking in at the Ryder Cup team. Got your pencils ready? Let’s go!

Expect to see some fresh faces vying for their first career win or their first win in a long time. The first name to watch is Brooks Koepka. I’ve taken Brooks before and he hasn’t played well when I’ve picked him — but he has played very well when I haven’t. Depending on your belief in things like curses or jinxes, you may stay away. I, however, feel like the stars will align and Koepka will collect PGA Tour win No. 1 this week. He needs it to get into the FedExCup playoffs, and at 40/1, a win would be huge for you, too.

Another guy playing good golf and getting 40/1 money in North Carolina this week is Billy Horschel. After a painfully slow start, the man in camo frog pants experienced a resurgence in June, rattling off six straight finishes of T-26 or better. He played well at Valhalla until stumbling in miserable conditions on Sunday, and won his only PGA Tour event last year in New Orleans. Based on his recent play, win No. 2 could be in the works soon. I think this week at the Wyndham is as good a time as any. He’d also be in consideration for one of Tom Watson’s three Ryder Cup captain’s picks should he come out on top.

The third guy this week has had a ton of success in this tournament and at this particular course at Sedgefield Country Club. Carl Pettersson hasn’t been heard from too much since the 2012 PGA Championship at Kiawah, but this week he has every opportunity to shine. A winner here in 2008, Pettersson also has two T-4 finishes since then. He also co-owns the course record (61) at Sedgefield. Because of this, you really would be remiss not to give a look at Pettersson. At 40/1, he offers a great return on investment at the Wyndham.

Brandt Snedeker doesn’t want — he needs a win this week. His 2014 campaign has been dismal — especially by the former FedExCup champion’s standards. He hasn’t won yet, which is pretty disappointing considering he’s won five times in the last three years. It seems, however, that his game is rounding into form at just the right time. A win would do wonders to raise his Ryder Cup stock and his confidence headed into the FedExCup playoffs. At 15/1, he’s the favorite this week.

The last name probably won’t win — but you never know. Fred Couples has already made two starts on the PGA Tour in 2014, missing the cut at the Northern Trust Open and finishing T-20 at the Masters. On the Champions Tour, however, Couples has played great, finishing no lower than T-13 at the Senior Open Championship. There aren’t too many players on the Champions Tour who can still play up with the PGA Tour guys — but Couples is one of them. It’ll take a miracle for sure, but at 125/1, stranger things have happened.

That’s all for this week, kids. Best of luck to you — we all know the tour pros aren’t the only ones looking to hit it big in Greensboro. Until next time, go and choose wisely.